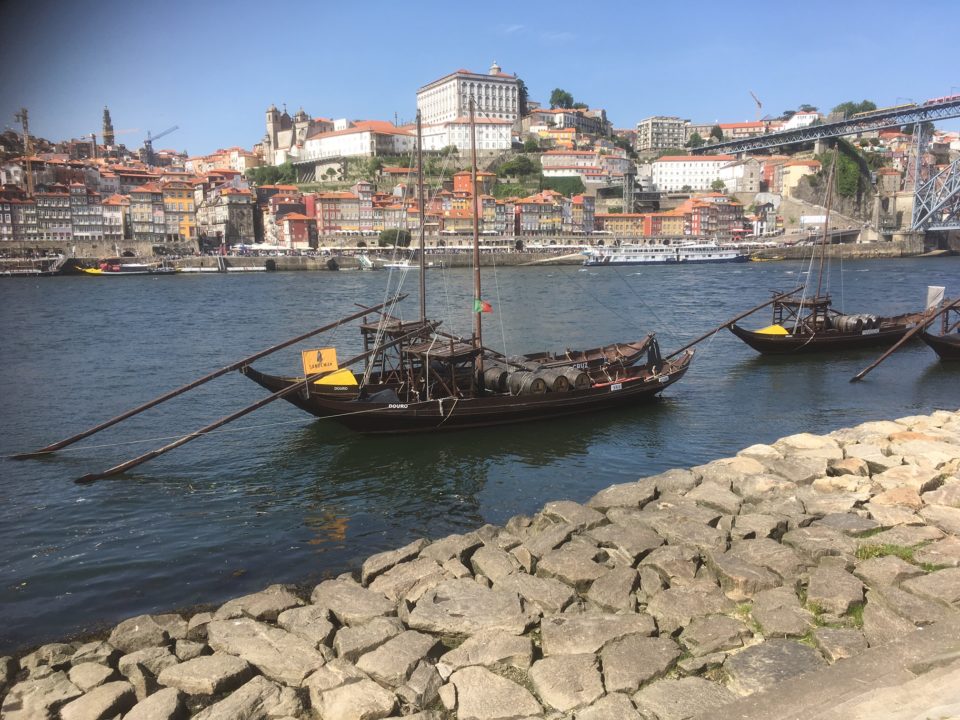 In the spirit of fact-finding journalism, AWBF General Manager Paul Cullen found himself recently in the northern Portuguese city of Oporto.  Rumour had it, wooden boats and wooden barrels still play an active role in that city’s thriving industry – making and shipping the famous ruby-red wine called ‘Port’.  Sure enough, both uses of the native European oak are still to be found in this impressive riverfront city close to the sea.

These barolos, or Douro River boats, were purpose-built for the challenging job of transporting the 600-kilo wooden barrels full of port wine from the distant vineyards in the steep mountainous interior.  The river was treacherous, with whirlpools, floods, rapids and constantly shifting sandbars.  The typical apégadas (open woodwork structure) allowed the skilled boatmen to control the flat bottom boats with a long oar known as an espadela.  Heavily laden with extremely valuable cargo, these nimble barges required as many as 12 crew to control them and many sailors lost their lives in the 300-year history of the port wine trade. Overtaken by safer rail and road transport, the timber craft are now popular tourist attractions and compete each year in a regatta on the Douro.

Though wine had been made in the hills of northern Portugal since Roman times, it was not until the late 1600s that English merchants began to export rich, strong red wines from the dry hillsides of the Douro River.  The river runs for almost 900 kilometres and forms part of the border between Spain and Portugal, but it is the section around Pinhao, around 125 km upstream from Porto that houses the finest quintas, or wine-making estates.  The distinctive rich flavour (and powerful punch) of port wine comes from the practice of adding pure alcohol before the wine has finished fermenting, leaving it naturally sweet and strong.  The wine is then aged for many years in either 600-litre barriques or massive wooden vats containing up to 20,000 litres.  The art of cooperage is alive and well in Porto, where companies like Taylor’s maintain traditional cooper’s workshops and magnificent cellars, open for public tours.

The cellars stretch for miles under the steep escarpments on the Vila Nova de Gaia, where many millions of litres of fortified wine slumber for decades until they are blended and judged ready for release.  Unlike red wine production, the barrels are not discarded after a season or two.  They are carefully scraped, refinished and returned to service.  Some of them are hundreds of years old.  ‘The smell in these ancient cellars is enough to intoxicate all by itself,’ Cullen says. ‘A man could die happy in there.’