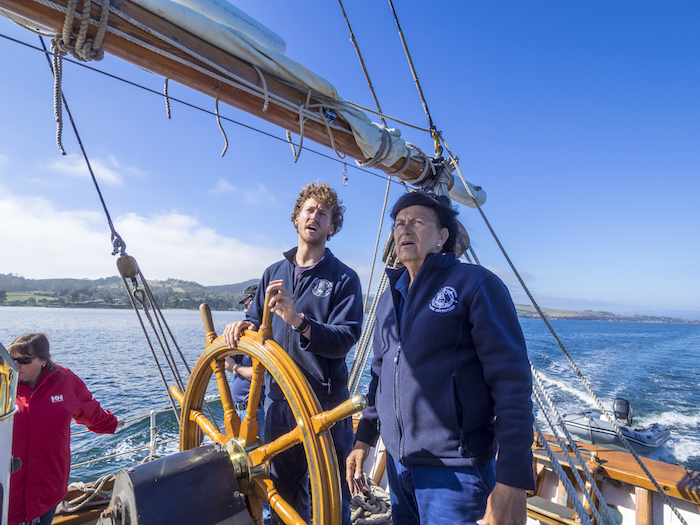 The sail training vessel Windward Bound might be dubbed ‘the hardest-working tall ship in Tasmania’, given that it’s at sea so frequently, crewed by a mix of student trainees, professional crew and the occasional passenger.  That would make Captain Sarah Parry the hardest working skipper in Tasmania, and that has been recognised by Sail Training International at their recent conference in Bordeaux, France.  Presented with the prestigious  Sail Trainer of the Year Award, the international organisation acknowledged Captain Parry’s extraordinary dedication to making real ocean-going tall ship sailing available to hundreds of trainee crew members over the years, many of whom have gone on to command ships of their own. Sail training programs aboard the Windeward Bound have produced more than 20 qualified masters in the last ten years alone..

At the annual awards ceremony I was presented with this award. This great honour frankly blew me away, and I have to say, in no small way, the honour also belongs to the entire group of wonderful young, (and older) people, past and present, who make up the entire crew, both afloat and ashore, of our great ship.Our collective success is due to all our collective efforts. – Sarah Parry

The two-masted brigantine is a home-grown Tasmanian success story.  With its keel laid in 1990 at a now-vanished wooden warehouse on the Derwent foreshore, from build to launch took six years, almost entirely staffed by volunteers.  Materials were gathered from dozens of sources, including recycled parts of older wooden ships. Since its launch, the ship has logged more than 100,000 nautical miles and has circumnavigated Australia. The square rigged vessel is a familiar, and favourite part of Hobart’s waterfront scenery.

The Windeward Bound Trust was formed and sail training for young people became our target. It is our belief that no young person should be denied the opportunity (of sail training – ed.) and it was resolved to specifically target the disadvantaged, whether disadvantaged by financial, social or other circumstances.

That ideal has been maintained ever since and the vessel still conducts ‘Outward Bound’ style sailing adventures for young people on a regular basis.  Details of their program are to be found on the Windeward Bound website. As a long-time participant and supporter of the MyState Australian Wooden Boat Festival, Captain Sarah Parry deserves our congratulations on a well-deserved award.