Westwind at Eighty – She’s Back! 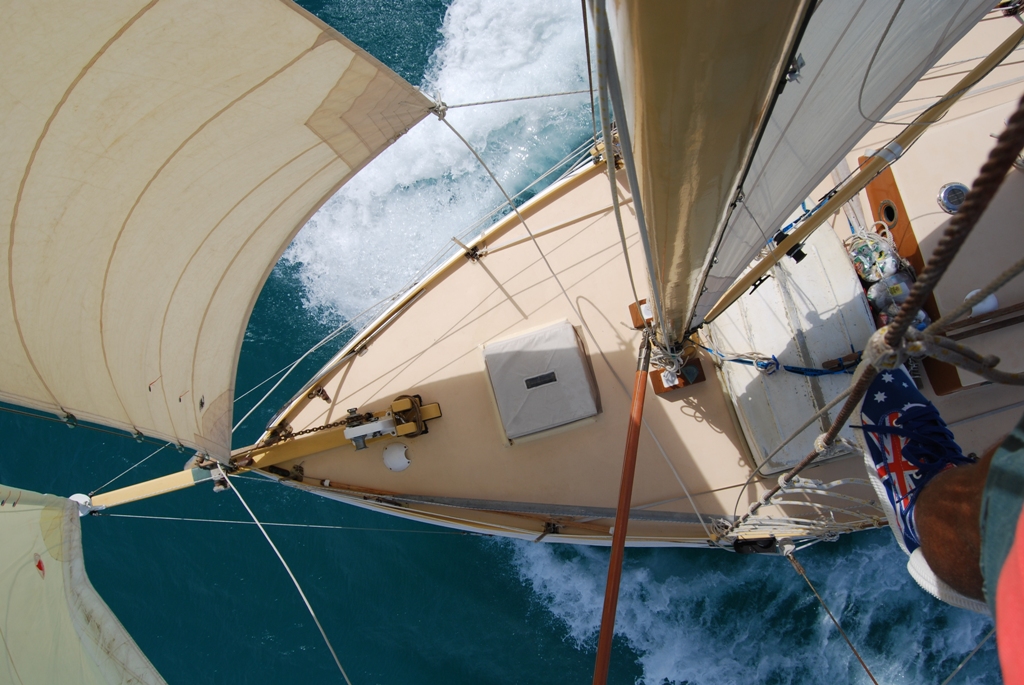 Westwind is a famous Jock Muir boat built at Muir’s Shipyard at Hobart’s historic Battery Point.  Owner and skipper Chris Dicker will be bringing her back to Hobart for the Australian Wooden Boat Festival 2017 and a celebration of her 80th birthday.

On important birthdays, we like to give Westwind a present or somehow treat her special. When she was 60, I rescued her from a very likely grave. She turned 65 during her rebuild and I gave her ten new bronze floors in her bilge. At 70, give or take a year or two, she shipped a new mate, my wife Gilli and together we relaunched her.

Where Do We Begin?

After 8 years out of the water she leaked like a sieve. The Huon Pine planking had hardly shrunk at all but the blue gum hardwood backbone had dried out quite a bit. It is surprising how small a gap can allow so much water to pour in especially when it is down deep.

Two weeks after the launch, we set off for the 2007 Hobart Wooden Boat Festival. We have heard of other people’s madness so why not try some of our own? We left Eden and were well and truly into Bass Strait and smashing into a south easterly when we realized that we were expecting too much of the old girl so soon after a major rebuild. The bilge pump was cutting in every five minutes and things were looking chancy. We nursed her back to Sydney, fixed the leak then sailed her gently north to the tropics.

I suppose Westwind was about 75 when we finally took her home to Hobart for the first time.  She had not sailed in Tasmanian waters since 1941.

As much as we enjoyed Tasmania’s cruising grounds, the tropics had corrupted our senses.  It was a hard job to tear Westwind away from her home paddock, but we finally did and were totally becalmed crossing Bass Strait. That stretch of water is not a place to wait for a wind, so we started our old two-lung engine and motored at 3.5 knots over a glassy sea for the next 48 hours. This we did on 42 litres of fuel, which is all we had on board. We visited many friends, family and festivals going north until we fell in with the south east tradewind about Frazer Island. From there to Cairns, Westwind had a bone in her teeth and we flew along day and night.

After 5 years in Cairns we still insist we are passing through. Indeed, since arriving in here we have done three trips to the Louisiade Islands at the south east tip of PNG and another trip to Hobart, including a circumnavigation of that Green Isle.

We are well into a major spruce up for the voyage once again to the 2017 Hobart festival, which is approximately 2,500 miles. It is a wonderful time when the whole coast comes alive with beautiful and sometimes unusual vessels with a bit more gloss than usual. You enter a bay and there is one anchored over there in the corner. She is almost certainly heading down south and the closer you get to Hobart the more apparent these special vessels become until you simply can’t get away from them.

2017 is a special birthday for Westwind, as she turns 80. Her keel was laid in 1935 and she was launched in 1937. Designing and building a beautiful and functional sailing vessel out of exquisite Huon Pine, Jock Muir must have been moved and inspired by what he had created. We are very happy to keep his first boat alive and in use. She has also been our only home for the past 11 years.