Food and Drink at the Australian Wooden Boat Festival 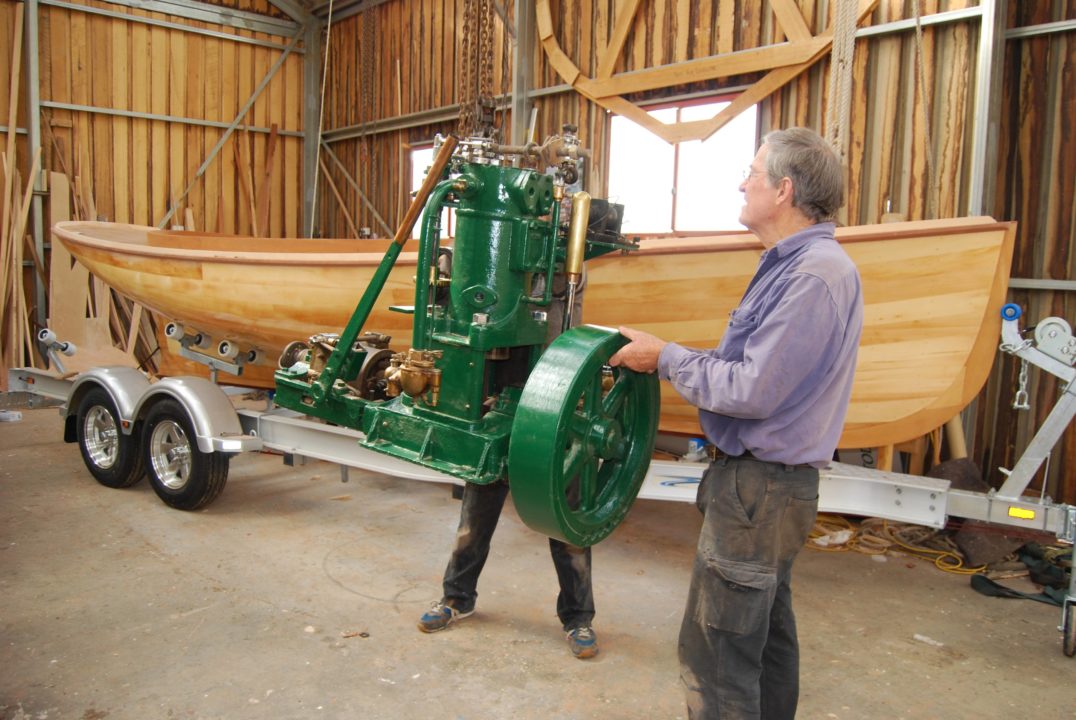 A Pretty Wooden Boat and a Most Interesting Engine.

This is the story of a much travelled wooden boat, with an even more travelled engine. Not only that, but the engine has a brother (or is it a sister?)

The Lady Frisco was built at Franklin, resides at Gosford, NSW, was launched at Lake Cargelligo (in central west NSW) and will be back in Tasmania for the 2017 Australian Wooden Boat Festival, along with its sister engine. There, the second engine will be stripped and rebuilt under the critical gaze of marine engineers and sidewalk superintendents, hopefully to be running again by the end of the Festival.

Dr. Andy Moran is a retired dentist with a love of timber, which developed as he who grew up on a forested property on the north coast of New South Wales. He spent some time in the Navy, but has now retired to Gosford, indulging in his joint loves of both vintage engines and wooden boats.

For the 2015 AWBF he carried his rare 1906 Frisco Standard engine to Tasmania, where it was on display and running at the Festival. But he returned to Tassie in July 2015 to build his Edwardian Gentlemens’ Launch. Through the winter and early summer he toiled at the Wooden Boat Centre at Franklin, using Tasmanian timber and helped by Tasmanian knowhow to create a masterpiece.

On 30th January this year at Franklin, he gently lowered the Frisco engine onto its bed in the boat. “How often do you see a 1906 engine going into a boat?” he quipped at the time.

Very soon after that she was on her way back to Gosford behind Andy’s Land Rover Defender. There in Gosford he finalised some essential work on the rudder, propeller shaft and propeller, as well as completing the canopy.

Andy’s wife Trish was born and grew up at the town of Lake Cargelligo in the central west of New South Wales. In early September with the launch date well set, the champagne was broken out, and Lady Frisco gently slid from her trailer into Lake Cargelligo.

Lady Frisco is now back at Gosford as Andy and Trish prepare her and her companion engine to return to Tasmania for the next Australian Wooden Boat Festival in February. There the team from the Hobart Vintage Machinery Society will build a temporary workshop, in which they will strip down the Frisco Standard and rebuild it over the 4 days, all under the publics’ critical gaze.

Lady Frisco is a carvel-built launch of about 25 feet, based on a design by Paul Gartside of Nova Scotia, Canada. Andy Moran used Western Red Cedar, Huon Pine and Oregon, and the hull is triple planked.

The Frisco Standard engine was a product of the Standard Gas Engine Company, of Oakland, San Francisco. The company commenced business before 1903. The engine is what is known as an open crank, vertical sideshaft design, sometimes known as a post engine, as the cylinder is supported by four stout posts. It has a unique and patented valve and governor mechanisms which is fascinating to see working, and early style igniter ignition.

Both the Lady Frisco, and the Frisco Standard engine rebuild will be part of the many attractions at next year’s Australian Wooden Boat Festival.