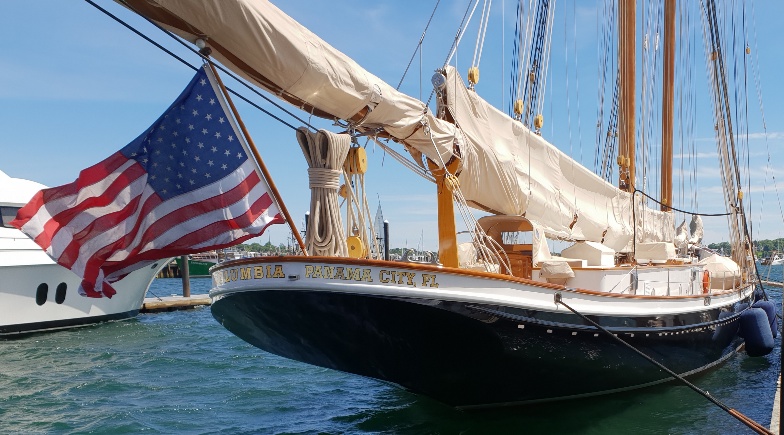 Our globe-trotting Dockmaster, Ross Barnett, and his lovely wife Cheryl, have just returned from a wide-ranging sweep across the USA, from the East Coast to the West.  We caught up with them for an account of their visit to some of the most important wooden boat locations in North America. 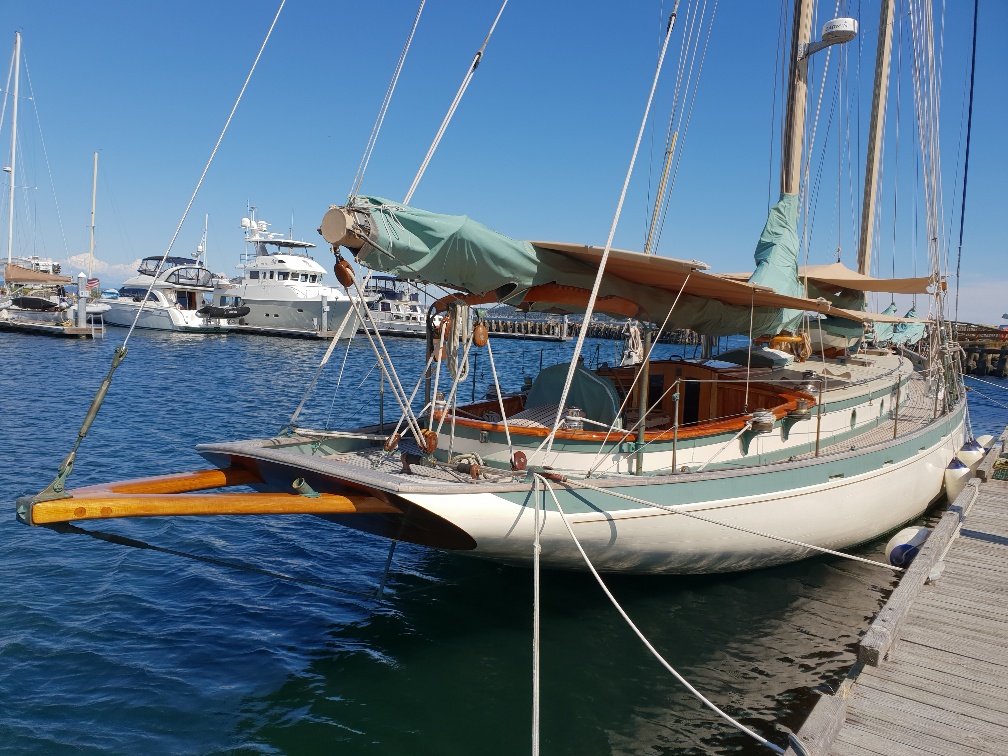 My wife and I have recently returned to Tasmania from a wooden boat “fact finding” voyage to the East and West coasts of the USA. 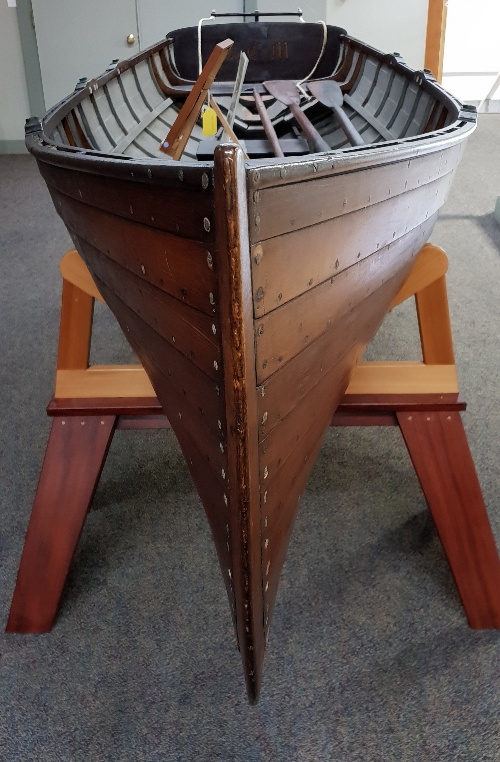 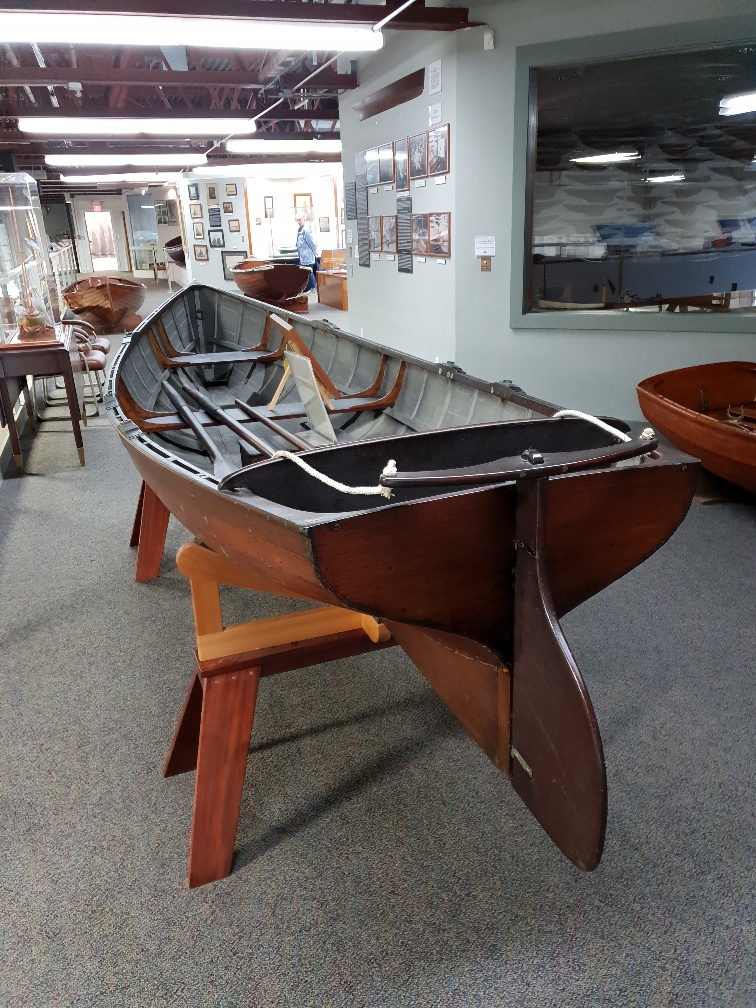 It was also very obvious that there are many, many more beautiful wooden boats over there in the USA, “I suppose it’s got something to do with the population” my astute wife suggested. Could be. We visited Newport, Rhode Island where there were more expensive boats than you could poke a stick at (not recommended in the litigious USA – Ed.) and the Newport Shipyard boasted a fairly substantial 500 tonne travel lift.  Although it was the beginning of the summer vacation we visited the IYRS (International Yacht Restoration School) and what a set up: you can learn just about everything to do with wooden boat building there.  A trip to the Herreshoff Marine Museum and America’s Cup Hall of Fame in Bristol was fantastic. Remember 1983? 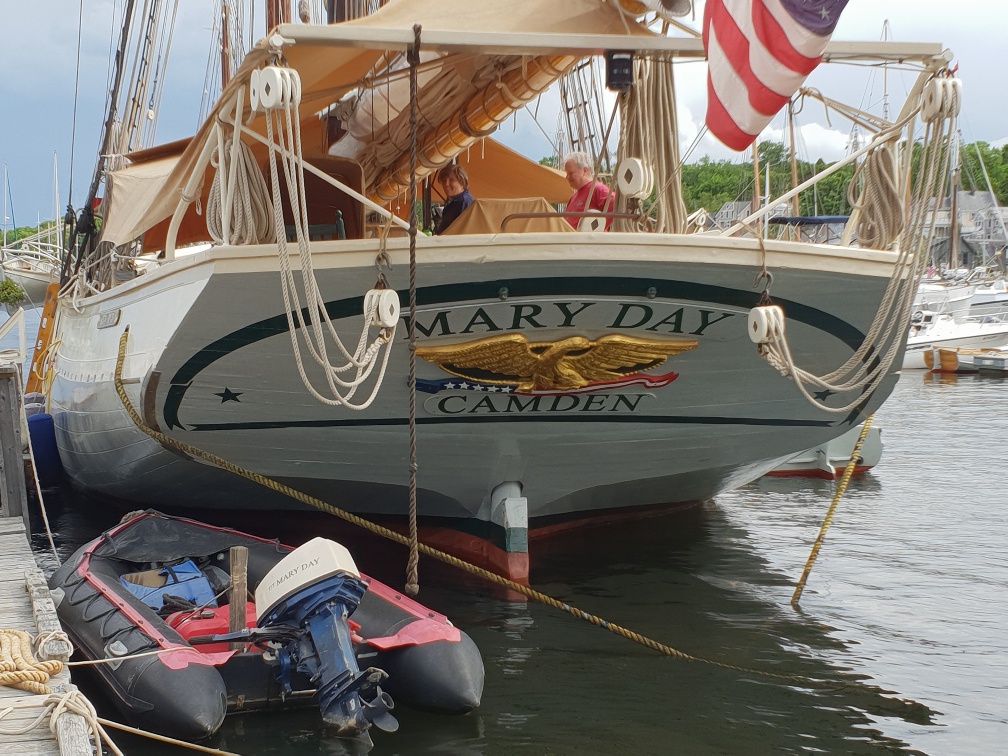 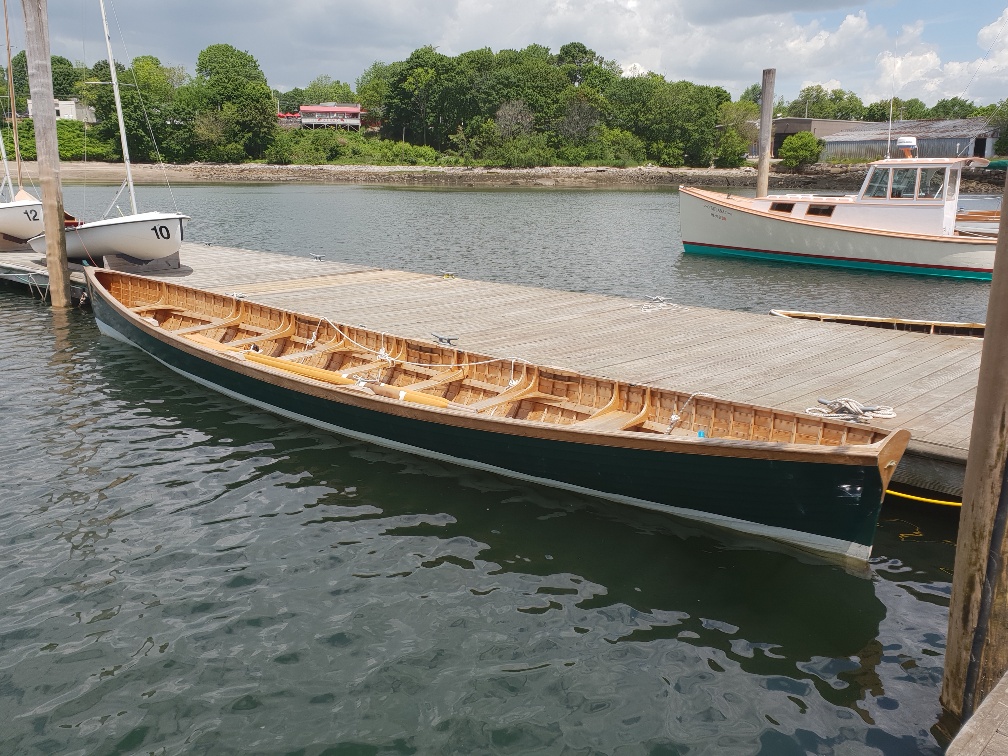 Onwards we travelled, Rockland, Rockport and Camden with plenty to see. Bums ‘n Bowsprits, plenty of charming charter Clippers. As well, we caught up with an old friend from the 2019 AWBF, SPIRIT, a 32 foot gig from the Apprenticeshop, Rockport. 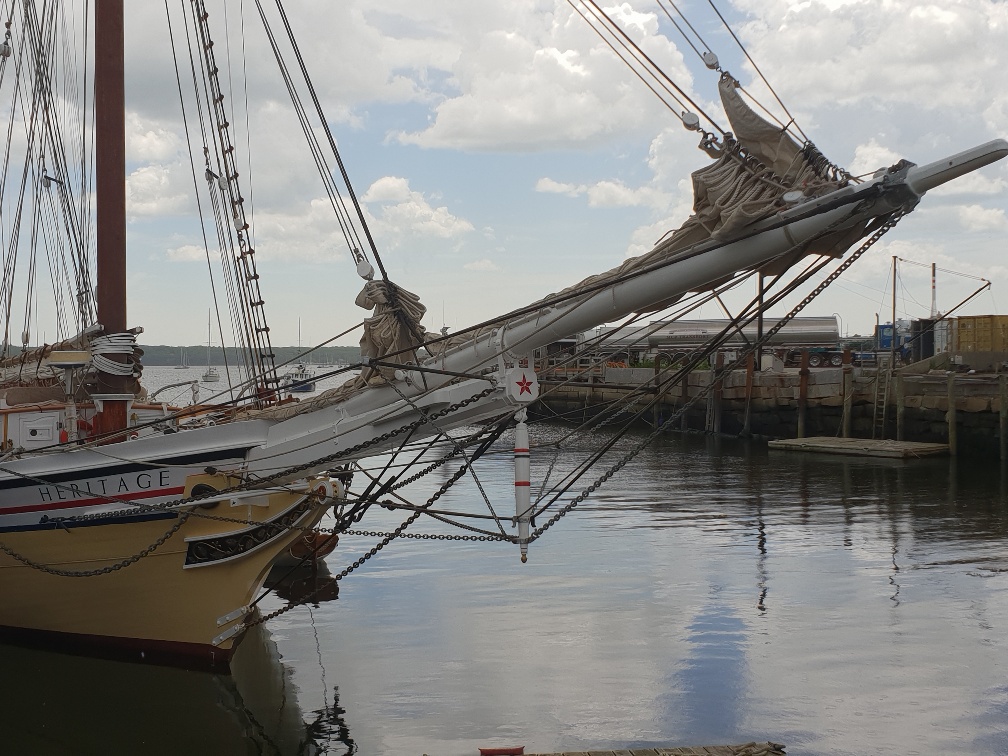 There were also vast quantities of of varnish. MrsB asked why ours wasn’t as good?  Well…I suggested she might like to help me next time I had the varnish brush out…silence was the stern reply! 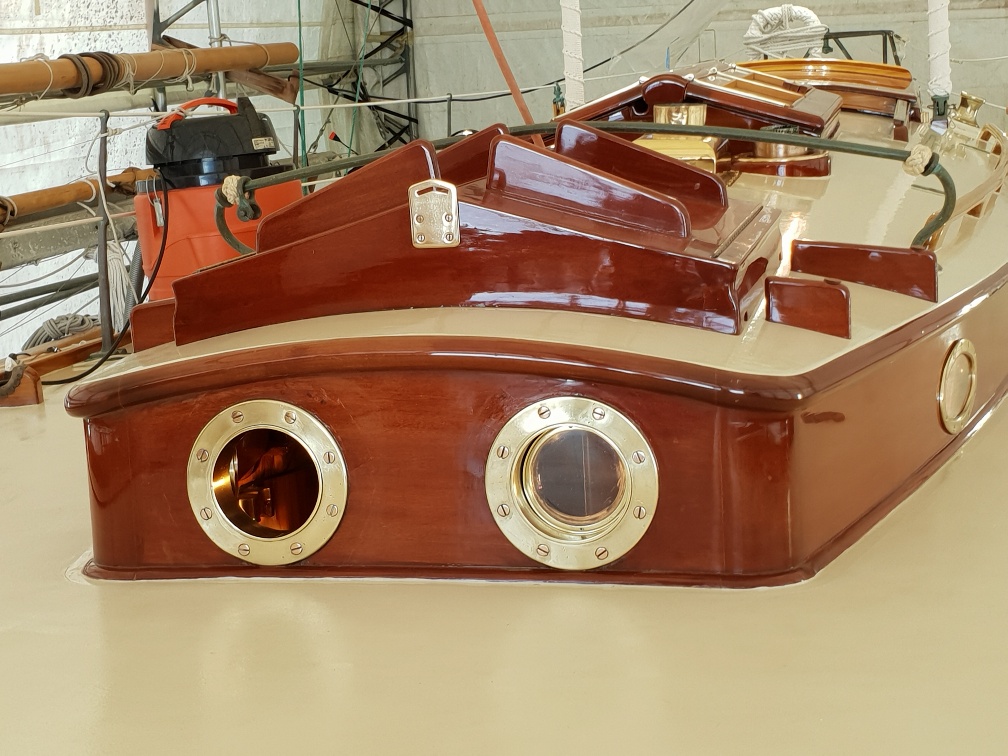 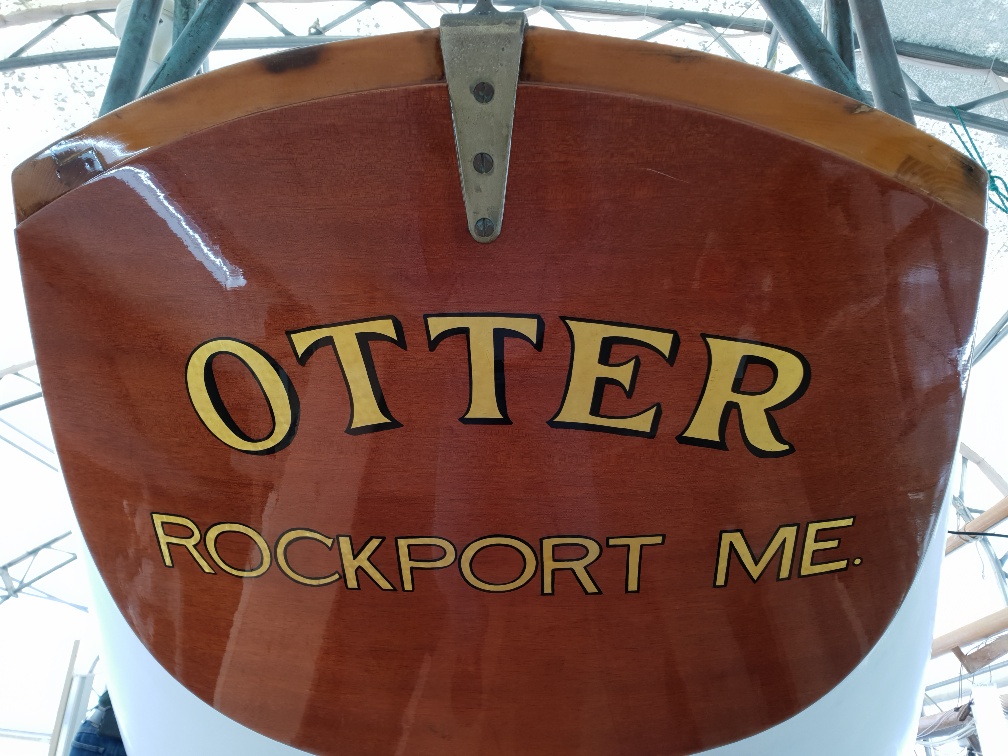 Rockport Marine was another boat yard full of surprises. Just by chance we met the owner of the yard, Taylor Allen.  As well as the shed being full of beautiful wooden boats, Taylor is soon to launch the WILLIAM UNDERWOOD a 70′ former Sardine carrier that has been a 15 year restoration project. Even MrsB thought she looked lovely. 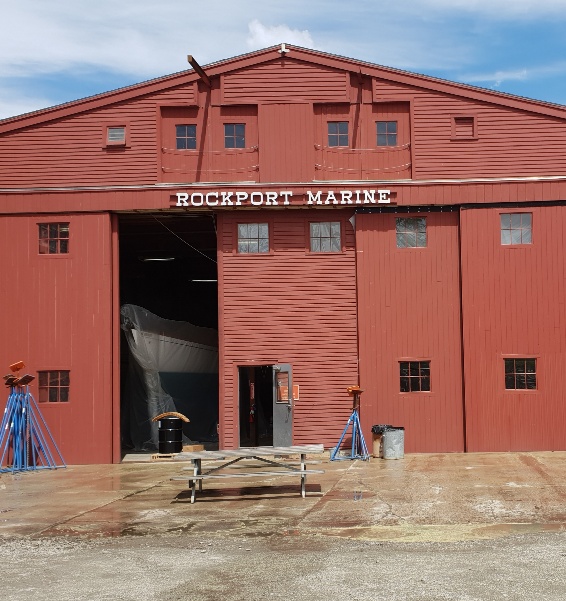 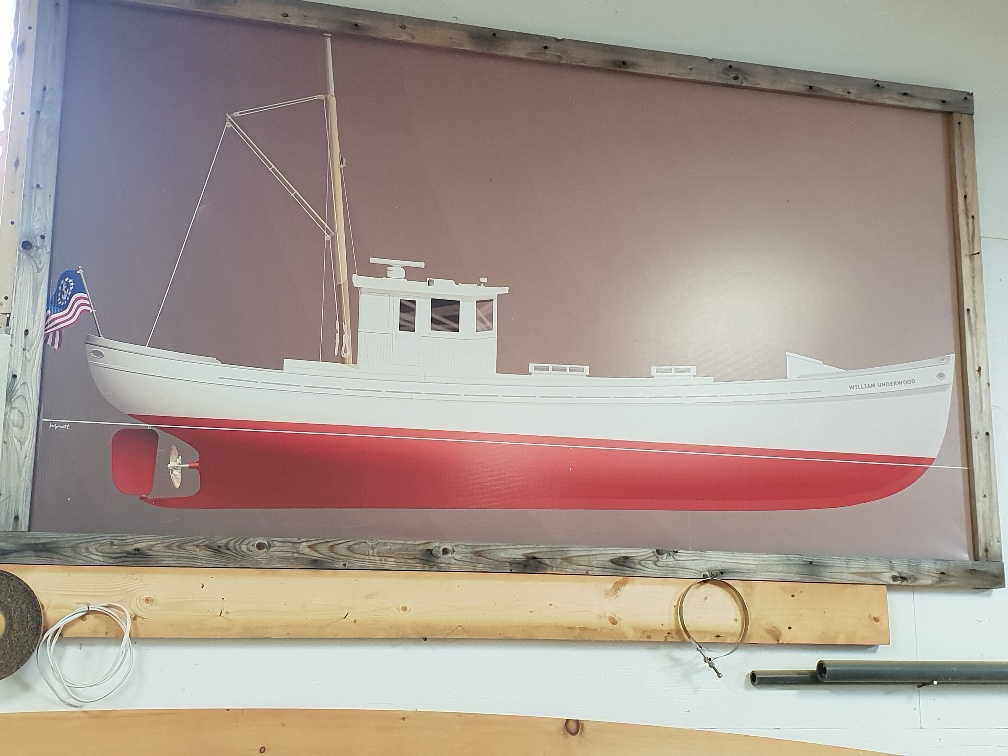 Next stop was Brooklin, Maine which most of us know is the home of that enlightening magazine, WoodenBoat and also Off Center Harbor, the producers of those wonderful short, entertaining wooden boat related videos. Steve Stone from OCH was our host and did a wonderful job of looking after us. We even managed to get out on the water and go for a boat ride…yes MrsB thought it was great fun…in a power boat, mind you…for ‘fivezies’ on Sellers Island, Naskeag Harbor. Brooklin also has an amazing boat yard, employing 60 staff and producing and maintaining some beautiful wooden boats. 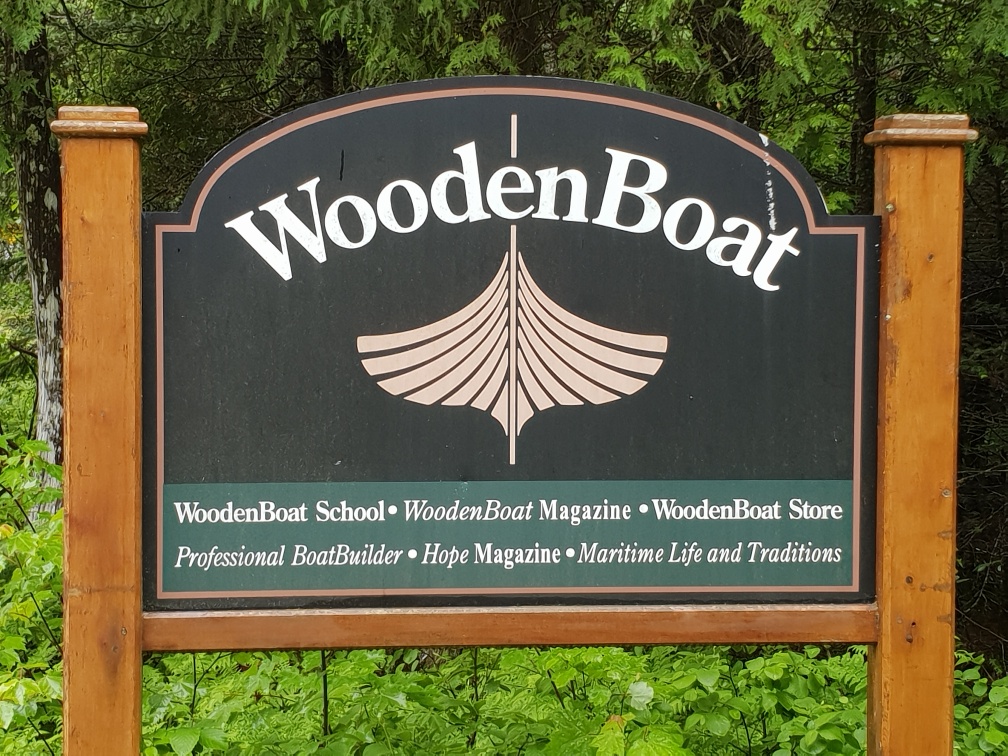 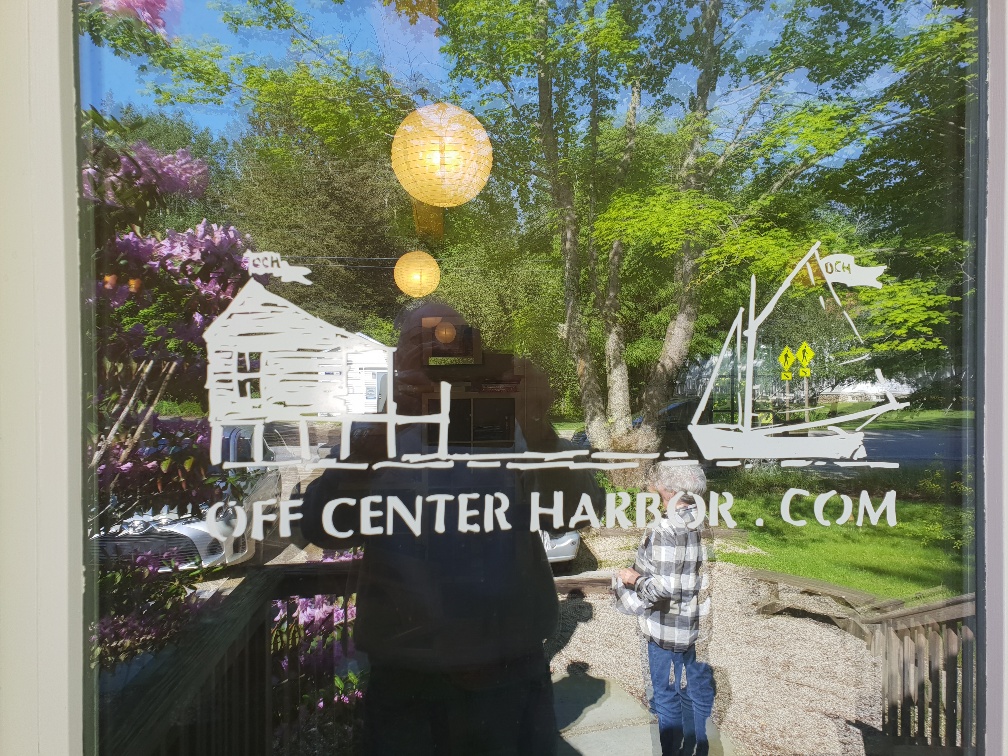 “Not more wooden boats” MrsB said.  I muttered some comment that they are all the most beautiful works of art and one can actually use the tax free wind and go sailing, you know, get from a to b without having to start the auxiliary.  “I see” was her guarded reply. 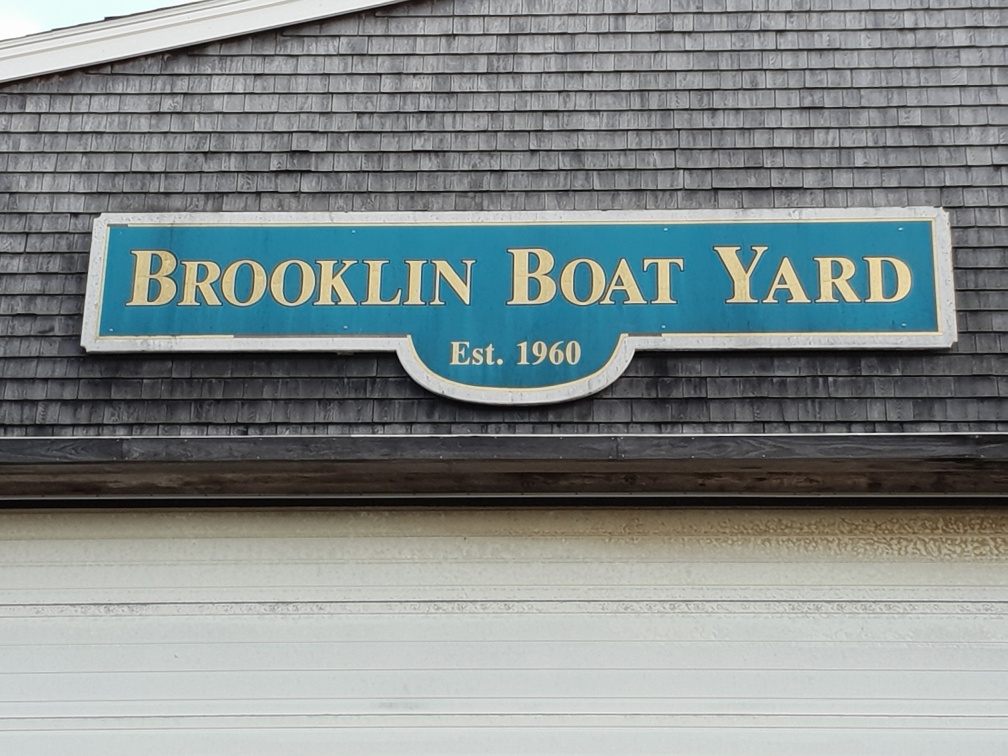 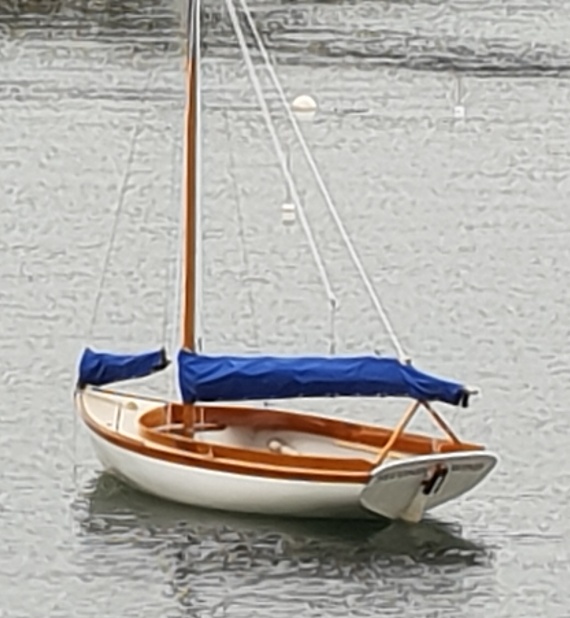 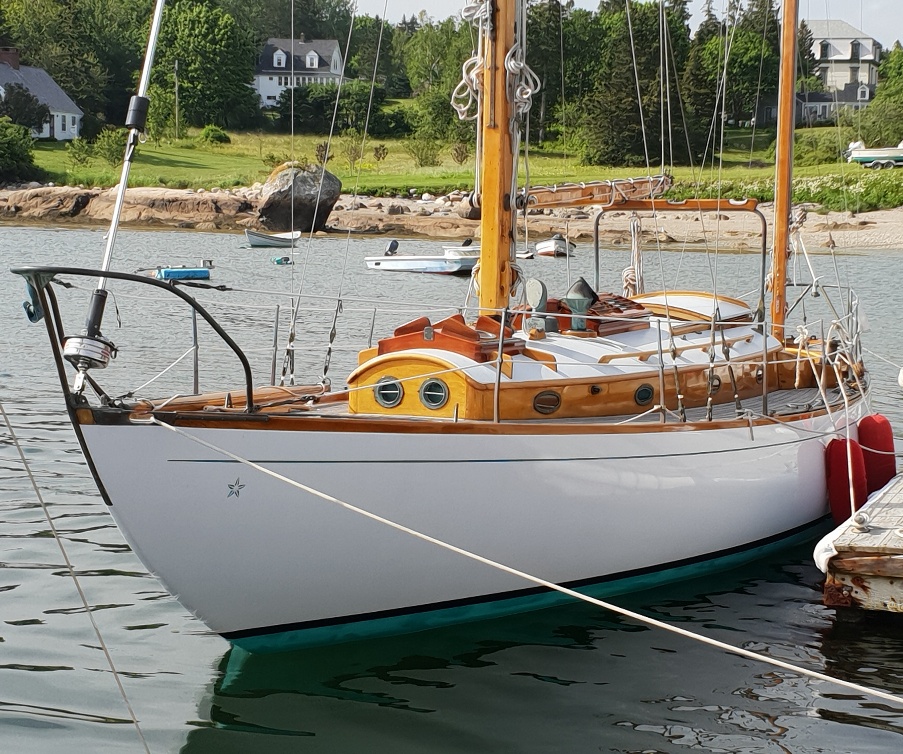 So next, the rather long voyage over to the Pacific North West, Port Townsend in Washington state.  If you remember, members of the North West Wooden Boat School attended our last festival, building that fantastic Haven 12 ½.  MrsB made comment that Port Townsend and the locals were very much like southern Tasmania…I couldn’t agree more. 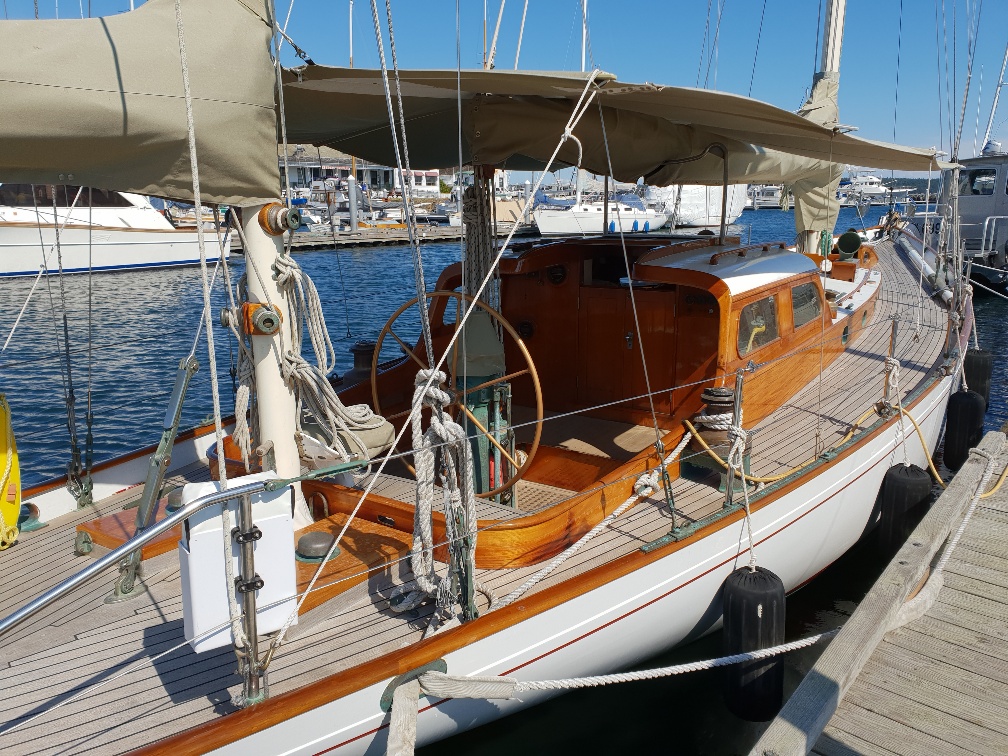 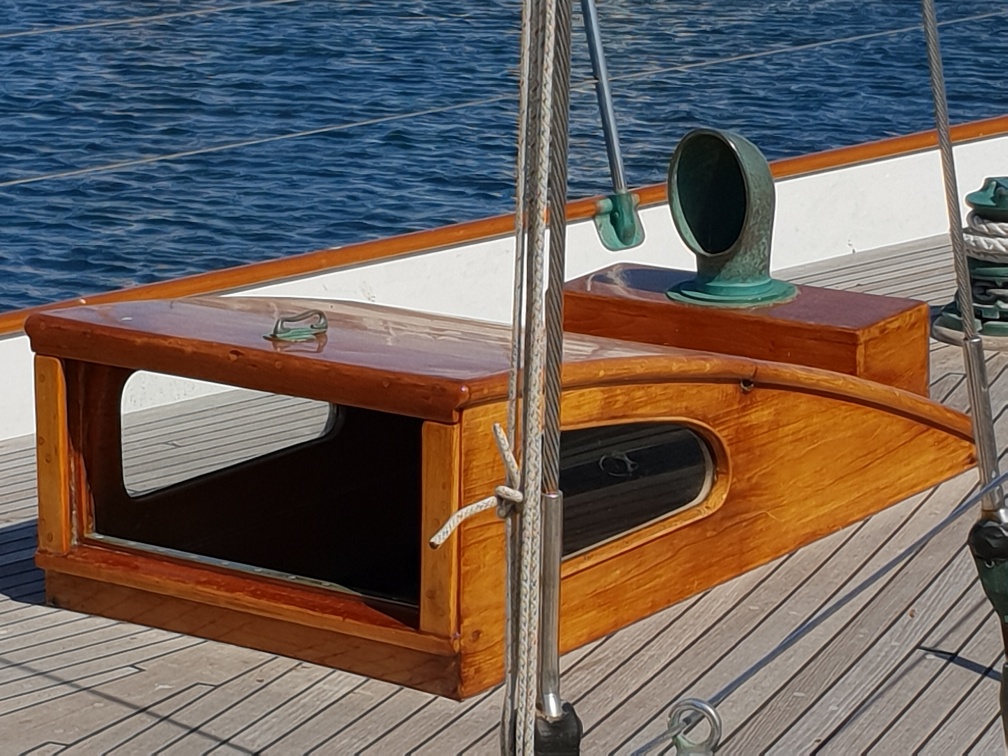 We were also fortunate to be shown everything in Port Townsend that we needed to see by Kaci Cronkhite, who, up until recently was the organiser of the Port Townsend Wooden Boat Festival and who has visited our festival on several occasions. MrsB was also seen onboard Kaci’s delightful Danish Spidsgatter, PAX, and I can highly recommend reading Kaci’s book…Finding Pax. 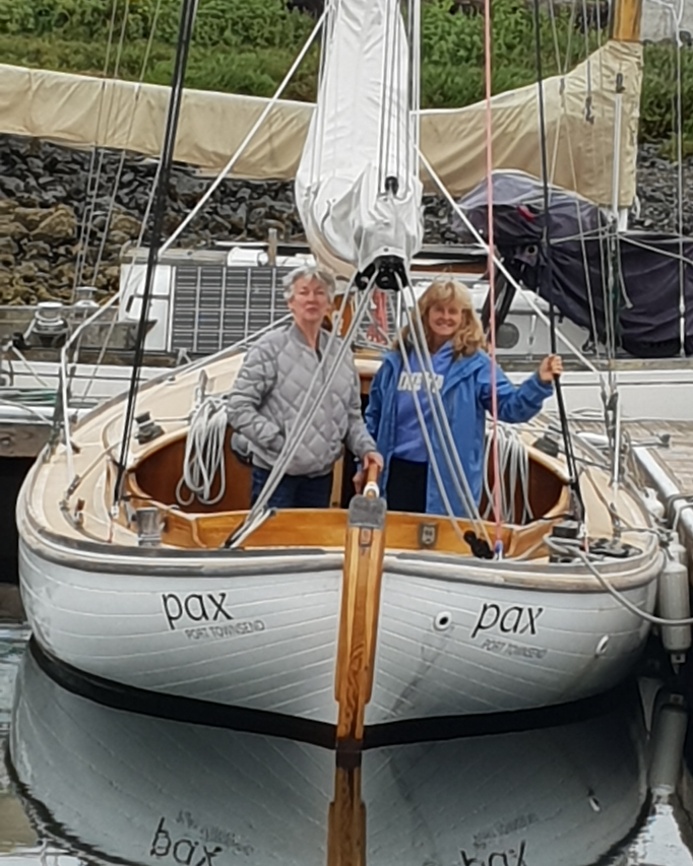 So, the facts are…there most certainly is a very large world-wide wooden boat family out there! 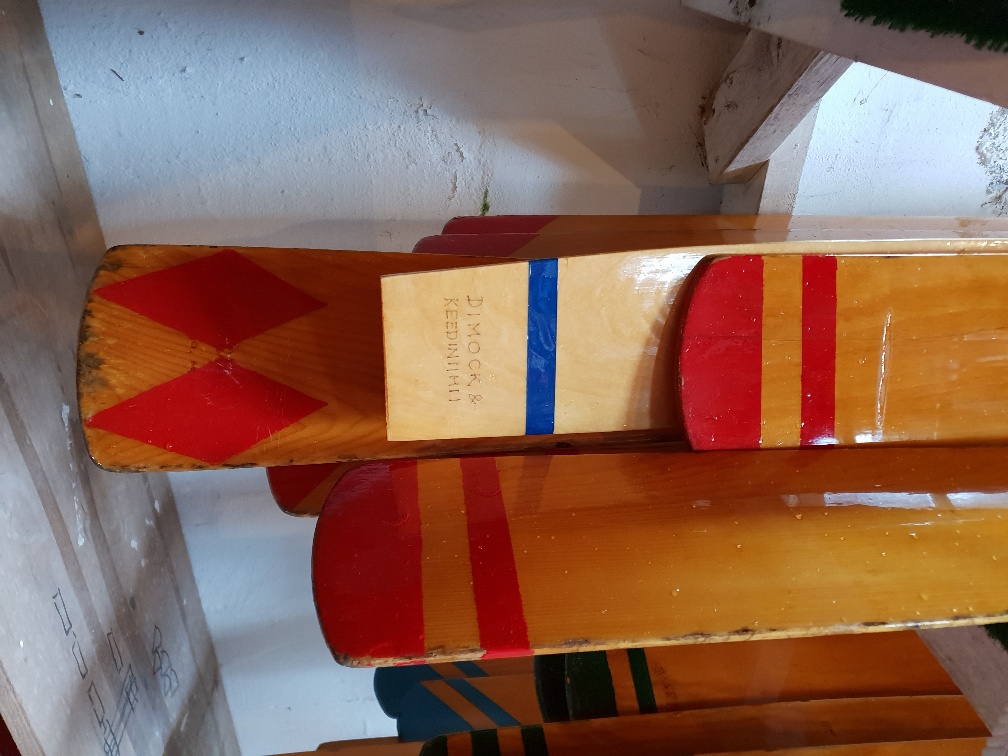