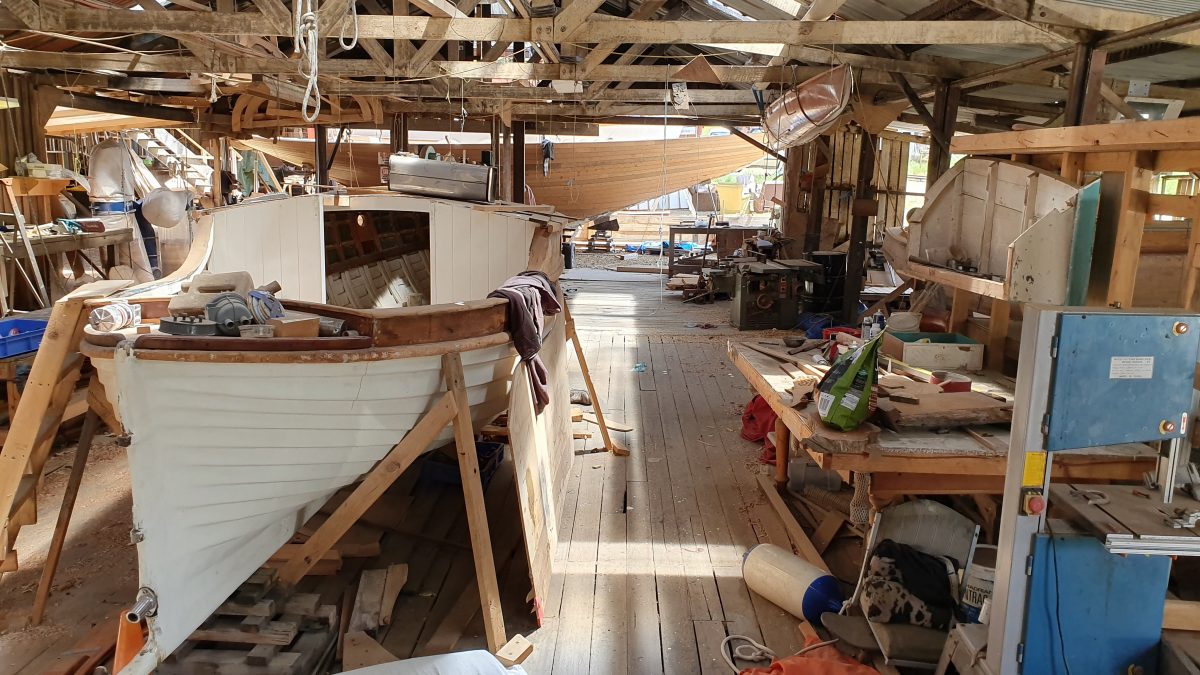 A couple weeks ago I had the privilege to visit a few of Southern Tasmania’s boat yards. The indefatigable Roscoe Barnett took myself and Festival Secretary Chris Palmer on a whirlwind tour through Port Huon, Gardner’s Bay, Cygnet, and Kettering to see some of the vessels that will feature in the 2021 Festival.

We started our journey at Dean Mark’s Boat Building out at Port Huon. The highlight here was Casilda, arguably the most authentic early Tasmanian fishing vessel remaining in Tasmania. She was built in Dunalley in 1915 by the Rattenbury brothers for the east coast crayfish and scalefish industries. After her fishing career she had a few mishaps, including a demasting in the 1983 Hobart Regatta, and a stranding in Port Davey during the late 80’s. Now the old girl is in owned by author and historian Graeme Broxam, who is passionate about preserving her in as close to an original state as possible. Dean Marks is currently in the process of replacing some of the decking.

Next up, we headed across the Huon River to Wilson’s Boat Yard, keen to talk to Phillip Myer and Terry Lean about the progress on Neilma G., featured in last week’s article: TasMAINEian Lobster Boat. Over the last century and a half, Wilson’s Boat Yard has operated in various locations along the shores of Port Cygnet, and finally the business established a shed in Gardners Bay, where it currently operates. We’ll be posting more updates on the progress of Neilma G. and other projects at the Wilson’s Boat Yard next year.

Back into Roscoe’s ute and across to Port Cygnet where we were greeted by Jeremy Clowes at Cygnet Wooden Boats. Planks of wood, old tools, and crowds of wooden boats of all shapes and sizes, the workshop is straight out of a Scandinavian fairy tale. Jeremy took us through the history and technical details of his restoration of Te Uira, a New Zealand built racing yacht built in the late 1800’s. When we arrived, Jeremy and his team had been meticulously replacing the kauri planking in places. Where did they find kauri this side of the Tasman sea? A fortuitous haul from an auction at Lymington of course! There’ll be more updates, information and stories on the Te Uira restoration throughout 2020, so stay tuned.

Among the various projects unfolding at Cygnet Wooden Boats, was John Brown’s ongoing showdown with the famous D-Class Nymph. Previous owners had done a few nasty modifications, which John is now painstakingly undoing, hero that he is. We hope to see Nymph return to her former glory and maybe even take the prize at the Derwent Class World Championships at the 2021 Festival.

Finally, we weave our way up to Kettering, stopping at Denman Marine to stand at the keel of Te Rapunga. Don’t be fooled by the Maori name…this vessel was built in Germany and bought by George Dibbern in early 1930. And he set sail soon after. With no auxiliary power, radio, or main sail, George led a small crew to New Zealand, where he had spent some time as a youngster. During the long and circuitous journey from Europe to the Antipodes, George refused to associate himself with the burgeoning Nazi movement in his homeland, opting instead to fly a flag of his own design, and creating his own passport, stating he was a man without a country and a friend of all peoples.

During his Pacific wanderings on this 32-foot ketch, the enthusiastic philosopher-sailor befriended artists, writers, sportsmen and environmentalists from all over the world. After winning the second Trans-Tasman race against NZ yacht Ngataki, the two boats raced again from Melbourne to Hobart. Once more, Te Rapunga was the victor. Years later George settled in Australia, purchasing Satellite and Partridge Islands— securing his links to Tasmania.

More stories, information and photographs about the re-discovery of Te Rapunga and the restoration process will be shared by the company Bruny Island all throughout next year. So keep your eye out for that, as well as updates on all of these other exciting projects.