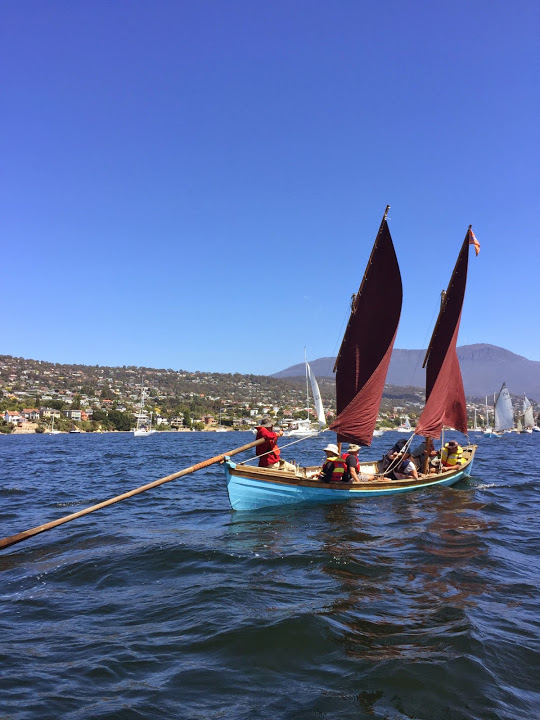 The village of Franklin, a short distance south of Hobart on the Huon River, is a growing centre of wooden boat enthusiasm, with the Wooden Boat Centre, the Franklin Working Waterfront and the Living Boat Trust all doing their bit to enliven the scene.  Martin Riddle writes about one aspect of this enthusiasm – the now-famous ‘Tawe Nunnugah’.

What better way to arrive at the 2017 Australian Wooden Boat Festival than sailing or rowing a small craft from the edge of Tasmania’s southwest wilderness up the D’Entrecasteaux Channel to arrive ten days later in time to join the sail-past at the start of the festival?

Every two years since 2007 the Living Boat Trust (LBT) in Franklin has organised an open boat camping expedition or ‘Raid’ to enable small craft to be used to their full potential safely and in company with others. The expeditions, called tawe nunnugah meaning ‘going’ by ‘canoe’ in the local Aboriginal language, takes participants through some of Tasmania’s most spectacular scenery. From Recherche Bay in the wild south along the beautiful coastline of Bruny Island, across the mouth of the Huon River before entering the Derwent River to Hobart.

The Tawe Nunnugah ‘raid’ gets underway at Cockle Creek in Recherche Bay, the southernmost road access point in Australia.

Registration for the tawe nunnugah 2017 Raid is now open. Follow the links at: http://lbt.rforster.org/tn17

The fleet consists of both small sailing and rowing boats supported by larger vessels and fast safety boats. Sailing craft must be seaworthy and capable – slow and steady is more suitable than a sprightly, thoroughbred day-racer. The ability to reef sails quickly is essential for when the inevitable squall comes through. Rowing boats range from a 6-oar whale boat, several 4-oar St Ayles Skiffs to single-person expedition skiffs. If you can’t bring your own boat we can accommodate you on the Living Boat Trust’s own vessels.

The Raid is fully catered with land-based support including a truck, so camping gear is not cluttering the small boats. Participants need only bring their tent and bedding as all shared camp facilities are provided, including marquee, seats, trestles, mobile kitchen and Portaloos. All meals are included in the price and are prepared by the dedicated cooking team. Participants are expected to muck in around the camp, helping with general camp tasks such as loading and unloading gear, setting up the marquee and washing-up.

Along the way we stay at a range of camp sites, many of which are on private land and are not otherwise accessible. The map in Fig 1 indicates the general route of TN17 although specific sites have yet to be fixed.

Participating in the Raid gives a whole different perspective to the Australian Wooden Boat Festival. Participants get to experience what these boats were built for and what they are capable of. The vessels that have done the Raid arrive tired and perhaps a little worn around the edges but have earned a dignity and respect never achieved by a highly varnished boat arriving on a trailer. The journey of transition from the edge of the Tasmanian wilderness to the hustle and bustle of the boat festival brings Raid participants back year after year. For many it is the highlight of their boating calendar and for some gives a real purpose for their boat ownership.

The 2017 Raid is from Wednesday 1 February to Friday 10 February. Costs are $120 per overnight per person or $1080 for 9 overnights. People arriving on Tuesday 31 January can camp near the Living Boat Trust in Franklin. Transport will be arranged to take people from Franklin to Recherche Bay the following day. Over the years interest in the Raid has grown considerably and for TN17 we have to limit numbers to ensure it is safe and manageable – so getting in early is recommended.

The St Ayles Skiff movement has spread rapidly. ‘Wee Tawera’ is a guest from New Zealand

After the TN17 Raid and the Australian Wooden Boat Festival (AWBF), the Living Boat Trust will organise a very informal ‘Return Raid’ – this is a self-catered, sail/row in company from Hobart back to Franklin, leaving Monday 13 February and arriving in Franklin on Wednesday or Thursday (to be decided). This will be at a lower cost, however, numbers for the Return Raid will be limited and preference will be for people and boats that have done the full TN17. The Return Raid is timed to get people and boats back to Franklin in time to participate in the Tasmanian St Ayles Skiff Regatta/rowing championships on 18-19 February.