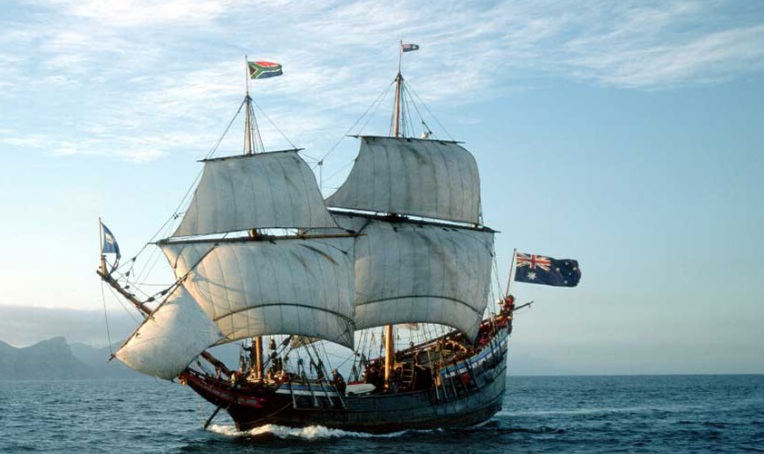 The story of the early Dutch explorers and their ships, soon to be a major theme of the 2017 Australian Wooden Boat Festival, gets started this summer in Western Australia. In the early 17th century, the powerful Dutch company VOC (we know it in English as the Dutch East India Company) sent wooden ships and brave navigators thousands of nautical miles into unknown waters. They were searching for new trading partners and a shorter route to the rich Spice Islands of Indonesia. Why the rush? Because spices like ginger, cloves, pepper and cinnamon were immensely popular in Renaissance Europe and the appetite for these expensive luxuries knew no limits. A ship’s captain who could sail these vast distances might return with a cargo literally worth more than its weight in gold. It’s worth remembering that this was before reliable clocks (for determining latitude), before the invention of the sextant and long before the Southern Ocean was mapped. Dutch sailors were further from port than modern day astronauts going to Mars, and there was no Houston Control to call home. It would still a challenge today to sail 9,000 miles out of sight of land and hope to find landfall safely.

It’s no wonder, then, that the coast of Western Australia is strewn with the wrecks of hundreds of ships that came upon the Australian continent with little warning, in the dark of night, with strong winds and seas behind them. They simply didn’t know it was there. They were wrecked on scores of isolated reefs and shoals, most of them to disappear forever. In 1606, one of them, Willem Janszoon, managed to reach the shore of Cape York. In 1616, Dirk Hartog made landfall in his ship, the Eendracht, at Shark Bay, Western Australia.

The Lioness and the Dove

The original Leeuwin (Dutch for ‘Lioness’) was a Dutch galleon that discovered and mapped the southwest corner of Australia in March 1622, just 6 years after Dirk Hartog’s landing at Shark Bay. While the charts survived in the records of the VOC, the logbook has been lost. We don’t even know the name of the captain who sailed her.

STS Leeuwin II is Western Australia’s own tall ship, a 3-masted barquentine with over 810 square metres of sail and an overall length of 55 metres. The STS Leeuwin II is a working ship and all voyage participants are expected to be involved in sailing, steering and navigating, cleaning the ship and climbing the mast. The Leeuwin will sail from Freemantle to Denham in October 2106. Details can be found here: http://www.sailleeuwin.com/dirkhartog2016

The Duyfken (Little Dove) was a lightly armed, fast and nimble Dutch ship despatched from Banda, Indonesia to explore New Guinea. Commanded by captain Willem Janszoon, the ship was the first to discover the Australian mainland, when it touched in on the western shore of the Cape York Peninsula, near what is now the town of Weipa. The Dutch name for this type of fast, shallow draft vessel was jacht, from which we get the modern name for a pleasure boat.

The modern replica vessel was built by community effort in 1999, to counter two of Australia’s most popular maritime myths: that Dirk Hartog was the first European to step ashore on the Australian mainland, and that Captain Cook ‘discovered’ Australia. In truth, it was Willem Janszoon in the ship Duyfken who claimed that honour. In 2016, the modern Duyfken will sail from Bunbury, WA, calling at Mandurah, Fremantle, Jurien Bay, Dongara, Geraldton, Cape Inscription and Denham. Members of the public can sail in her or simply visit the ship between late August and late October 2016. Details of the voyage are here: http://www.sailleeuwin.com/dirkhartog2016