Steam Men Don’t Give Up…

Sailing For a Good Cause 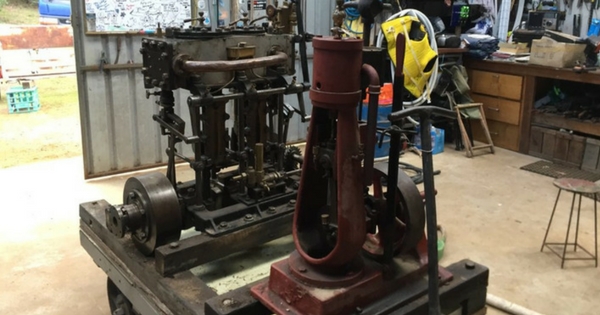 If so, we have her steam engine.

The Papua dates back to her construction in the early 1880s in Melbourne, apparently intended to head north to Papua, but came to Tasmania instead, around 1885. Here she was owned by Signor Bernacchi, of Maria island fame and then was sold to work as a craft carrying men and material from Hobart to Bellerive for the construction of the Bellerive-Sorell railway.  At this time the Railway Workshops in Launceston built a steam engine to repower her, the earlier steam engine proving unreliable.

Papua, later renamed Roma then became a steam yacht under private ownership, and at some point the steam engine was replaced by an early model Gardner diesel.

Papua, or Roma has disappeared. She was last seen in Huon waterways some twenty years ago.  As one of Australia’s more historic craft, many people would dearly love to know her whereabouts, or her fate. Meanwhile, courtesy of the Tasmanian Transport Museum Society (TTMS), we had her Launceston built engine on display at the 2017 Wooden Boat Festival, powered by piped steam from the TTMS’ own Robey steam engine.

Alongside the Papua’s engine was a neat little steam engine, an American built O and S, in steam and at work as well. This picture shows them under preparation in the workshop in advance of the festival.

Thanks to Rob Oates, Graeme Broxam, and Mick and Yvonne Williams for the photographs.

(Ted is the Vintage Machinery Coordinator for the MyState Australian Wooden Boat Festival.  His knowledge of heritage machinery and his network of friends and colleagues has made the vintage machinery exhibit at the festival one of the highlights of the event.  From heirloom outboards to triple expansion behemoths, these fascinating machines draw a big audience every time.)