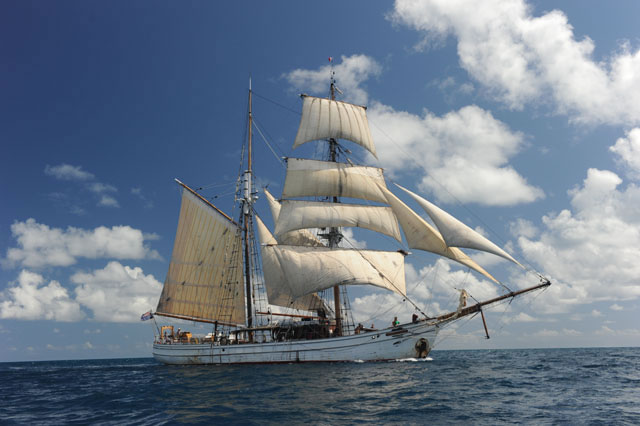 We haven’t seen the 1949 brigantine Soren Larsen here in Hobart since the Tall Ships Festival back in 2013, but there are some hopeful signs that this star of a ship (literally – she was captured on film in The French Lieutenant’s Woman, The Onedin Line and Shackleton) will be with us again. Soren Larsen was one of the original Jubilee Sailing Trust vessels and of course the JST has since sent Lord Nelson and Tenacious to Hobart for the AWBF.

The ship was built in Denmark just after the Second World War and was the last ship built by the Larsen Shipyard. She was a true working vessel, carrying general cargo in the Baltic for more than 20 years, until she was gutted by fire in 1972. Re-decked and re-fitted in 1979, she reached Australia permanently in 2011 and is now part of the Sydney Harbour Tall Ships fleet. 140 feet in length and 100’ tall, she is a magnificent example of a late-era wooden sailing ship