Sawdust and Nappies by Sarah Thornton

TasPorts in the Spotlight

This charming story and these wonderful pictures came to us in the process of registering The Dinghy, a 12-foot Fazackerley design, for Boats Ashore in the MyState Bank Australian Wooden Boat Festival 2019.  Author Sarah Thornton kindly allowed us to edit it for newsletter length as well as providing the heirloom family photographs to illustrate it. 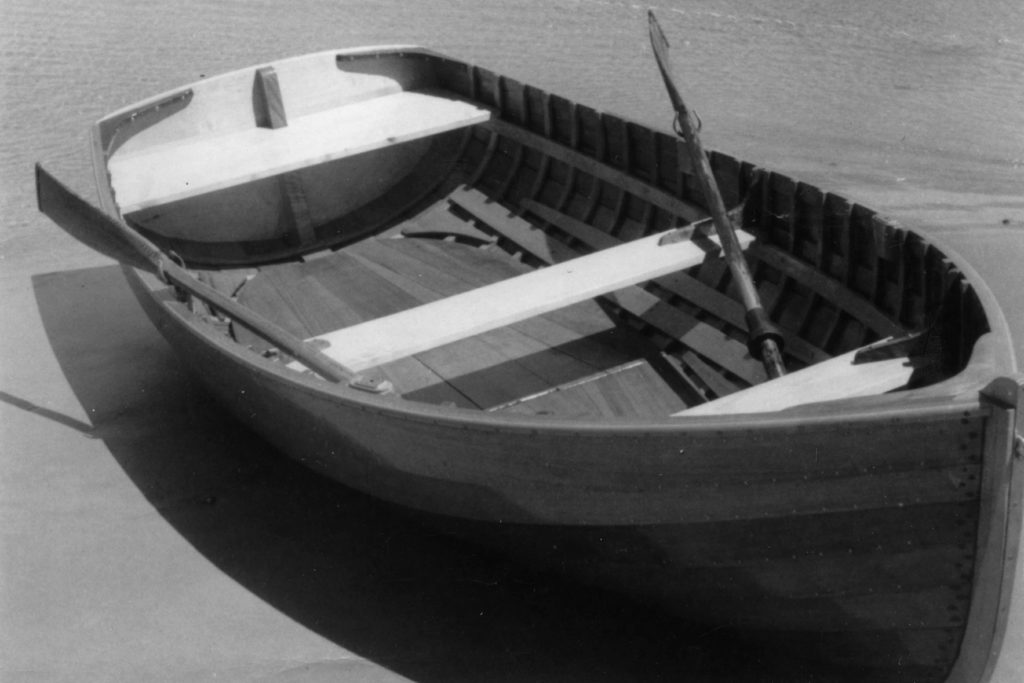 ‘The Dinghy’ was built in 1967, largely of King Billy Pine and is a living example of the passion for and the longstanding community of excellence around boat building in the south east of Tasmania. Still in use as a family fishing boat, The Dinghy was built as a project by Bruce Miller, with the support and guidance of master boat builder, Reg Fazackerley. I believe this twelve foot clinker is the only Fazackerley-designed dinghy to be built inside a family home.

My father Bruce, who passed away in 2014, was an electrical engineer with the Hydro Electric Commission who, much to his wife Julie’s dismay, decided to build the boat in the sunroom of the family home. With two children still in nappies and two not yet started school, navigating the wood shavings, saw dust and array of tools and timber (not to mention the construction frame itself) was the sacrifice Bruce and Julie were prepared to make in the pursuit of Bruce’s dream. The sacrifice paid off as three generations have enjoyed The Dinghy’s beautiful lines, stunning timber grains and seaworthiness.

In 1967, as a twenty-eight year old engineer, Bruce began looking at the various designs. He was very taken by Reg Fazackerley’s craft – the beautiful flare in the bow, the lovely curve of Tumblehome in the stern. Being none too shy, Bruce visited Reg’s home in Sandy Bay after work to ask him whether he would provide instructions on how to build a dinghy to one of his designs.

Reg advised that unfortunately he could not assist but he happily showed Bruce through his workshop out the back. Bruce remembered entering the shed by passing through a doorway shaped like a ship’s bulkhead and then stepping into a wonderland: “over the entrance into all these masses of Huon Pine and King Billy wood shavings all over the floor… crikey the smell was magnificent!”

Reg assumed Bruce wanted to build a plywood boat. He was surprised when Bruce assured him that, no, he most certainly would be building a clinker dinghy, now more convinced than ever.

And in the spirit of this community — lovers of beautifully designed and crafted boats — the master boat builder took this young, somewhat naïve but determined engineer under his wing. He told Bruce to come back and see him once he’d settled on the dimensions he wanted and the proposed uses (possibly thinking he’d never see him again!). Bruce turned up within a week to tell Reg he wanted the boat primarily for fishing and that he’d “decided on a 12 footer with a decent beam” That was all Reg needed and he invited Bruce back later that week — he’d have something for him.

“So, I went back after work on Friday and here was this lovely little half model! One inch to the foot, so twelve inches long and layered — as you know they are, so that you can separate the layers, get the measurements and with dividers set it out and get the stations, dimensions and such, and run a curve.”

Bruce went home and built a jig with a hardwood beam along the bottom, another at the top and vertical posts at each end and proceeded to set it up in the sunroom, nailed to the superb, five year old Tasmanian Oak floor! 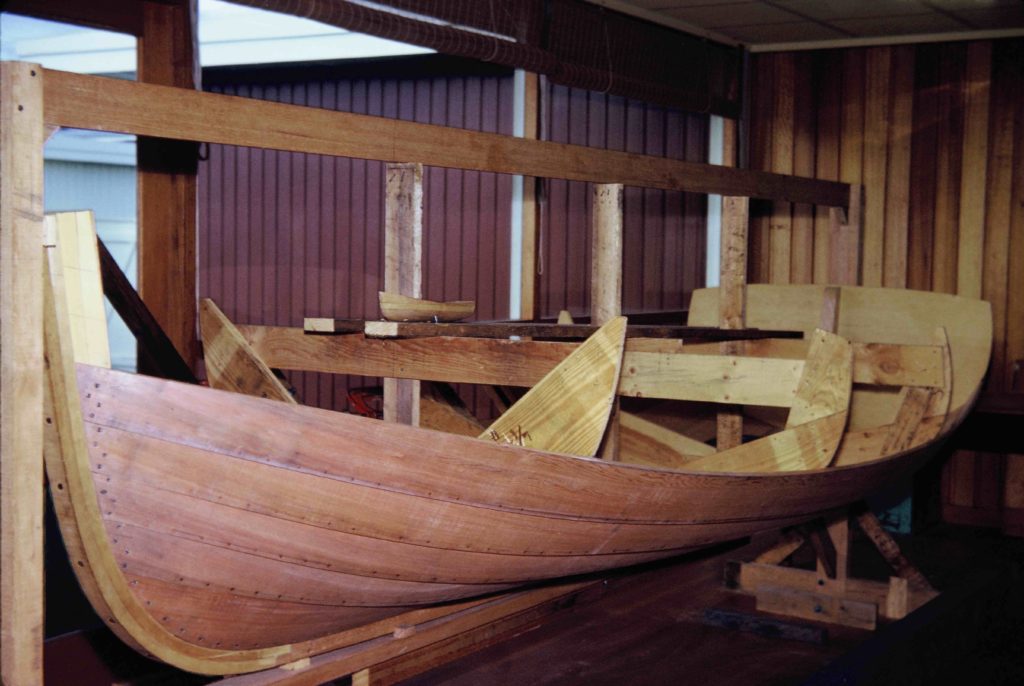 Bruce’s wife Julie remembers having four kids under six years old at the time: “My memories were of plenty of wood shavings on the sunroom floor as I negotiated a bassinet with baby Roger from bedrooms to kitchen, nails being hammered, steam box steaming… happy days!”

Bruce describes the process from there as instructed by the master:

“So the next thing was, he said, Get some old packing case material, join it all together, nail it together, put your offsets on it, cut them out with a jig saw or something. He used to use a keyhole saw. He hardly used any power tools — did everything pretty much by hand.

“So I did all of that, and I set up the stations then I asked, What do I do next? He said, Well get your planks, they’ve got to go in first, start with the garboard strake which is the one next to the keel and work your way up, one plank each side, one at a time and you’ll end up with a true shape that won’t be warped with too much stress on one side and not enough on the other to counterbalance.

“So I said, What sort of materials do I need? He directed me to go a certain timber merchant in Argyle Street:  He’s a friend of mine, I’ll tell him you’re coming and he will have all the materials on hand that you’ll need.

“So I went there and introduced myself. And sure enough he had all the planks. King Billy. I wanted to build it in King Billy which Reg told me was very good to handle, not as brittle as Huon Pine, easier to bend and if you bash it on rocks it would splinter but it wouldn’t fracture, and the boat would be lighter for handling.

“So they’re all King Billy planks, half an inch thick, and over twelve foot long and about seven inches wide (Reg used to build his dinghies from seven inch planks). So I had all the materials and away I went. I built an electric steamer made of galvanised steel with a deep section at one end.”

Bruce got to work on the planks, starting with a garboard strake. Reg had recommended the use of wooden clamps with pegs to jam them tight (wood recommended over steel to avoid bruising the timber). Quite a few clamps were needed. Bruce made every clamp by hand. He kept working away, shaping one plank at a time each side, locking each in place using only the clamps and removing them each time as he moved up each side of the boat.

Reg explained how to join everything together with copper nails, rove the top couple of planks, the bottom ones, the ribs and then all the knees. Reg used ‘grown knees’ from the bush, lovely angled branches. Bruce went searching in the bush behind Howrah and found just the right shapes.

Reg wanted Bruce to have a decent ‘grown’ breasthook so he gave Bruce a piece of wattle root in an elegant elbow shape. Bruce cut it with a band saw and made one breasthook out of the lovely piece and installed it snugly into the bow. 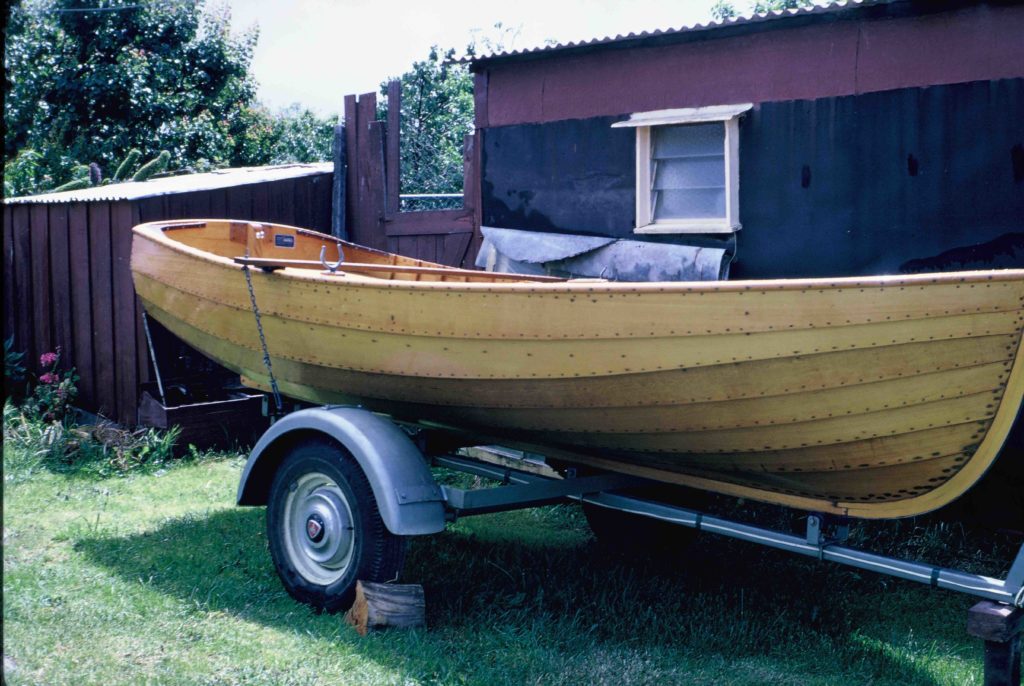 The boat was finally complete. Bruce had to remove the double doors from the side of the house to get it out into the yard. He carefully hoisted it onto the trailer and drove down to Sandy Bay to show Reg, full of trepidation as to whether it would pass muster. The keen-eyed master boat builder walked around it slowly, examining the shape, running his fingers over the joins, inspecting the fittings… every inch, Bruce sweating the whole time. In fact, after ten minutes of scrutiny, Bruce was certain, “He doesn’t like it, I’ve done something wrong, it’s terrible… he’ll say, I better put the axe through it.”

Finally Reg straightened up, looked the young man in the eye and said, “That dinghy is worth 12 pound a foot of anybody’s money.”

Bruce was jubilant. A man with a keen eye for prices, he knew this was exactly the amount Reg charged for his own workmanship. He was grinning like a Cheshire cat, but most of all, hugely relieved.

Fitted with a 4 horse Johnson and a pair of cut down racing scull oars The Dinghy became a much-loved fishing vessel. Every Spring Bruce would put The Dinghy on the front lawn and hook up the hose with a trickle of water, bungs in, to let it “take up”. It would be days before it held water, leaking through the gaps in the cold, shrunken planks, then timbers gradually swelling, breathing, coming to life again.

Recalled by the youngest of Bruce’s sons, Colin:

“When I was very little I soon got bored of fishing and instead liked to simply sit in the bow or centre thwart watching Mum, Dad, or one of my older siblings haul in and land the ‘flatties’ flapping and bouncing on the deck, the more exuberant ones shimmying down between the bottom boards and the hull, or sloshing about in the stern.  I have very fond memories of sitting in the bow with the wind in my hair watching the water rush past with the white 4 horse Johnson outboard (and later redline 6 horse Mercury) propelling us to the ‘spot’. Under oar power – and sometimes I’d get to have a turn – was a different, more peaceful experience, with the gentle waves lapping around the hull making a sweet, tinkling timbre like a great big beautiful percussion instrument.”

So many wonderful memories in this labour of love, a combination of the determination and natural talent of one young man, guided and supported by the expertise and wisdom of a master, in the grand tradition of the passing-on of knowledge and craft. 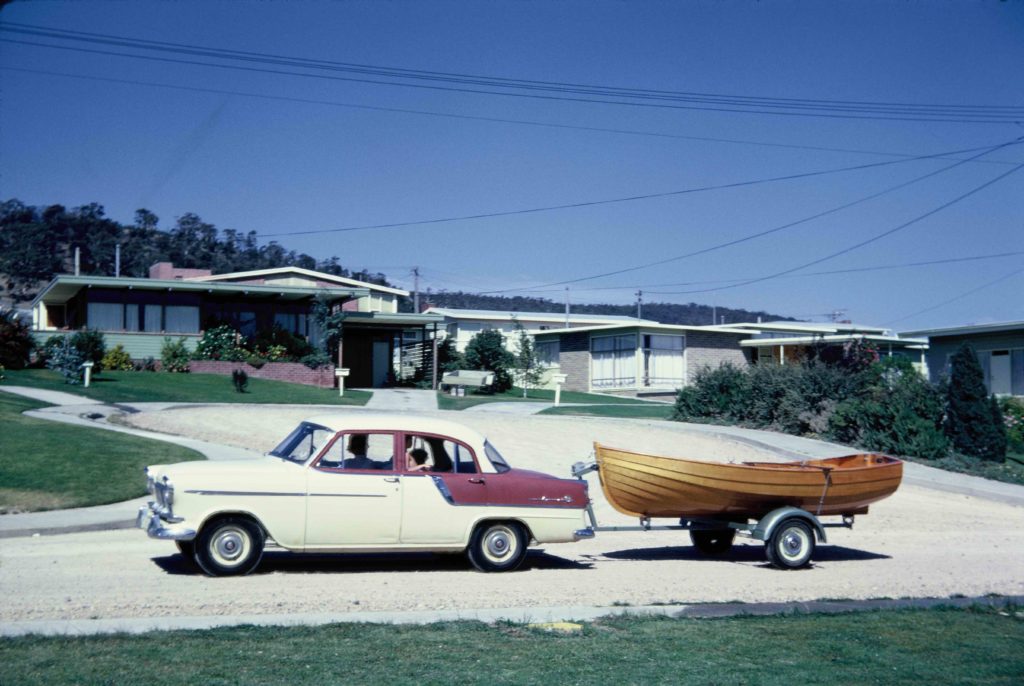