Sailing at the Top of the World 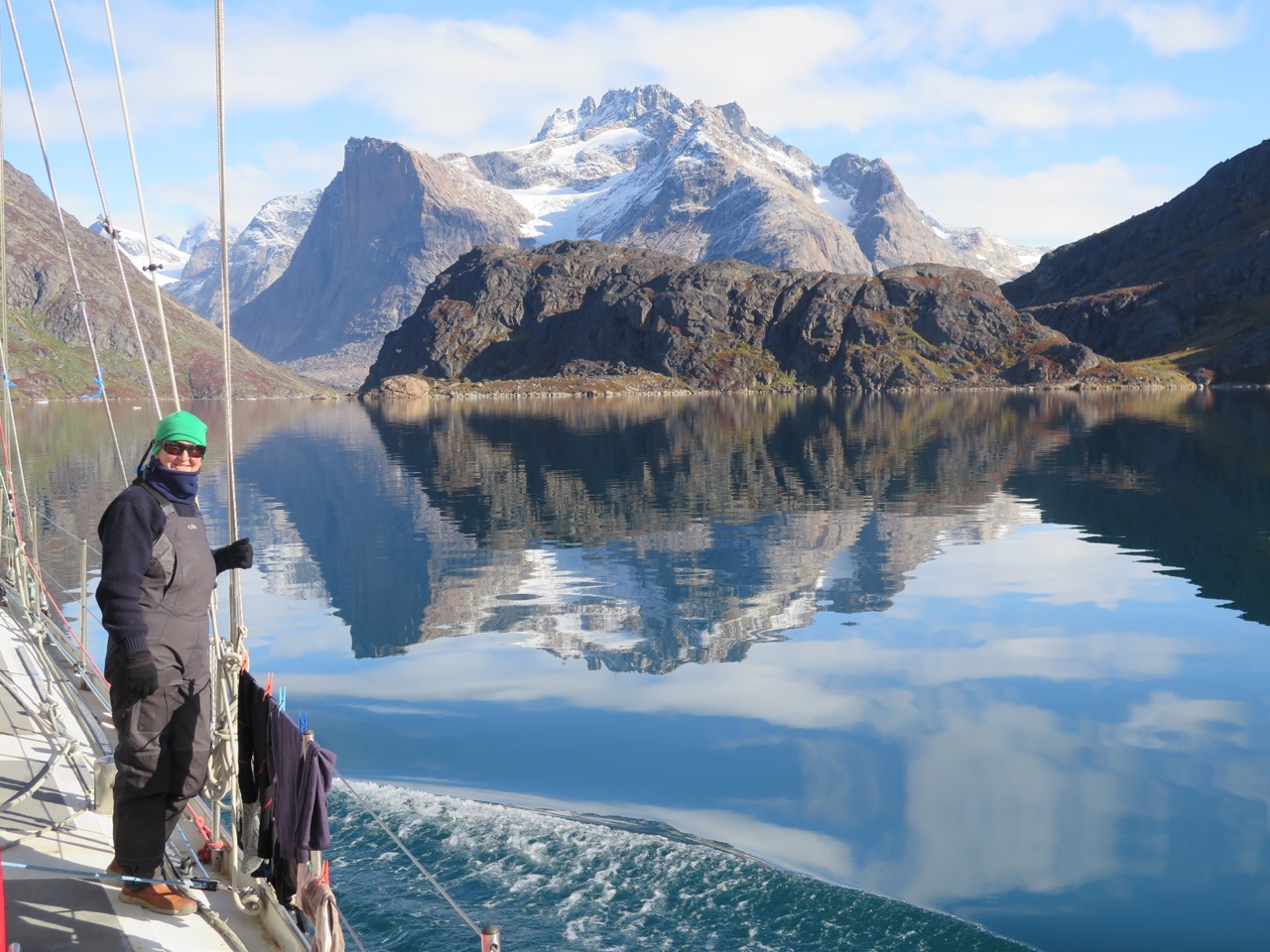 After finishing her 2017-summer contract with the Australian Antarctic Division, former multihull ocean-racing sailor and co-founder of the Australian Wooden Boat Festival, Cathy Hawkins, sailed monohull, Abel Tasman, 4,427nm from Australia to Kushiro, Japan. From July she clocked-up another 7,155nm on board Abel Tasman from Dutch Harbour in the Pacific Ocean’s Aleutian Islands, through the Arctic Ocean’s notorious Northwest Passage to the Atlantic Ocean and onto Greenland and Norway.

Abel Tasman is a 23m Bermuda schooner derived from the elegant lines of America 1, which was designed by George Steer. Abel Tasman, with her clipper bow and tumblehome sides, was built in 1981 in Westerbroek, Netherlands and is skippered by Antarctic and Arctic expedition support vessel operator, Roger Wallis. Abel Tasman’s steel hull is 10mm below the waterline and 8mm above which makes her ideal for passage making in high latitudes.

The following is an excerpt from Cathy Hawkins’ exciting five part series about her adventurous passages through the Arctic’s high latitudes to be published in full in Cruising Helmsman magazine from January 2018. Cathy will be returning to the northern high latitudes soon to help run an expedition yacht charter business.

Balancing on the sides of Abel Tasman’s tender we clutched the necks of our wet weather jackets so that freezing salt-water spray, coming in jets off the bow, detoured past our necks. Sheets of dollop-sized snowflakes streamed past us, rapidly smothering everything in their united whiteness. We were cautiously motoring into Nuuk’s black evening, looking for Abel Tasman in a snowstorm.

It was the first and way-too-early, dump of ‘winter-like’ snow that Greenland had in Autumn 2017. Together with Yvan Bourgnon’s Ma Louloutte and Amundsen’s Maud, Abel Tasman was the last boat through the Northwest Passage in 2017. By late September it was palpable, as the days grew shorter, the sea and air temperature became icier and the weather deteriorated more frequently, that we had to be on our way. It was late in the season to sail back across the Arctic Circle to our final destination of northern Norway.

Maud’s Norwegian crew (advised) us to clear into Norway at Bødo then slip Abel Tasman at Sund in the Lofoten Islands to fix her twisted, ice-smashing propellers. ‘Don’t cross the Norwegian Sea any later than mid-October or go north of Iceland now’ they said. We had a 2,388nm passage ahead of us from Nuuk on Greenland’s west coast to Tromsø, Norway.

Sailing south, the local wind bore little semblance to the overall pressure system. There was no prevailing wind direction as it tended to blow as much from one direction as it did from another dictated by a challenging topography of sheltering bluffs, craggy mountains, divided fjords, sounds and connecting channels all under the influence of ice.

A cold arctic current off Greenland’s east coast flows south bringing freshwater pack ice from glaciers. When icebergs reach Greenland’s southern tip off its west coast they are deflected north by the Gulf Stream where they collide with larger ice masses calved from huge iceberg-producing glaciers.

After a couple of nights offshore, glued to the radar looking for icebergs and growlers, under halo phenomena and a brilliant aurora we arrived alongside Qaqortoq’s wharf in darkness. We threw our lines to a welcoming and enthusiastic upper class English voice that sounded like Queen Elizabeth II greeting us with praises of, ‘well done – a very well thrown line’.

We squinted quizzically at one another as we registered the sight of a mature woman adeptly securing our dock lines attired in a string of pearls, pretty frilled collared shirt, cardigan with a hanky protruding from its sleeve, make up and a silk scarf smartly knotted under her chin while simultaneously inviting us to a cup of tea on her boat!

We discovered that the cultured voice belonged to 70-something year old Jane Maufe, who was the 4th grand niece of Artic explorer and former Governor of Tasmania, Rear Admiral Sir John Franklin.

Jane Maufe was the spritely crew of evenly aged and equally spritely David Scott Cowper, on a custom-built 30-ton aluminum, self-righting, all weather motor vessel, Polar Bound, that boasted 12 times the required Lloyd’s specifications and was regarded as the strongest vessel of her size in the world. And perhaps it was, with its lifeboat lines, four watertight bulkheads, double-hulled engine room, double bottomed forward section, a center wheelhouse, coach roof and painted yellow –along with a smug Gardner engine contentedly purring below deck.

David had achieved all manner of record-breaking passages as the ‘first’ to do a whole bunch of things in Polar Regions and elsewhere. He had wowed Jane, a girlfriend from his youth, after her husband died. They made an endearing adventuring team over tea party chatter curiously laced with knowledgeable discourse derived from being serious mariners with all the skills and experience to survive and thrive in polar waters.

As inspirational characters, I reflected on the demographic of most of their counterparts comfortably kicked-back in hearthside electric armchairs discussing, perhaps, which Doris Day movie to watch while Jane and David battled ice and isolation with great seamanship, resourcefulness, humor and resilience. A chronicle of which is authentically disclosed in Jane’s Bloomsbury published book The Frozen Frontier.

After an entertaining and informative conversation we left Polar Bound with a plan to rendezvous in Nanortalik before entering Prince Christian Sound and going our separate ways – Polar Bound across the Atlantic back to Scotland and Abel Tasman heading into the Iceland Basin and the Norwegian Sea.

Our short passage south to Prince Christian Sound was on a perfect windless day as we skimmed through brash ice past snow-covered peaks and circumnavigated the most wildly shaped icebergs.

The greatest width of the Sound is 2nm narrowing to .25nm. Its awesome flanked shores are jagged, sheer and wind and ice scarred. Gleaming white icebergs, creating a mystical barrier, heralded the entrance to this paranormal place that has the reputation of being more dramatic and beautiful than New Zealand’s Milford Sound.

In awe, we motored on-and-on into the heart of the Sound – our heads lifted skyward to a vertical landscape of splintered summits plunging to shoreline, glacier polished boulders clad in glowing autumn vegetation cowering in protected crevasses or soaking up south facing sunbathed surfaces. Past baby – alas receding – glaciers falling short of the shoreline in networks of pulverised shale. Waterfalls, on the verge of freezing, collapsed over cliffs in hesitating gushes.

Out at sea in the Iceland Basin it was uncomfortable in a steep and cranky backwash swell. The slowly disappearing reddish foreshore was heavily scarred by ice action and, with icebergs still drifting menacingly along the coast; our sheltered break was over as we contemplated the remaining miles. It mattered little that we were heading into bad weather – a sort of weather indifference emerges when you’ve been at sea for a long time. The only cursory thought is one of intensity – how bad is bad going to be.

Four days later…. Iceland’s south coast was clearly visible to our north. Dissected by glacial torrents falling into the sea, perpendicular walls of snow-capped dark basalt rose from the coast. Icelandic habitation lay on low narrow shelves in pockets along the shoreline. The elevated volcanic landscape above these shelves was entirely uninhabited.

In a 40-knot gale, we cautiously approached Hoefn, pushing a strong ebbing current with heavy surf breaking over scattered rocks lying at its entrance. It felt like a serious place to be reckoned with.

On cue, within the next 12 hours, we were hard on the wind in 45knots being peppered by marble-sized sleet. Abel Tasman handles these conditions beautifully with her staysail and reefed schooner sail, which provides well-balanced helm. Since departing Cairns in April 2017 the boat had done close to 15,000nm without an autopilot so these conditions gave us a welcomed break from helming. Yet again we seamlessly crossed the Arctic Circle and passed over the Greenwich Meridian to the east. In huge seas that made me stagger and rescue airborne objects fleeing from incensed cupboards, a school of visiting pilot whales surfed the wave barrels breaking high above our mainsail boom.

(Abel Tasman reached Tromsø after 15,238nm of safe passage-making from Cairns to Japan, to the Kuril Islands and Kamchatka, the Aleutian Islands, Alaska, northern Canada, the Northwest Passage, Greenland, south of Iceland and Norway. – ed.)

Some of the things I discovered about high latitude sailing, in my staggering merry-go-round way, is that the anticipated spookiness and fear are only in your head. Moment-to-moment and mile-after-mile you simply troop-on rewarded by an inexhaustible supply of surprises, which grace you in their daily revelations.

In no time at all, the remote ruggedness of where you are and what you’re doing becomes addictive although I do recall paraphrasing my age-old shallow, short-lived prayer that goes something like…’if I get through this I promise never to put myself through this again’.

Bit-by-bit, you learn to trust that the journey and all its demands and challenges will strengthen and enlighten you in unexpected ways in places and situations bigger than your imagination. You find and lose yourself among auroras, snowstorms, icebergs, Polar Bears, fogbows, whales and unlikely friendships where age, skin colour, creed and nationality matter zilch.

My favourite quiet times were on my night watches as a mere iota in the cockpit of a black boat under a giant sky on a vast ocean. It was both crushing and consoling in the same moment.

The passages through unsounded and unnamed places enabled me to step out of a place I knew too well and into places that have staked their claim on what’s worth remembering in life and how those tales, even to my own ears, sound extraordinary.

Travelling to the high latitudes of Antarctica and the Arctic has expanded the dimension of my world and as it’s grown so have I.