Learn a new language while you sail – Sailing Speak 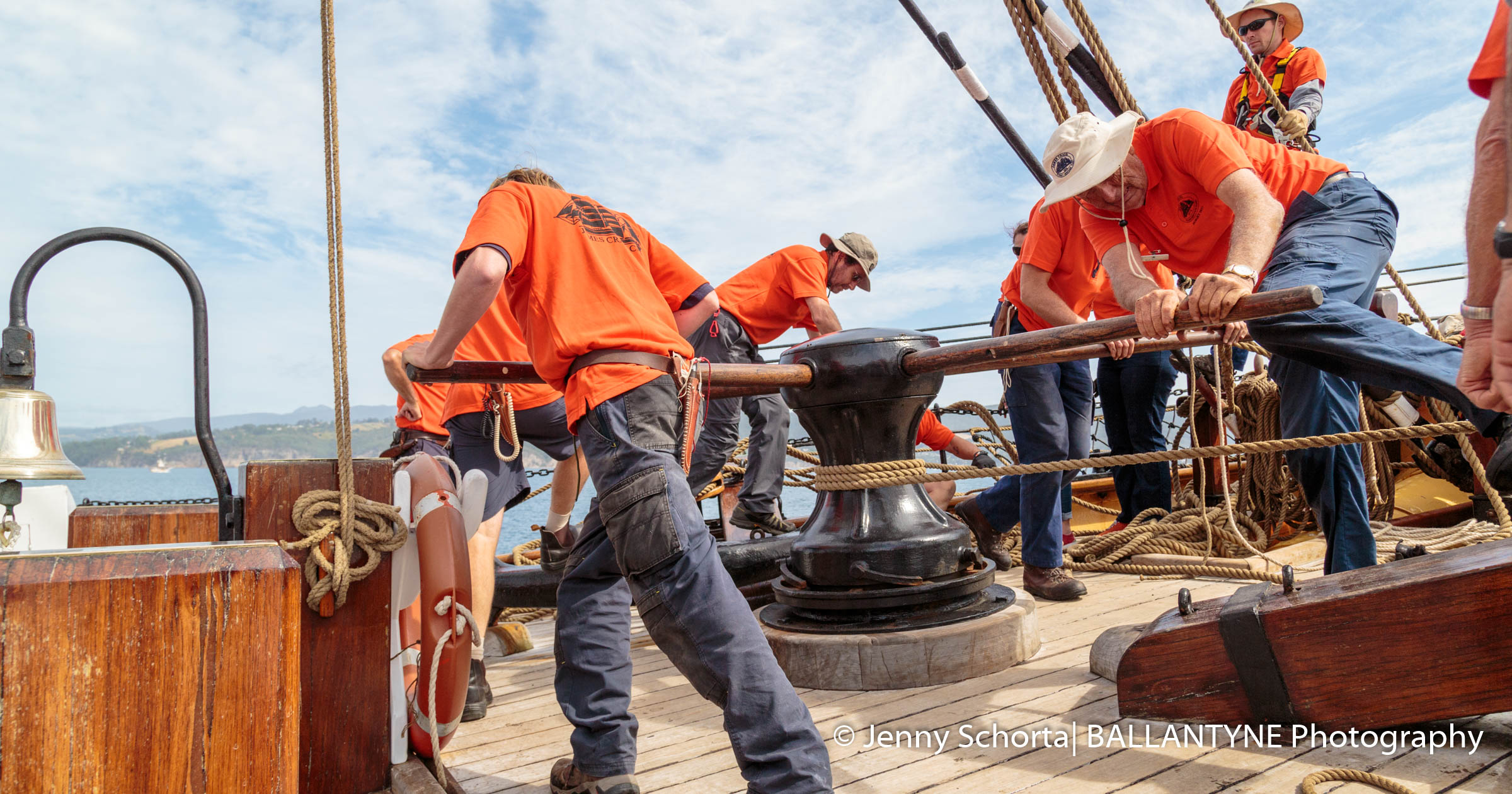 Are you ready ? Let’s pull the anchor up and get going …

Now here we’ve hit a problem already! The language of mariners is vast, magical and just a little bit daunting. You’ve got this far, let’s give it a go.

Apparently, you weigh an anchor. That must be some set of scales. To weigh an anchor (the big pointy thing that hooks into the seabed – not an English dairy product) means taking some drawers out of a capstan (Capstan not Hat Stand – a big rotating drum) and replacing them with bars (wooden poles – not ale houses!).  Then a messenger is wrapped around the capstan and passed on occasions through Pulleys. Many many times! What did the poor bugger do to deserve that! Now it gets even uglier! Now we need to attach a load of Nippers to the Messenger and seize them to the anchor cable!

Let’s take a break– Rest easy! The messenger is a rope, not an errant post boy. Nippers, too are also ropes – short ones. They are all used to seize the messenger at various intervals, to the anchor cable, (another rope, not a telegram from the newsroom) which is both huge and wet. It’s so big we can’t wrap it around the Capstan. Hence the Messenger. Seizing is a special way to lash the Messenger to the anchor cable. Trying to untie wet knots, especially big ones …. You’ve been there. This system works much better. Anyway back to sailing language ….

So now we have the messenger wrapped around the capstan and run through pulleys. We have it seized to the Anchor cable with nippers and we are ready to weigh anchor. Still with me?

OK how’s your singing voice? Rusty? Never mind. Join in anyway, it will help you with the next part. We have a few fiddle players here to help too. Seriously! We do! Weighing the anchor is a serious business that needs to be done in a measured way. Keeping rhythm, with the music is the way we do it. So here goes let’s sing a Forebitter.  Don’t give up now! Just hum it if you don’t know the words. We’ll jump this language barrier yet.

Now because we are on a really big ship, we have a couple of decks (floors or storeys) at work. Below ours is another where more Nippers will be helping out. Hang on I thought you said a nipper is a rope?! How can a rope ….. ? Oh! I see your confusion! These Nippers, are small boys. And they will be undoing the Nippers as they come aboard. You’ll see! Just persevere.

OK – sing and start pushing on those Capstan Bars. Not that way! The other way! There’s one in every crew!

Now as the Capstan turns and the Messenger pulls up the anchor cable, a few things happen here at the same time.

Above decks (upstairs), as the anchor begins to be weighed (there are no scales involved), the ship changes position (like tipping the scales – see the link. Clever hey!) The more the anchor and cable move, the more the ship moves. An Officer (smart bloke, sharp suit, bad sense of humour), records these changes by yelling things like “At Long Stay” or “At Short Stay”. These are not holiday destinations or penal colonies but references to parts of the rigging (lots of other ropes and wooden bits) that are in a specific part of the vessel (ship). Finally, he will yell “Up and Down”. Finally! something we have a chance of working out!

All the while the crew are pushing the capstan bars and singing (no the bars are still wooden poles). The nippers are un-seizing the nippers and the messenger from the anchor cable and now we hear the Officer yell “Anchors Aweigh” What?!!! (the anchor has left the seabed).

For those of you who have got this far. Congratulations, I feel you are natural linguists. Do you have salt water in your veins? We are not far from getting under way now (sailing). Just got to get this metal thing tied off.

So now we have it. A big anchor cable just outside the hatch with the messenger seized on by nippers and the big metal pointy thing just breaking surface. Now we have to Loop a Fluke, Haul in and Cat the Anchor. Because we are heading to sea and it’s looking a little rough out there, we are also going to untie the cable and put a Buckler over the Hawsehole. Simple!

Translation: we are going to put a loop of rope around one point of the anchor and use it to lift the anchor into a certain position and tie it off alongside the hull (side of the boat). We will then untie the Anchor cable and put a shield in place to cover the cable hole, offering a little weather protection to the anchor.

The Buckler, was a shield that also found fame in the term Swashbuckler. A name given to those dashing swordsmen (often pirates) who used the shield in conjunction with their swords.

And there you have it. Now to Set some Sail! How about a Top Gallant, or Mizzen? Perhaps a genoa, jib or maybe a main?….

Want to learn a new language in a fun and exciting way, find a local Tall Ship operator and join one of their cruises.

For those in Australia, here are a few links to Tall Ship Operators who have generously supported the Australian Wooden Boat Festival:

Thanks to the SV James Craig and Pennicott Tours, for facilitating the shoot.