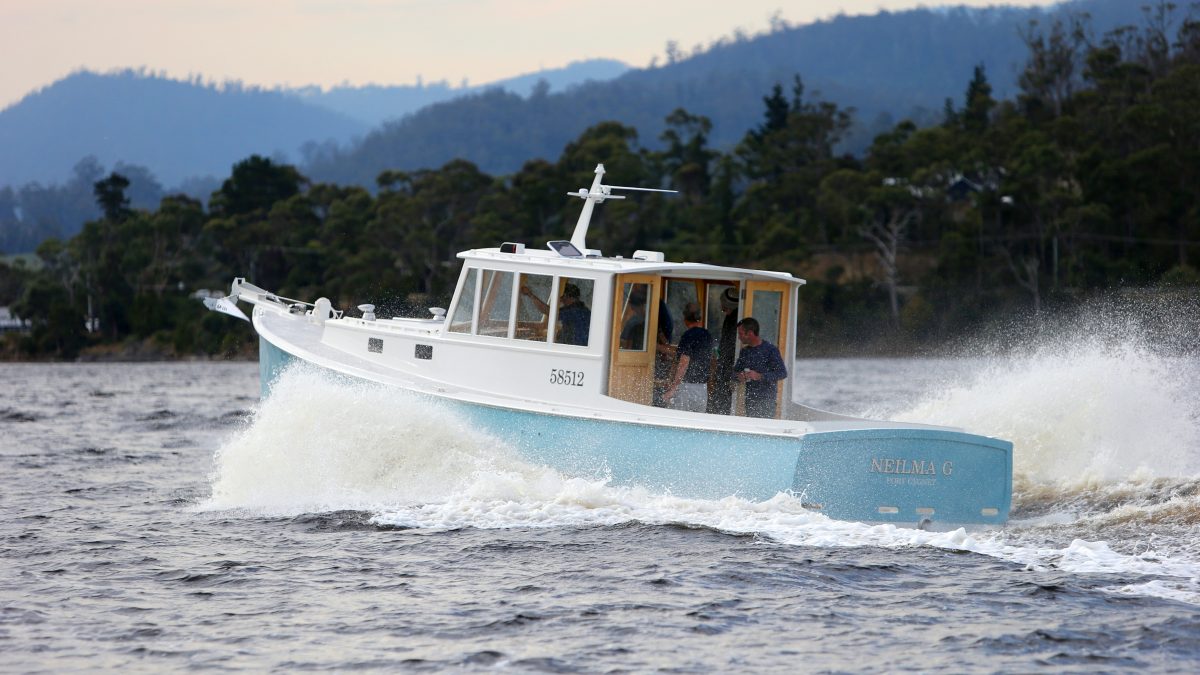 From the historic old shed at Wilson’s Boat Yard in Cygnet comes Neilma G – the brand new carvel planked Huon Pine custom lobsteryacht to be on show at the 2021 festival.

The 35ft ‘lobsterboat’ was inspired by fishing boats along the coast of Maine, New England, and named after Philip’s aunt. While she’s not a direct copy, she’s an interpretation that all parties are thrilled with. The handsome machine will be used as a pleasure or picnic boat with overnight accommodation in Tasmanian’s beautiful cruising and fishing grounds.

“She’s looking good,” Philip says, “We’re very proud she’ll be at the festival and when she starts getting out, we think she’ll get quite a lot of attention.”

Timber for Neilma G was harvested from Lake Pieman which Philip says it has been “waiting patiently” to be used. All structural members – keel and stem, structural floor timbers and engine beds are Celery Top Pine. The steam bent frame is also Celery Top Pine. All fasteners are silicon bronze, cabinet sides are solid Huon Pine, as is the interior trim. While decks are laid with marine grade plywood and epoxy sheathed plywood.

“What’s significant about the boat is with the backbone structure we’ve laminated and epoxy glued all of that, we have a very strong single piece – this will give longevity to the boat and extra strength,” Terry says.

She is the latest vessel to emerge from Wilson’s Boat Yard’s shed. And with such great workmanship on offer, a new shed has been recently erected. Climate-controlled, and a lot safer, the new shed is a welcome feature for John and his team.

“In the old shed it is hard to control dust and temperature,” John says. “It’s important for our cold winters to paint in a stable temperature and with no dust – plus resin can cure at the correct temperature.”

Wilson’s Boat Yard, established in 1863, is one of Australia’s oldest continually operating boat building businesses. The business had a number of locations dotted around Cygnet harbour over the years. The early sail trading ketches built in Tasmania were a major part of the state’s maritime workforce and the Wilson’s building and design service spans the history of the ketches through to their conversions to motor vessels in the 1930s.

John says it is important to retain a wooden boat building tradition in Tasmania, and that is why he’s put so much time, money, and energy into keeping Wilson’s running.

“My grandfather and father were shipwrights from Newcastle in the UK. I just want to keep the trade going and provide a future for employment and clients alike through the Wilson legacy.”

Michael Wilson, a fourth generation Wilson to work in the industry, is thrilled with the boat yard developments.  “It brings great joy to my heart that John and his crew are keeping the traditions of wooden boat construction alive in an area where this has been such a tradition, not only for my family but others,” Michael says. “I felt it was really nice when John approached me about keeping the Wilson name attached to the present yard – a real honour to my past family members.”

In the early days at Wilson’s, boats were built for trade, large ketches and schooners for various clients to move goods both locally and interstate. In wartime many of these vessels were taken into service and used by both the navy and army.

“When my father Noel came into the business after the second world war the scene was changing, wooden boats were no longer used that much for transporting of materials but wooden fishing boats were,” Michael says.

“So they were primarily building wooden fishing vessels of various sizes, with a few pleasure vessels and racing yachts as well. And the last couple of decades pleasure craft and classic vessels were the main vessels constructed.”

We’ll keep you posted on Neilma’s G. next journey!