A Boat By the River 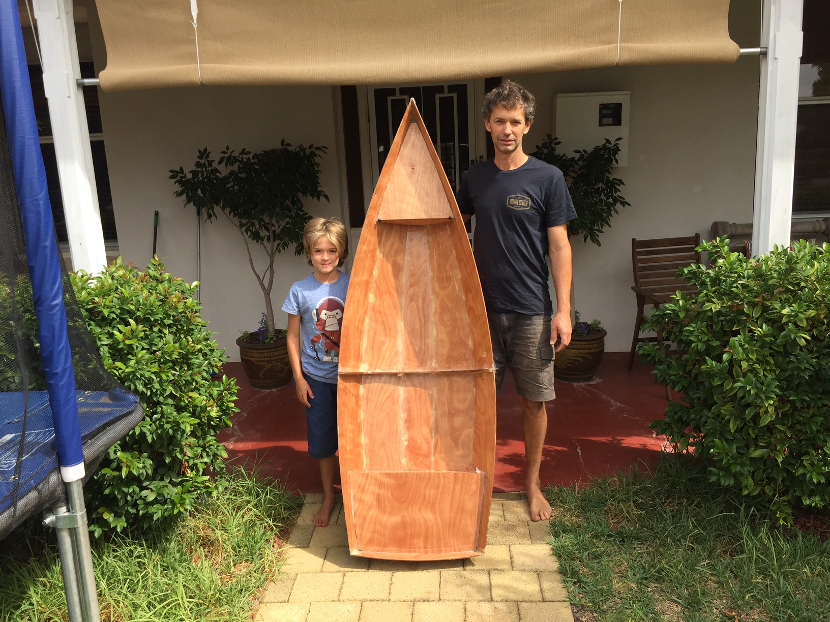 Pete Ripley and his son Gus with one of the latest prototypes.

A Small Boat With Many Parents

A feature of the 2021 Australian Wooden Boat Festival will be a return of what was originally called the Johnston Mini Boat. This wonderful little boat made its first appearance in the 2015 AWBF when a number were built quickly, at the show, and then paddled by enthusiastic children around Constitution Dock.

This original boat was designed by local Tasmanian identity Ian Johnston who recalls that the boat was heavily influenced by a larger design by Jon Smeeton. So it already had two fathers.

Attending the 2015 Festival was John Longley, a crewman of Australia II and Steve Ward who built the famous wing keeled winner of the Americas Cup in 1983.

Both were very taken by the little boats they saw paddling around Constitution Dock.  Steve, who at that time was Rear Commodore at Royal Freshwater Bay Yacht Club, commented that one of the problems in getting very young children to start sailing was that when you put them into an Optimist, or similar dinghy, they had so much to contend with. They had to steer, attend the main sheet, not get hit on the head by the boom, not be terrified if they capsized and have the responsibility of being in command and making decisions as to where to go –a lot for a 6 or 7 year old to take on at once.

What attracted Steve to the little boat was that it allowed children to experience being in charge without all the other considerations. They would also simply have fun and even if they capsized in the shallows it was no big deal. The other attraction was for the child to learn that you don’t just buy a boat – you can build one as well.

John and Steve returned to WA and the memory of the little boat went on the back burner because they had seen a St Ayles Skiff at the AWBF and were mad keen to get that program going in Western Australia.

A few years later John contacted Ian and asked for the plans to his little boat. These duly arrived and John built one for his grandson who at the age of 6 did not immediately take to it, but a year later you could not keep him out of it.

Steve Ward’s interest was re kindled but he was not quite happy with the design forward of the main frame so he did a tweek and then produced some Mylar templates which could be used to make a CNC file because it was considered that if the boats were cut out very accurately they would be much easier to build than doing so with a jigsaw from paper plans. The boat now had four fathers.

The next stage was to turn Steve’s redesigned boat into a CNC file.  Enter stage left James de Bere, a naval architect who, at the time was working with Austal Ships, and whose day job was designing Naval vessels.  James, who has had a lot of experience designing kit boats, did a few more tweeks before creating the CNC file.  After a few prototypes were cut  out by O’Connor Wooden Boats to do test builds, we now have a very accurate kit that pulls together beautifully and a little boat with five fathers.

So the plan is to now cut these boats out and with detailed instructions featuring Steve Ward actually building a boat, recruit 25 child and adult teams to build the boats prior to the next AWBF. Rather than being built hastily we are encouraging the builds to take place at a more leisurely pace so that the children can learn both boat building skills and life lessons at the same time, of which there will be plenty.

The kits are so accurate that there is no need to build them on molds, an old garden table will do the job. One of the prototype builders, Andrew Locke, had polio as a child and built the boat sitting down all the time.  Andrew provided a lot of input into the instructions and can be seen as another father.

So if you are keen to build a lovely little boat for a 6 to 10 year old now that you have more time on your hands than you might have planned, contact office@awbf.org.au.