More Awards Than You Can Shake a Stick At 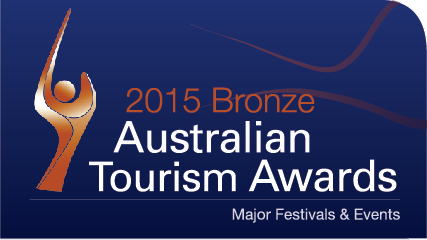 [vc_row][vc_column][vc_single_image image=”1329″ img_size=”1200×800″ alignment=”center”][/vc_column][/vc_row][vc_row][vc_column][vc_column_text]Vice Chairman of AWBF, Inc Peter Higgs and Office Manager Bronwyn Hansson accept the Hobart City Council’s Australia Day Award for Best Community Event of 2015.[/vc_column_text][/vc_column][/vc_row][vc_row][vc_column][vc_column_text]It must be the season, but we’ve had to make more room on the trophy wall in the AWBF office to accommodate three major awards carried off in the last five months.  In October 2015, we were pleased to win the Gold Medal (Major Events and Festivals) at the Tasmanian Tourism Awards.  This prize recognised the tremendous effort put into the festival by more than 400 festival volunteers (including an all-volunteer Board of Directors) and 550 wooden boat owners, to produce the largest wooden boat festival in the Southern Hemisphere.  On Australia Day, Hobart City Lord Mayor Sue Hickey conferred the HCC Community Event of the Year Award on the festival, acknowledging the tremendous positive impact that the AWBF makes on the City of Hobart, not just in economic terms (although that is significant) but also on the people of Hobart in terms of pride, cooperation and social inclusion.  And then to top all of this off, Chairman of the AWBF Steve Knight travelled to Melbourne to attend the prestigious Qantas Australian Tourism Awards.  There he accepted a Bronze Medal for Major Events and Festivals, awarded the the 2015 festival.  The other two winners in the category were the month-long national horticultural festival in Canberra, Floriade (Silver) and The Melbourne Cup (Gold), so we were in very elevated company.  Steve commented ‘Many well-wishers approached me after the ceremony and offered congratulations that a community event run by a nonprofit organisation and staffed largely by volunteers could compete in such company.  We’re very proud of this win.'[/vc_column_text][/vc_column][/vc_row][vc_row][vc_column][vc_single_image image=”1330″ img_size=”1200×800″ alignment=”center”][/vc_column][/vc_row][vc_row][vc_column][vc_column_text]Of course, awards do not make a great festival – it’s the hard work and long slog of planning, design, creativity and invention that turn a great idea into a successful event.  GM Paul Cullen said ‘These wins are fantastic to recognise the professionalism of our events team and our whole organisation.  The AWBF has been producing highly regarded and enormously popular festivals on the Hobart waterfront since 1994.  Sometimes, we think, it’s a little taken for granted that the festival will simply happen because it’s always happened.  But it’s in the detail:  our Dock Master knows every square inch of the working port.  Our Media Manager has a contact list that a prime minister would envy.  Our Commercial Sales Manager has doubled and doubled again the support that our maritime exhibitors contribute to the festival.  Our team of photographers has compliled an extraordinary catalog of 100,000 images that we use constantly.  Our Volunteers Manager is a volunteer herself.  It’s quite a crew, and these state and national awards, judged by people who have no connection whatever with the event, recognises them for the amazing people they are.'[/vc_column_text][/vc_column][/vc_row][vc_row][vc_column][vc_single_image image=”1331″ img_size=”400×700″ alignment=”center”][/vc_column][/vc_row]