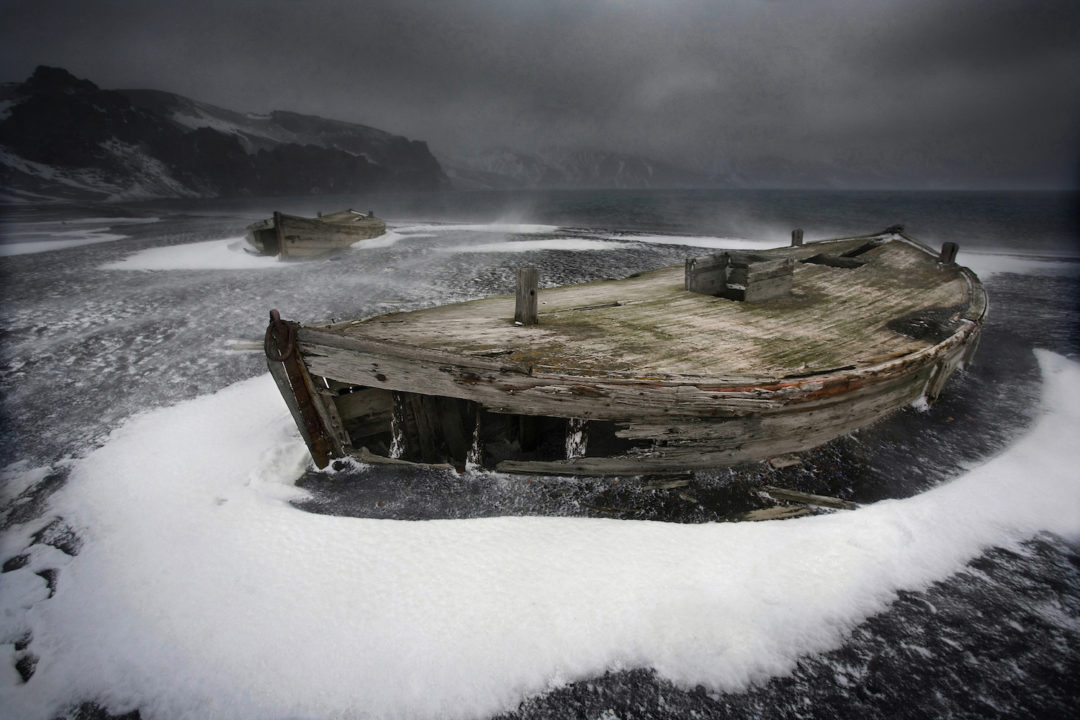 The early exploration of Antarctic waters south of 60 degrees South was perilous in the extreme, not just because of the weather conditions (the ‘Screaming 60s’), but also because of the constant threat of collision with massive icebergs, closing sea ice that could trap a ship in an hour and impenetrable darkness for much of the year. It was a brave master who would take a wooden ship into these waters and yet that is exactly what may did in what became known as the Heroic Age of Antarctic exploration.

While Magellan, Drake, de Hoches and Schouten explored the southern extremities of the South American coast in the 16th and 17th centuries, it wasn’t until Lt. James Cook crossed the Antarctic Circle (66°S) that the era of Antarctic exploration in wooden ships began. Just getting to Antarctica involved braving 50’ seas and hurricane force winds. Once there, sailing ships were vulnerable to pack ice, which generally moves in the direction of the wind. The famous photographs of Ernest Shackleton’s ship Endurance, being inexorably crushed by closing ice, demonstrate its lethal power. The last sail-powered ships to challenge the ice were Erebus and Terror, under the command of James Clark Ross in 1839. After that, the advent of steam powered propellers made it possible for heavily strengthened ships to ram the ice and push through where sail-powered ships could not go.

The Terra Nova was steam powered, but still had a wooden hull when it carried Robert Falcon Scott on his ultimately fatal attempt to reach the South Pole in 1912. Another wooden ship, the Fram, had been specifically designed for polar service. Built by Norwegian/Scots naval architect Colin Archer, the ship was laid on a keel of 14’ square American elm with frames of Italian oak grown to shape and seasoned for 30 years. Massively strong, the ship had a round bottom which caused it to ride upwards as the pack ice converged, popping it out ‘like a cherry pip squeezed between thumb and forefinger’. It was the Fram that carried Roald Amundsen on his successful bid to reach the South Pole in 1911-12, penetrating to 78°S, further than any ship had been before and returning safely to Hobart, where Amundsen announced his victory to the world.

The Fram was one of the last wooden ships to go to Antarctica as part of a national expedition. In 1931, the British research vessel Discovery retired from service from the British Australian and New Zealand Antarctic Research Expedition (BANZARE). The 172’ barque, powered by steam and sail, was the last chapter in the Heroic Age of Antarctic exploration in wooden ships.

The Australian Wooden Boat Festival is working with the Mawson’s Huts Foundation to produce the Australian Antarctic Festival in Hobart, from 8-11 September this year. The festival celebrates the thriving Antarctic community and Hobart’s long history as Australia’s Antarctic port. Details at www.antarcticfestival.com.au