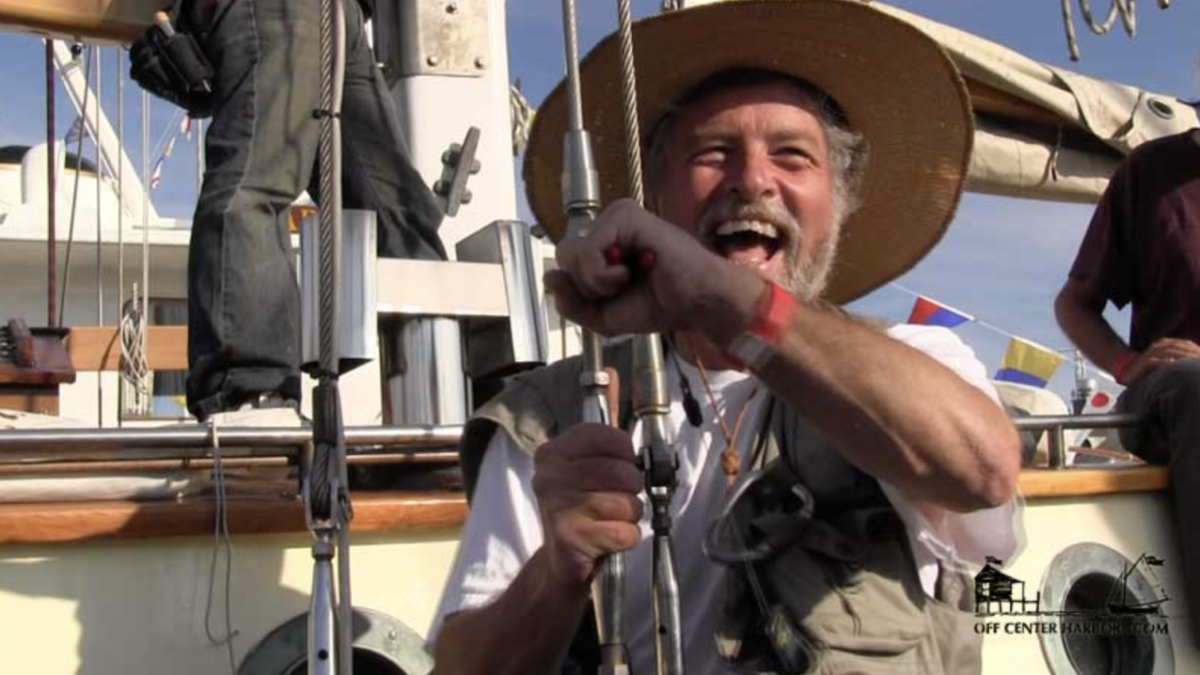 Brion Toss was a force of nature, a rigging raconteur, the consummate teacher. From arrival as a founding presenter at Port Townsend’s Wooden Boat Festival (first in the nation, 1977) he became one of the year-round anchors in Point Hudson—setting up shop as Brion Toss Yacht Riggers—an icon of our maritime culture. Over 40 years, in addition to full-time rigging work, he authored countless books, blogs, articles, podcasts, and videos with unforgettable stories.

From humble beginnings as a teen “intrigued by knots and falling down the rabbit hole,” Brion Toss was the first American invited to present at AWBF’s first International Wooden Boat Symposium (2015). I was lucky to be there and introduce him and again in 2019. Both times, he taught to capacity crowds at the UTas theatre and carried on teaching in spontaneous, Pied Piper-style mini-demonstrations throughout the festival, all weekend. People huddled around him in cockpits, at tables in pubs, joining human splices and knot tying competitions in crowds that included gray bearded men, cruise ship ladies, and children. He could teach knots to anyone and did.

Brion and his beloved Christian (He endearingly referred to himself as her “hersband.”) made their first trip to Australia in 2014—consulting with stewards of legendary tall ships like James Craig and HMB Endeavour in Sydney, Polly Woodside in Melbourne, and reconnecting for a sail on Holger Danske in Tasmania with long-time friend and former rigging apprentice, Joy Phillips (now AWBF board member). Upon hearing of his death, Joy recalled. “I was a kid in my early 20s when I started working for him in Port Townsend. I was winching him up a mast and froze with a bolt of fear—the responsibility of his life in my hands. ‘Fear is good,’ he told me. ‘It’s there to make you aware’. Off we went, to the next spreader. Totally in the moment. Doing what I needed to do—NOW. In every task, he taught me how to live.”

Brion remembered everyone—wove stories of the people he met, questions pondered, and their solutions into the next teaching opportunity. After his third trip down-under, AWBF 2019, Brion mused about wooden boat events in a blog post titled: “The Least Likely Festival in the World.” {http://briontoss.com/index.php/2019/03/20/the-least-likely-festival-in-the-world/]

From a lifetime spent splicing words, ropes, and worlds together, he wove our events together. In my mind, forever. Embracing the weird—those unarticulatible yet immediately recognizable bonds we find in one another. Those uncanny madcap urgings that draw us to wooden boats in the first place, that sustain us over distance and time, that linger in stories when we’re gone.

To those who met Brion no doubt you’ve got a story. A humor-infused lesson. A problem solved through boisterous exchanges infused with love. If you’re lucky, you’ve got a souvenir—a soft splice, a crown knot, some rigging on your boat, or a book or two or three signed by Brion on your bookshelf. Hold onto it. Add it to the family’s Facebook page: Brion Toss Life Memories.

There’s no better writer to quote and close with—to connect Brion’s life to his legacy—than the man himself. In the final chapter of his last book, Falling, Brion wrote: “Life is unutterably precious, unbearably fragile, but it becomes flimsy and shallow if your primary aim is to preserve it. Risk it. If you huddle in a safe space, you might live longer, but you will not be fulfilled. Risk your life, at some point, to some extent. Do it with enough training and gear that your chances of survival are excellent. But do something that will let you know how close Death is, and how amazing Life is.”

May the lessons we’ve learned from Brion Toss live on—knot and knever forgotten.