Why I keep my boat at South Haven Marina

Using Your Windlass the Right Way 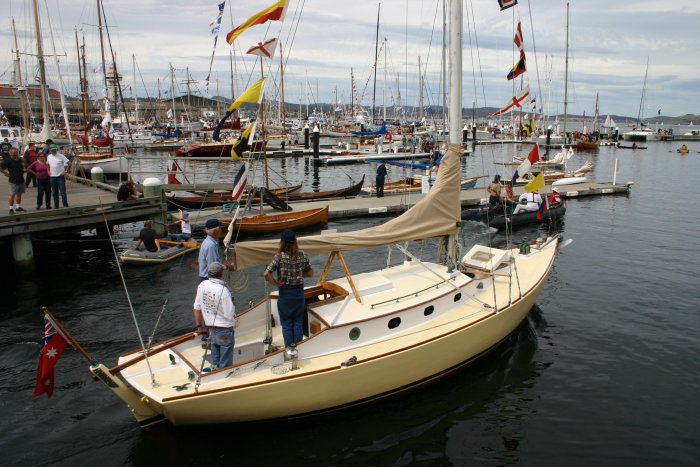 As well as owning Maori Lass for the last 23 years Roscoe and Cheryl Barnett have a collection of assorted clinker dinghies and a couple of Piners Punts as well!

Tim Oxley recently caught up with Roscoe to ask him about Maori Lass and where he keeps her.

TO: Roscoe, what can you tell us about Maori Lass?

RB: Maori Lass was designed by H.E. Cox and was built by Ron Andrewartha assisted by his two sons in Letitia Street North Hobart in 1948/9 and launched from Franklin Wharf in 1950. She is built from Celery Top Pine on Blue Gum frames and weighing in at 6 tons.

She sailed and raced the Derwent before heading to Sydney, on to the Great Barrier Reef then in 1976 headed off from Darwin, returning

to Sydney in 1982 via the two canals. When Cheryl and I took over the custodianship in 1993, she had been let go for a few years and we started the restoration job that is still in progress today! She has been splined from the keel to the waterline and had new floors, mast step, some refastening, some new ribs, new decks and numerous other jobs. I am currently replacing half the galley.

She hasn’t been used as much as I would have liked, but now I’m retired things will change! Cheryl loves sailing and we plan to enjoy more time exploring the channel.

TO: And you have some special items which go with Maori Lass.

RB:  I met the Andrewartha family shortly after we purchased Maori Lass her and fortunately I have accumulated a substantial amount of memorabilia along with the original blueprints, a half model and recently a full size model, ¾” to the foot which was also built in 1949 by the builder’s son Bob.

I feel very privileged to have all this material relating to her.

TO: And where do you keep your boat, Roscoe?

Thanks, Roscoe for telling us more about Maori Lass!

Want to tell us more about your boat and where you keep her? Contact oxley.tim@gmail.com