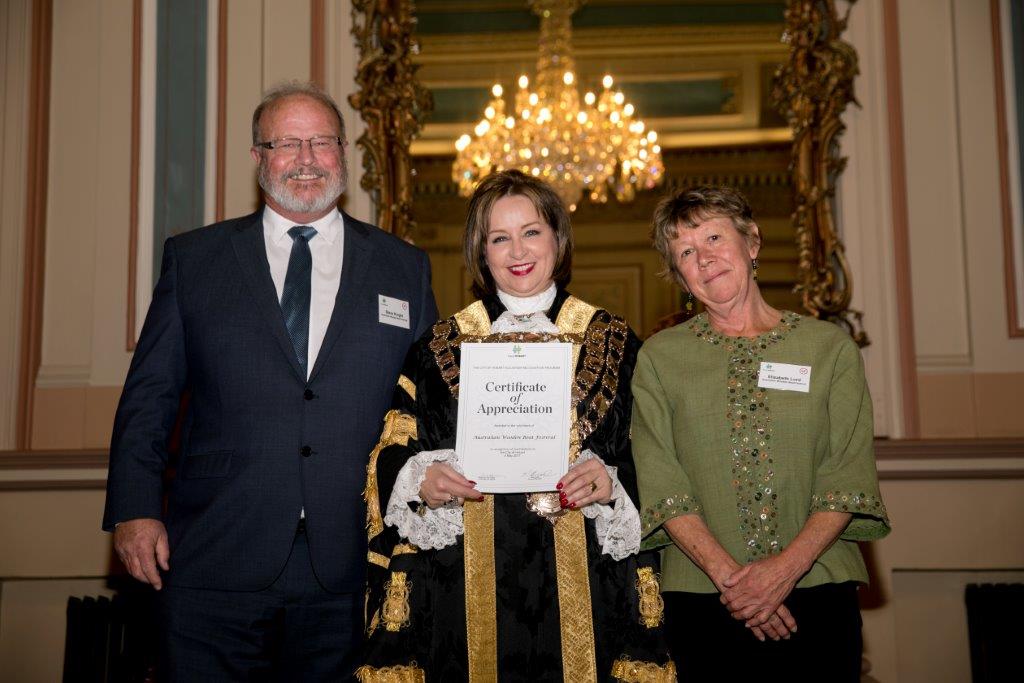 Hobart City Council marked its increased support for the MyState Australian Wooden Boat Festival 2017 with a Certificate of Appreciation for the 400 volunteers who came forward to run this iconic event.  Hobart Lord Mayor Sue Hickey presented the award at a gala Town Hall reception for the organisations that ‘contribute so much to the social and cultural life of our city’.

Chairman Steve Knight and Volunteers Coordinator Liz Lord were there to accept the certificate on behalf of all AWBF volunteers, representing both the all-volunteer Board of Directors and the hundreds of rank-and-file crew who answer telephones, drive boats, staff information booths, ferry supplies and do a multitude of other tasks before, during and after the festival.  Steve commented ‘It was interesting to note all the great work done by so many volunteer organisations in Hobart.  I confess, I was proud that AWBF is one of the largest, with 400 volunteers.  It’s wonderful to have so many enthusiastic people in the community backing us.’

The Lord Mayor described the particular contribution that volunteering makes to the social fabric of our city, how it energises and activates life for so many people and how the shared pride in doing things that make our city better benefits everyone who takes part.

The AWBF has the unusual distinction of attracting scores of volunteers from interstate and overseas, who travel to Tasmania specifically to take part in the festival.  Volunteering Tasmania, the State’s peak body representing volunteer organisations, describes this phenomena as ‘voluntourism’ and calls it a growing trend.  People of all ages are making the decision to visit a place not just to enjoy the luxuries of life and local colour, but to make a real contribution where it is needed, to a project or cause that has meaning for them.

GM Paul Cullen said, ‘Hobart City Council ramped up its support for the MyState Australia Wooden Boat Festival significantly this year.  It’s really important to recognise that while good roads and parks and services are fundamental to city life, there are also intangibles like creativity, heritage, pride and pleasure that draw a community together and bind it into something more than the sum of its parts.  Festivals like the AWBF put a smile on our collective faces and make it fun to live here.  That’s powerful stuff.’