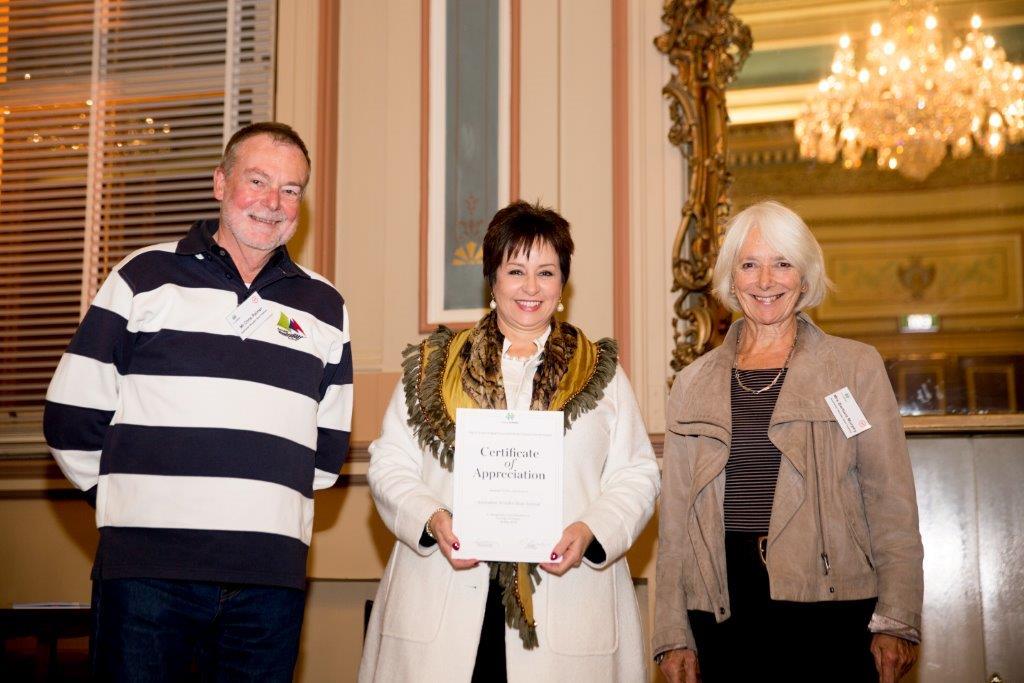 The Australian Wooden Boat Festival was in the limelight again recently, at an invitational ceremony at the Hobart Town Hall.  Board members Chris Palmer and Barbara Murphy were on hand to represent the 435 registered AWBF volunteers who make it possible to present the event every two years.  Chris and Barbara accepted a Certificate of Appreciation from Hobart Lord Mayor Sue Hickey.  The Lord Mayor spoke in enthusiastic terms about the event’s contribution to the city’s social life, its inclusiveness and the wonderful atmosphere on the Hobart waterfront during the four days of the summer festival.  Volunteers Manager Annette Ritchie (who is herself a volunteer) couldn’t attend the ceremony.  Annette lives in Sydney and travels to Tasmania specially for the festival each second year.

Festival volunteers contribute thousands of hours of unpaid work, as well as an amazing range of specialist skills, to make the event happen. Radio operators, boat handlers, information desk workers, Clean Team, site crew, safety marshals, tour guides and data collectors are just some of the scores of different jobs covered by this amazing group of friends and enthusiasts.  “These are real jobs,’ festival manager Paul Cullen said ‘with real responsibilities and hard work to be done.  We treat each other with respect and tolerance and good humour, but there’s no question of standing around waiting for something to happen.  We have 500 boats and 220,000 people to look after and we take that seriously.  I think that’s why the Wooden Boat Festival has such a good reputation – because we work hard to make it so.’

The next challenge? ‘We’re going to need a bigger wall,’ Cullen said.  ‘The trophy wall in the office is filling up with awards and certificates.  Some of them are pretty special, like the Australian Tourism Award we received last year and the Tasmanian Tourism Award for best major event in the state.  We’re not finished chasing these markers – I think they mean something to all 435 of us. It’s recognition for what we do.’