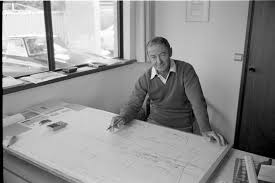 — By David Payne from an Interview with Len

From an early age Len spent much of his spare time around the Swan River and associated waterways, building canoes and improvising with home-made sails. As a teenager in the 1930s he visited Perth boatyards on the banks of the Swan River. Seeing these boats being built inspired him to design one himself at the tender age of 15. The resulting 16-foot hard chine boat was a success and encouraged him to continue designing craft and become involved with yachting in general.

His early amateur design work was done in spare time away from his job in the Public Works Department of WA. As his major interest was boats, he submitted examples of his work and a thesis to the Royal Institution of Naval Architects in London. In 1952, he was accredited, becoming an Associate of the RINA and a qualified professional Naval Architect, perhaps the first in Western Australia.

His title was a novelty at the time as no one in WA really understood what it meant, but, undeterred, he set up a commercial practice working from his home and gradually received commissions. Amongst this early work, he designed the 14-foot DARKIE series for the owner-skipper, Syd Corser, who dominated state and national titles for a number of years.

Although he designed racing and cruising yachts, it was fishing boats that launched his commercial career. For decades they had been low-powered craft modelled by builders based on their experience and their eye for what was right. The introduction of high-powered diesel engines was a significant change and needed someone able to calculate the power and propeller requirements, along with the best hull shape and construction if the craft was to achieve its desired performance. Randell had the technical expertise to capitalize on this need and soon started working with builders to produce efficient and elegant designs. This work then expanded into prawn trawlers, cray boats and carrier boats. These heavy displacement craft were built in wood, aluminium and steel.

He also built and designed small number of ferries, patrol boats and tugs, so Randell was well positioned to take on new commissions as the industrial strength of WA grew from the 1960s onwards. New ports, expanded operations and new concepts meant there was a continued demand for new craft all around the WA coastline.

He also pioneered the introduction of high speed craft in the cray industry, firstly with plywood construction. The operators realised the value in being able to get to and from their cray fishing areas much faster, so Randell designed a great number of craft that could move quickly between port and the cray fishing areas, and also function well as stable platforms for laying and hauling cray pots. Some later designs used production fibreglass hulls.

His self-taught background enabled him to be very self-sufficient, working through his designs in a logical fashion which always covered the significant issues of weight, trim and stability, propulsion and scantlings. Randell erred on the side of adequate strength and was careful to ensure each vessel met its target requirements for strength, speed and stability, even in the earlier days of vessel design when there were no set official requirements to be accounted for. All Randell’s designs had a handsome appearance, and he considered the artistic side of the design process was just as important as the technical side.

Prepared from a 1996 interview with Len Randall by Bill Leonard.