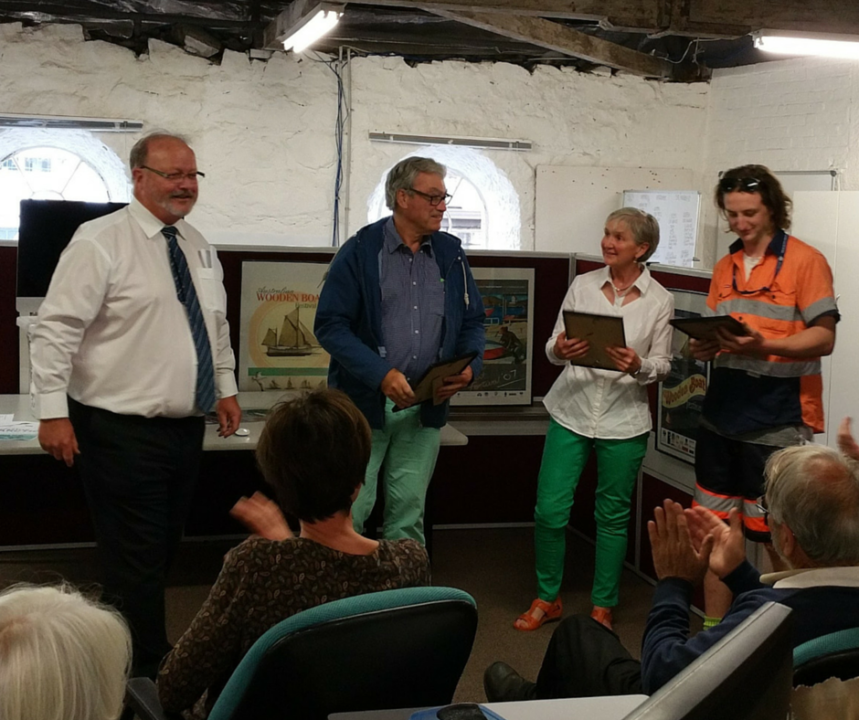 Chairman Steve Knight acknowledged their invaluable contribution and ongoing support for the festival, now an internationally recognised event which brings significant economic benefits to Tasmania.
Although Ian Johnston was still at sea on the East Coast, he was represented by his and Cathy’s son Flinders who accepted his dad’s award. Flinders and Cathy had just returned from a working trip to Antarctica, the first mother and son pair to serve at the same time on an Australian Antarctic station.
Cathy recounted her experience when she approached the Port of Hobart Harbour Master to ask ‘Can we take over the port for the weekend, for a wooden boat festival?’  As we know, Cathy has a way with words, with people and with boats.  The Harbour Master said: ‘Well, I suppose so, yes.’ The rest, as they say, is history.
Andy Gamlin said that he remembered the early days very well, but could not have guessed then that the festival would have grown into such international event.  He said he was very proud of the result and went on to give credit to a great many people who have contributed along the way.  ‘It’s wonderful to see the event in such good shape, with a great future ahead of it.’
All three founders of the Australian Wooden Boat Festival remain supportive of it and two are still actively involved in producing it.  Steve Knight thanks them for their vision, their hard work and their long campaign to ensure its success.

ATL Composites onboard for Maritime Trail 2021

AWBF’s Parade of Sail – Are You Excited?