A Boat By the River

Maritime Marketplace is Buoyant for 2021 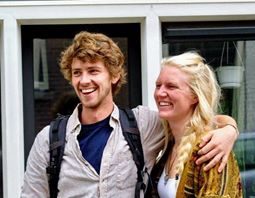 Festival champion Bella Laughton-Clark had the opportunity to catch up with Matt and Lefke Morris to talk about their new build Tarkine, under construction in Dave Golding’s shed on the banks of the Huon River. Enjoy!

Matt and Lefke met while they were working on the tall ship Bark Europa in the Mediterranean. They soon got married, completed their studies in the Netherlands, said their goodbyes to their Dutch sailing family and headed back to Cygnet, Matt’s hometown. In November 2019 they started their joint boat building project – ‘A Boat By The River’.

Matt’s dream was always to build his own boat and Lefke’s was to sail the world as her own captain, and those combined dreams were the impetus for a grand plan: sail to Europe, visit their tall ship comrades and continue their voyage to Lefke’s place of birth in The Netherlands. The pair are also exploring the option of using their vessel for coastal trading and sailing cargo such as fresh local produce to markets around southern Tasmania.

The vessel they are building to see this dream through is a strip planked 41ft pilot cutter designed by Paul Gartside. The swamp gum planking and the tas oak ribs have been sourced locally from small family-owned sawmills around the state, and the pair are planning well in advance for the fit out. A set of blocks made by Matt at his old place of work are waiting patiently in storage and the couple have been stockpiling choice pieces of bronze hardware to deck out the finished product.

They plan to name the vessel Tarkine, which means ‘belonging to’, and believe their little ship will always belong to Tasmania and the community that has helped them. Although Matt said they are aware they have a few more hard years ahead of them, they consider themselves lucky to be able to continue working and doing what they enjoy.

Matt is currently a first-year apprentice at Cygnet Wooden Boats and Lefke works at home for the Bark Europa’s office. They both work three days a week and spend whatever remaining time they have working on Tarkine. Their wages get poured into the endless pit that is a boat (Bring Out Another Thousand), but they have no regrets.

They have been overwhelmed with the generosity and support they’ve have received from all around. The local Fibreglass Shop has taken them under their wing and Matt’s boss Jeremy Clowes – owner of Cygnet Wooden Boats — has been instructive and supportive. In Matt’s words “There are very few places in the world where you can drive half an hour in any direction and find a boat builder willing to give advice and lend a hand”.

Matt closed our conversation with these words “The things you can make with your own hands are the most rewarding. Fair winds and following seas to all!”

A huge thank you to Matt and Lefke for sharing their journey with us, be sure to like their page and we look forward to seeing them at the Festival soon!