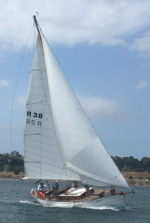 Merlin was built in 1934 by well known Dartmouth shipyard Philip & Son Ltd in 1934. She was the selected design of two proposals for a hard weather cruiser. The losing designer, so incensed, commissioned the build of his own design and “threw down the gauntlet”, challenging Merlin to a race. Merlin lost the race and the Berthon “Gauntlet” class was born.
From the mid 1930’s, through the to late 1970s, Merlin was cruised extensively and almost continuously. This cruising was widely written about under the ownerships of Lord Stanley of Aldeley (RCC) and later Dr. Ronnie Andrews (RCC), earning her a reputation as a sea kindly and extremely capable ship. Merlin completed a circumnavigation in the mid 1970’s with Dr. Andrews. Merlin was then purchased and sailed by John & Rosalie Counsell, from England to Australia in the late 1970s, where she was sold.
Thirty years later, after a 6 month search by Hugh Counsell, she was found in a deteriorating state in a Queensland backyard. She was rescued, trucked to Victoria and has rebuilt over 5 years from 2010 to 2015. The rebuild has included complete reframing, refastening, re-decking and restoration of original interior fit-out.