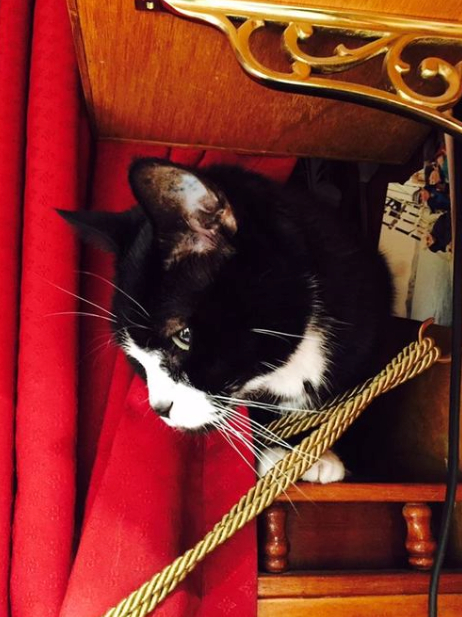 Of all the Jellicle Cats to inhabit the Hobart waterfront, the best-loved was Trim, ship’s cat aboard the two-masted brigantine Windeward Bound for just over 15 years. Trim accompanied the ship from the Tasman Sea to the Arafura Sea, circumnavigated Australia, sailed the Indian and Pacific Oceans and was made an honorary citizen of New Zealand (probably to avoid the hideously complicated rules for importing felines into that country). She lived a sailorly life and had interesting adventures in every port she visited.

Captain Sarah Parry of the Windeward Bound said that Trim was named after another nautical cat, one that belonged to Lt. Matthew Flinders, R.N. when he made his own circumnavigation of Tasmania with George Bass in 1798. Trim kept the local mice on their toes and befriended scores of expeditioners aboard the Windeward Bound.  Like Lt. Flinders, Capt. Sarah was very attached to her companion and grieved to see her go.

To the memory of Trim,

The best and most illustrious of her race, –

the most affectionate of friends, –

faithful of servants, and best of creatures.

She made the tour of the Antipodes, and the voyage around

Australia, which she circumnavigated, and was ever the

delight and pleasure of her fellow voyagers………..

Many a time have I beheld her little merriments with delight,

and her superior intelligence with surprise:

Peace be to her shade, and

Honour to her memory.”

Trim’s memory will be honoured in the name of the Windeward Bound’s new 6 metre whaleboat, donated by the late David Boykett and son David. The boat will become the nucleus of the ‘Future Mariners of Tasmania’ project, designed to continue Tasmania’s long heritage of training capable sailors and sending them to sea.