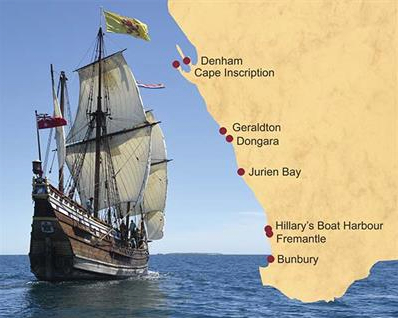 …there’s work afoot.  In the Royal Kingdom of the Netherlands, talk of the MyState Australian Wooden Boat Festival in faraway Tasmania has already hit the media.  Preparations for a major Dutch presence at the 2017 festival includes a team of young Dutch boat builders getting ready for a very big trip.  Owners of the classic tjotters (small sailing craft popular in Holland) are preparing to send them out here for the festival and a fascinating exhibition, to be presented at TMAG, will tell the story of the VOC (the Dutch East India Company) and the quite incredible feats of navigation and seamanship that brought Abel Tasman to our island in 1642. Tasmanian company Blundstone will be a major partner, organising a warm send-off in Amsterdam and the local Dutch community here in Tasmania are coming to the party to offer accommodation and hospitality.  One remarkable project is coming from the famous Batavia Yard (Bataviawerf) near Amsterdam.  It is a carving, suitable for a ship’s figurehead, of the Dutch carpenter Pieter Jacobs.  Jacobs was the man who swam ashore at Blackman Bay to plant the Dutch flag 375 years ago.  Master carvers at the Batavia Yard use cutting edge technology and traditional skills to create master works in wood

The rough is assembled in laminated timber

A detailed mould allows the sculptor to capture the image exactly

The Batavia Yard was responsible for the stunning replica of the 17th century ship that reached Australia in 1629, only to be shipwrecked on the Western Australian coast.  The story of that shipwreck and the mutiny that followed is a violent and bloody chapter in Australia’s earliest European history.  You can read more about the ship yard that preserves traditional methods and skills here:  bataviawerf.nl/who-are-we.html

Meanwhile, Bert van Barr and his team of young shipwrights are eagerly looking forward to their pre-Christmas arrival, to get a start on their own project, the 6-metre sailboat to be constructed at the Wooden Boat Centre in Franklin.  The Centre is generously donating workspace and tools for the team to do the build.  They are expected to complete and launch the boat at the MyState Australian Wooden Boat Festival in February, 2017.

Instructor and shipwright Bert van Barr has started his own blog here:  tasmanian16m2.wordpress.com