Cruisin’ on the Channel 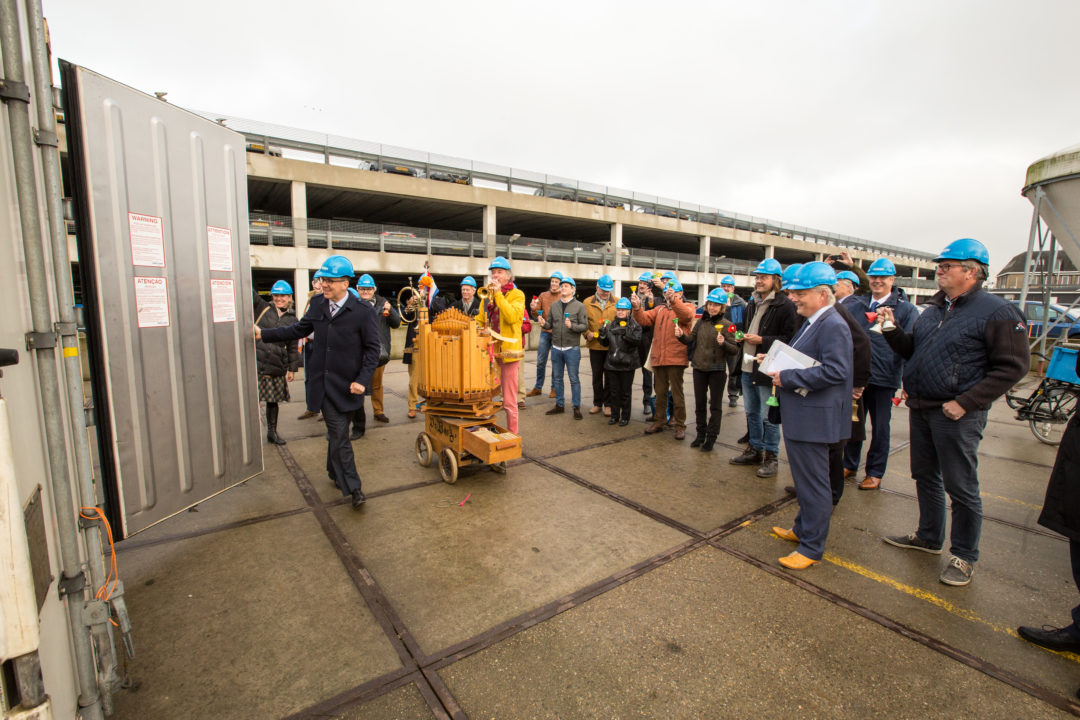 Australian Ambassador to the Netherlands Brett Mason, at the Damen Shipyard closes the door on a Dutch container bound for Hobart.

At the Damen Shipyards in Gorinchem, Australian Ambassador to the Netherlands Brett Mason closes the door on a container full of Dutch boats bound for Tasmania and the MyState Australian Wooden Boat Festival.

Here at the AWBF, we’re grateful for the support of Damen Shipyards Group for our Dutch theme and especially for its contribution to our Dutch Boat Building Project, as well as helping us bring the classic racer Oranje to Hobart for a historic Match Race against the Derwent Class Gnome. “We feel privileged to be involved in this celebration of nautical history and culture, especially since this year we commemorate the 375th anniversary of Dutch explorer Abel Tasman’s landing on what he then called Van Diemen’s Land. It’s a special moment to show the long lasting maritime relationship between Australia and The Netherlands”, says Roland Briene, Damen Area Director, Asia Pacific. “I am very much looking forward to being in Hobart for this event.”

As a ship design and building company, it is only natural that Damen is involved in supporting the boat building project, but they also have close ties with the Regenboog Oranje, the Dutch classic racer that will compete in the Match race event against the local Derwent Class yacht Gnome. “Our goal is to underline not only the special Dutch relationship with Tasmania because of Abel Tasman, but also Damen’s special connection with Tasmania, now reinforced by the design and construction of a new state-of-the-art icebreaker for the Australian Antarctic Division.” The vessel is currently in design phase and is scheduled for delivery in Hobart in 2020. During the event Damen will provide visitors a sneak preview of the design.

Damen is involved in the design and construction of a state-of-the-art Antarctic Supply Research Vessel. Once completed, Hobart will be its home port. The icebreaker is the main lifeline to Australia’s Antarctic and sub Antarctic research stations and the central platform of Antarctic and Southern Ocean scientific research. This next-generation successor to the Aurora Australis will provide a step-change in Australia’s Antarctic capabilities and is uniquely tailored to meet the Australian Antarctic programme’s needs.

In November the Dutch royal sailing yacht ‘Oranje’ was loaded in a reefer container at the Damen headquarters in Gorinchem to be shipped to the Australian Wooden Boat Festival, together with another seven Dutch wooden boats. They have now safely arrived in Hobart. Their owners will follow soon to start rigging the boats and preparing them for the festivities.

For the Australia, New Zealand and Pacific region, Damen operates a service hub in Brisbane. Damen also works with several other Australian shipbuilders and repair yards, where Damen clients can benefit from a local repair, maintenance and spare parts service.

The international shipyards group was founded 90 years ago by the Dutch brothers Jan and Rien Damen. It now operates 33 shipbuilding and repair yards globally as well as supplying a wide range of marine components to the maritime and defence industries. Damen employs 9,000 people. The product range includes tugs, workboats, naval and patrol vessels, high speed craft, cargo vessels, dredgers, vessels for the offshore industry, ferries, pontoons and superyachts. Besides Damen’s own yard, the Damen Technical Corporation builds Damen designs at numerous non-Damen yards all over the world.

The Damen Shipyards Group has been selected by the Commonwealth of Australia as tenderer for the SEA1180 OPV Programme to build a new class of Offshore Patrol Vessels for the Royal Australian Navy. These vessels will be built by Australian shipbuilders in South and Western Australia developing a sustainable shipbuilding industry in Australia.