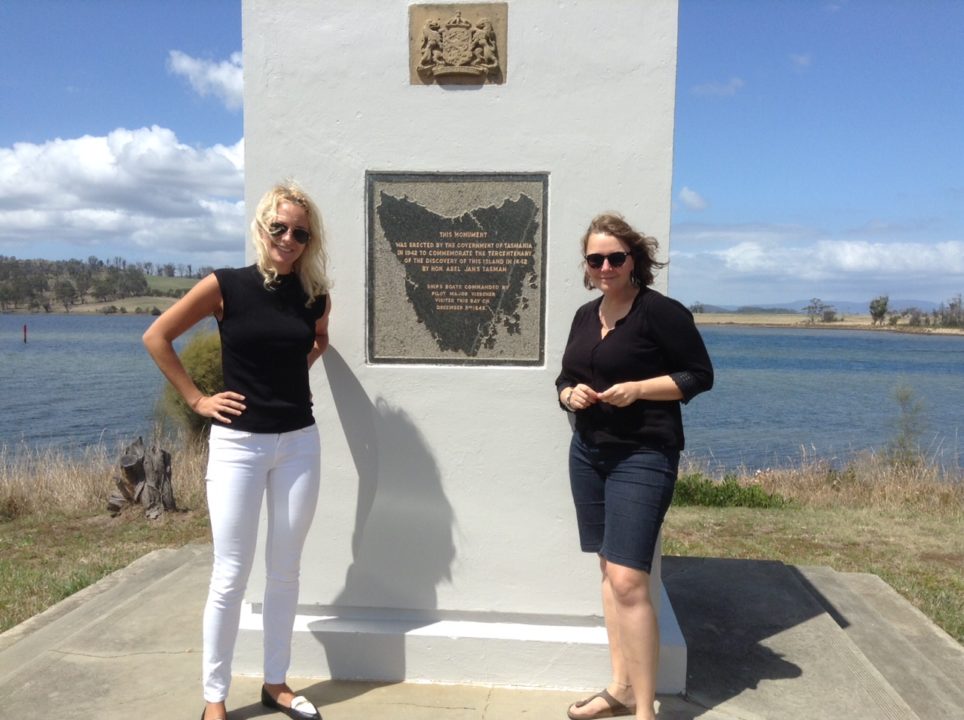 [vc_row][vc_column][vc_column_text]General manager Paul Cullen welcomed representatives from the Embassy of the Kingdom of the Netherlands and the Sydney Consulate of the Netherlands, in Tasmania for an inspection tour of sites associated with the Dutch explorer Abel Tasman and potential sites for Dutch involvement with the 2017 festival.  Trade official Nicoline van Cann and Cultural Officer Femke Withag visited the existing memorial to the Dutch navigator and explorer at Dunalley, near the Denison Canal.  Tasman’s actually landing place (or rather, his ship’s carpenter, who swam ashore in rough conditions) is a stone’s throw away, where the Dutch flag was planted in 1642.  Tasman’s account says that while they saw evidence of local inhabitants, no contact was made.  Tasman was on a voyage of discovery for the VOC, or Dutch East India Company, which in a slightly different form still trades today.

The pair also visited the Wooden Boat Centre at Franklin, scouting location for a proposed project to bring out a team of young Dutch shipwrights from the famous HMC school in Amsterdam.  The plan is to have them build a Dutch-design Bergumer Meer class sailboat, a 1928-vintage 4.75m racer, and then pit it against some of our local talent in friendly competition.  The project has a lot going for it, but will need support to get the crew out to Tasmania and gather the materials needed here.  There’s a precedent – Irish boat builder Mark Redden came to the 2013 event as a guest of the AWBF and the good people of Franklin, to build a traditional Irish currach and launch it at the festival.[/vc_column_text][/vc_column][/vc_row][vc_row][vc_column width=”1/2″][vc_single_image image=”1477″ img_size=”600×600″][/vc_column][vc_column width=”1/2″][vc_single_image image=”1478″ img_size=”600×600″][/vc_column][/vc_row][vc_row][vc_column][vc_single_image image=”1476″ img_size=”full”][/vc_column][/vc_row][vc_row][vc_column][vc_column_text]Nicoline and Femke were treated to an exclusive tour of the WBC, where they saw for themselves the potential to handle such projects with ample space and equipment.  AWBF Chairman Steve Knight will attend the HISWA Boat Show in Amsterdam this month, to meet potential sponsors and participants.  2017 will mark 375 years since the great Dutch explorer arrived in Storm Bay, more than 130 years before Lt. James Cook.[/vc_column_text][/vc_column][/vc_row]