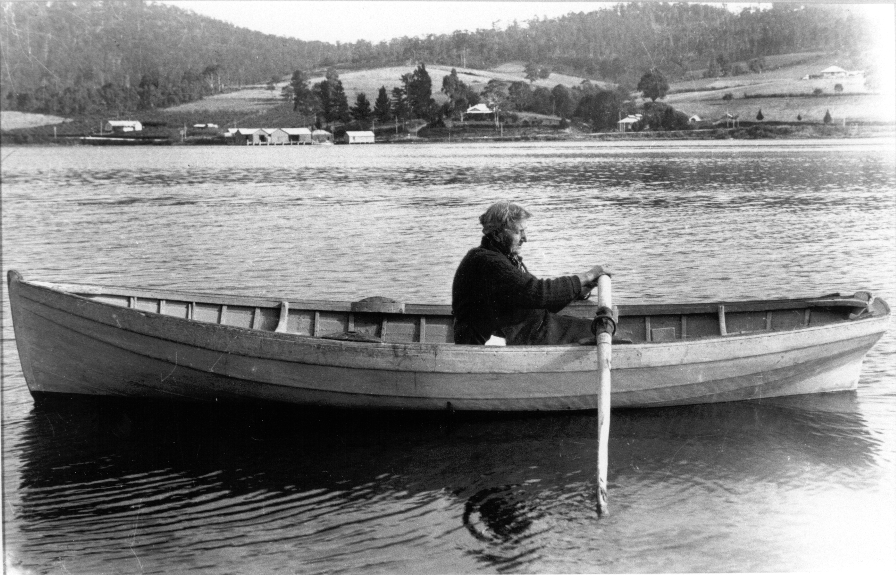 It seems like a long time ago, but just four months ago the AWBF presented the Maritime Trail across Tasmania. Not long after, dedicated ‘boatie’ Denis wrote in to tell his story from the newly invented event. Here’s what he had to say.

I enjoyed visits to two boatyards on the Saturday of the Maritime Trail. I’d like to congratulate the organisers and volunteers for putting the weekend on and especially the people at the boatyards for giving so generously of their time and knowledge, not just for one session. Ned Trewartha had a finished Bill Foster design dinghy ready for the Peregrine School raffle and one part-built, useful for showing construction techniques.

At Wilsons Boat Yard, some four speakers talked on the history of the boat-shed, of current work on a Carmen design yacht, the conversion of a launch for a battery-powered electric motor and from drawings to a slide-show of all construction stages of a boat based on a Maine lobster-boat, the Neilma G. Terry Lean, one of the boatbuilders at the yard, had his Carmen design yacht Carefree in for a complete interior design refit and repair. It is a sister-ship to the 1963 Sydney-Hobart yacht race winner.  The 1920 Derwent River speed launch Sandpeep, has had a major overhaul at Wilson’s along with its conversion from petrol engines to a battery-powered motor.

One of the stories on the Australian Wooden Boat Festival website is on the Neilma G:

It was a generous session from all speakers lasting an hour and a half and finishing in their new boat shed.

I visited Ned Trewartha’s boat-shed/home at Woodbridge and Wilson’s boat-sheds just south of Cygnet, partly because it was a short ride over Woodbridge Hill, although I didn’t count on the severe hail and rain storm coming down from the top of the hill to Cygnet. That was just part of that weekend’s weather. Another thought in choosing the two was Mrs Wilson’s dinghy.

The original dinghy is in the Maritime Museum of Tasmania’s collection. Ned Trewartha drew the lines from measurements made by Michael Staples, then made three beautiful replicas of the dinghy, one of which he exhibited at Wooden Boat festivals. Years ago, when I first heard of Mrs Wilson’s dinghy I assumed that it had been made at Wilson’s boat yard, until Ned told me of the details which are included below, attached to a photograph in the Maritime Museum. I had a chat with one of the Wilson family, Michael Wilson, at the Boat Yard on the Saturday and he mentioned the long distance Mrs Wilson rowed regularly each week to where her husband worked. She rowed from the Boat Yard in Gardners Bay, to Police Point and from there to Esperance by land.

The Maritime Museum has a photograph of the dinghy with Mrs Wilson on the oars (featured black and white image):

“John Wilson married Dinah Goodby in 1872 and soon presented her with this dinghy. Every Monday and Friday during their married life Dinah would row the 10 km between Cygnet and her husband’s workplace at Esperance. She was still rowing it 65 years later aged 88.

Mr Wilson had the dinghy built by ex convict Walter Paisley who was a youngster at Point Puer (Port Arthur). He received a pardon in 1847 but remained a probationer for 15 years.”

The design of the dinghy is very much that of a Whitehall dinghy which is curious given that they developed in New York, except that Ned had found that the supervisor of the boat yard at Port Arthur had been working in Boston boatyards before coming to Port Arthur. The difference was that most Whitehalls had carvel hulls, whereas Mrs Wilson’s dinghy is carvel but with the top two planks clinker.

From The Classic Boat, by the editors of Time-Life Books, 1977:

“The Elegant Whitehall. The perfect row boat is quick and easy to the oar, stable and dry in the water and pretty to the eye and roomy enough for one or two passengers or light gear. Just such a craft is the Whitehall, developed in the 1820s as a water taxi and ship chandlers boat in New York Harbor.”

The hull was 16-20 feet long where Mrs Wilson’s is 12 feet long. The distinctive features of a Whitehall are the wine-glass shaped stern transom which eliminates drag through the water, deep skeg (the stem of the wineglass) which helps keep the boat on course and a fairly narrow beam. For comparison, my clinker dinghy, essentially a work boat, built for me by Reg Fazackerly in 1973 is 12ft long with a beam of 5 ft whereas Mrs Wilson’s dinghy has a beam of 4ft 1in. The photo of Ned Trewartha’s replica, taken from the stern end shows all these features.  I imagine that rowing a Whitehall would be enjoyable with such a sleek hull.

Thanks to Denis for writing in to us, we sure had a ball showing you around our beautiful, quirky boatyards. If you missed out, be sure to watch our latest film project, The Boat Builders, first up we feature Wilson’s Boat Yard. Watch here.