Aussie 18s in the News 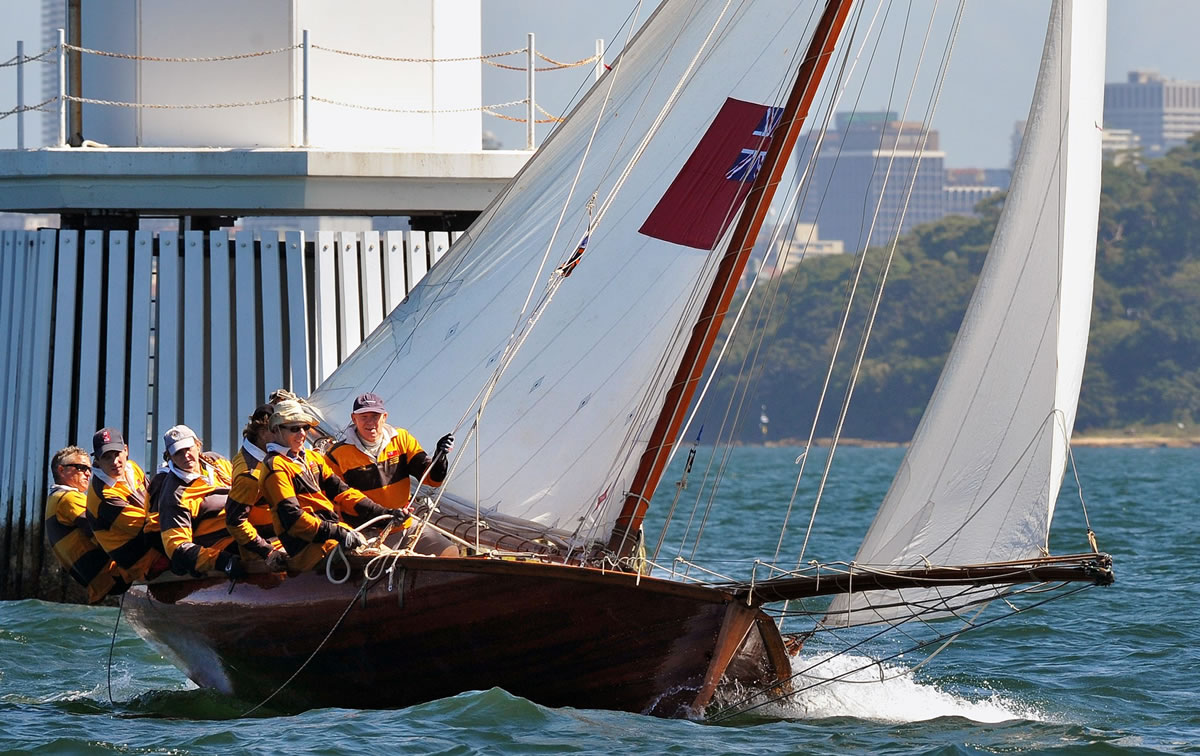 There’s word around the slips about a possible Hobart showdown in 2019 between The Yanks (in the shape of the East Coast sandbaggers) and the Aussies (look to the classic Sydney 18-footers like Britannia, displayed at the Australian National Maritime Museum). Ian Smith’s exact replica of the 1919 craft Britannia put in an appearance at AWBF 2017. The extreme length of the jib and boom had many visitors scratching their heads – how could a little 18-foot boat carry that much sail and avoid going airborne? Well, they did, and they still do, as evidenced by the Sydney Flying Squadron sailing modern replicas.

Off Center Harbor, the fast-growing video website for sailors was suitably impressed when they saw Britannia and recently released a new video on these classic boats. CLICK HERE to see the video and another on Victorian couta boats. It will cost you nothing to see the video and ten more of their best, but be warned, the website is seriously addictive if you’re into wooden boats.

OffCenterHarbor.com is a membership website with 1,000+ professional videos/articles on wooden boats, including topics such as boat handling, repairs, maintenance, boat building, and getting aboard legendary boats. It’s worth checking out.

Meanwhile, on the East Coast of the USA, the classic 19th century fast sailboats called sandbaggers are again tearing through the water, descendants of the working oyster boats that once delivered fresh shellfish to the tables of the Rockefellers and the Vanderbilts in their New York City mansions. Sandbaggers get their name from the practice of moving bags of sand ballast from one side of the boat to the other to keep them upright under a huge press of sail, racing their rival skippers to get to market first for the best prices.

“To say Alcyon is extreme would be an understatement. She’s like a soup bowl carrying a pillowcase of rig. With her length overall of just 22ft 11in (7m) but boom and bowsprit extending out to 68ft 11in (21m), the cloud of canvas overhang is absolutely nuts – she looks like a boat that you’d really expect to see in black and white, when our yachting ancestors were zealously over-rigging yachts to win silver on sunny summer regatta days.”

It turns out that Ian Smith, with Britannia and a gang of his mates went to Annapolis, Maryland recently, took on the sandbaggers in their home waters and in a distant echo of the 1983 ‘Thunder from Down Under’ that won the America’s Cup, the cheeky 18-footers won the day. Now, there’s honour at stake and word is, a return match is on the cards. Likely champions? The famous sandbaggers Bull and Bear from the US National Sailing Hall of Fame might just wet their sails in the River Derwent. Stay tuned for more news.