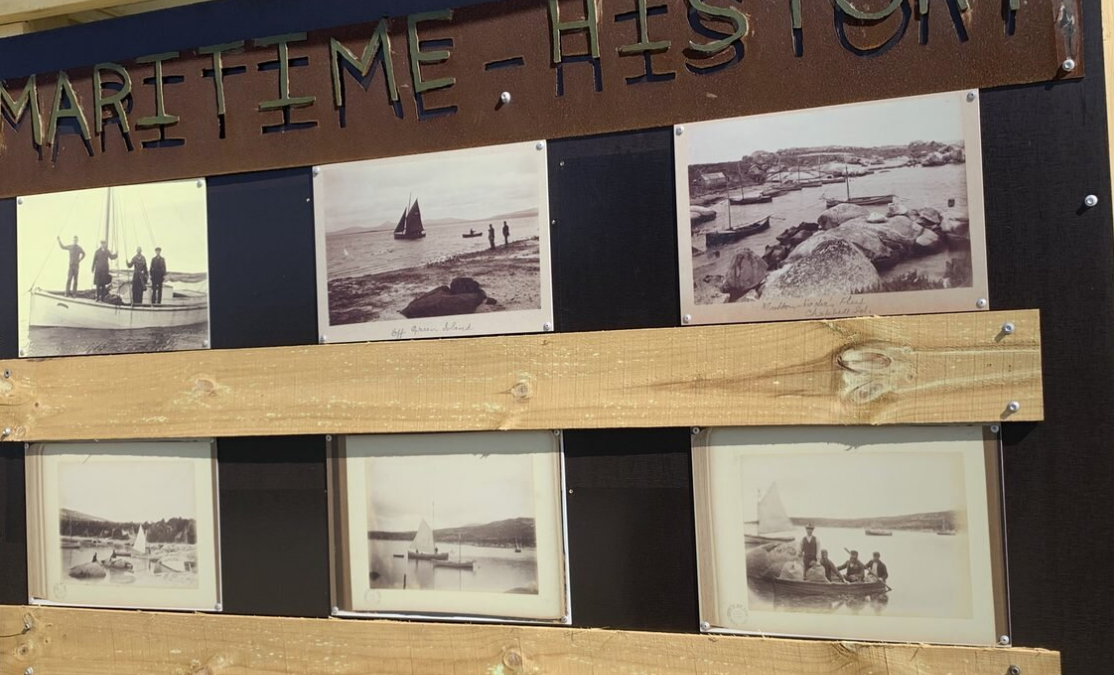 Festival friend Tim Phillips from the Wooden Boat Shop in Sorrento spoke with AWBF Inc. Board Member Mark Chew some months ago, about one of his many trips to Flinders Island (Northern Tasmania). With many lock-downs around the country, we thought we would share with you the story from Mark’s blog (Southern Wooden Boat Sailing) as we plan to holiday at home these school holidays.

Those of you who are lucky enough to be on the email list for Tim Phillip’s irregular newsletter may have already seem his latest report but its surely worth republishing and almost definitely worth re-reading.  Nobody in Australia would know more about cruising the Islands of Bass Strait than Tim. Of course, some fishermen have intimate and generational knowledge of their particular patch, but when it come to finding suitable nooks and crannies to shelter, learning of the history and finding adventures in Bass Strait then Tim is the man you want to listen to.  Ok … so, this trip wasn’t under sail like most of his hundreds of other voyages made on STORM BAY and JANE KERR, however if the detailed information and down to earth story telling doesn’t get you out of your Whitsundays/Pittwater/Sydney Harbour cruising mentality then nothing will!

After a tumultuous 2020 and a busy Christmas period we decided on a turnkey cruise! SQUALLY COVE is beautifully set-up and so, so easy to live on. The Kent Group — I just love the place… Fishing, walking, swimming, scenery, it’s got the lot.  We spent out first 8 days mooching around the islands. We didn’t get away until after lunch on the Saturday prior to Australia Day weekend (I definitely didn’t want to be around on the 26th!).

We were never gonna make to The Kent Group within daylight hours and it was such perfect weather that weekend. So we just cruised at 8-10 knots and had a lovely dinner going past the Prom.

I did the first watch, and then handed over to my trusty cousin David. Next thing I knew we were in House Bay at about 0230 on Sunday morning. I just love waking up at Deal Island, it’s extremely special.

We only took 3 meat meals, so the first day is always a scramble to catch some fish. Our usual gummy patch was unproductive, so David took us offshore a few miles to one of his old shark fishing spots — bingo! We have a gummy… So, the pots go down that evening and we haven’t even been ashore yet. Next morning, we were lucky to get a nice big Bass Strait cray.

It was freshening from the northeast even early, so we decided to breakfast in Wallibi Cove (I hadn’t been before). Nice cove but definitely just a day anchorage due to the fact it’s strewn with boulders for the anchor chain to catch around. As you can see from the distance it was freshening with a northeast gale to come later.

In the early history of The Kent Group, I understand they had a sealing base at Wallibi Cove, and I’ve been told there lies the remains of a large try pot (used to render the oil from the blubber of seals). I looked around and couldn’t find any ruins.

Looking toward Indian Head on Deal Island across Murray Pass. Little did I know a day or so later we would be sheltering in Little Squally (just around from Indian Head) in the nor-easterly gale.

One of the many activities when cruising The Group are the marvellous walks on offer. On Deal there is the lighthouse walk, being 1000 ft. up its strenuous and if you survive, I suggest you walk down from there to the airplane crash site.

There’s a record for the run from the jetty to the lighthouse which I believe stands at about 23 minutes. Sam Phillips is keen to have a go at the record after he returns from the Olympics!

Another walk which we love is to Little Squally Cove, see above the beautiful, naturally sculpted trees.

The watercress Matthew Flinders planted in circa 1798 still survives today. A few days into our time at The Group a gale from the nor-east eventuated, House Bay became untenable, so we shifted around to Little Squally where we had not laid previously. It was fine there but when the breeze eventually came from the west it became time to shift!

After seven days at The Group, we moved on to Killiecrankie. With over 100 islands the Furneaux Group offers outstanding cruising, I reckon one could spend a month going from anchorage to anchorage and not lay at the same place twice.

The fishing’s good, pike and whiting are plentiful. They’re the biggest whiting I’ve ever caught! One fillet is a feed! If the weather packs it in one can always procure a mooring from Alan Wheatley, hire a car and drive around Flinders Island. The hire company will gladly deliver the car to either Killiecrankie or Lady Barron. As the weather wasn’t the best, we did a day trip across Inner Sister Passage to Inner Sister Island.

It was fairly fresh, with a big roll and care had to be taken getting onto the beach. With our 9.5 AB hard-bottomed rib and electric outboard we just timed it nicely between the sets. We loved walking the beach (no footprints on these beaches in Bass Strait!). Due to the roll, we didn’t walk up to the homestead which is really a must if you haven’t visited before. It’s wallpapered in ancient newspapers and it’s just like the owners walked out 100 years ago.

I never tire looking at the mutton birds (short-tailed shearwater). They leave their nest in the Bass Strait islands and migrate to the northern hemisphere for their summer and return to the very same burrow for our summer — on the other side of the world. Babel Island, on the eastern side of Flinders Island, holds the largest population of mutton birds in the world (approx. 2.8 million pairs).

Another front was on its way, so we ran down to Lady Barron, which is located in the Franklin Sound, on the south eastern end of Flinders Island. Into the car and off to Flinders Island’ newest eatery at Whitemark. Magnificent food, on the water and looking out west over Bass Strait.

I couldn’t believe it that night driving back to Lady Barron on the outskirts of Whitemark there’s the blue lights in the distance, “breath in here sir” I reckon there were only 2 cars on the road that night! Luckily it was all good on our end.

Puncheon Island. Cousin David’s father (my uncle Johnny) used to own and live on this island in the 1980s and 1990s. It was off we went for a nostalgic visit! We hadn’t visited for over 20 years.

Johnny had purchased a house in Sorrento as the island was a bit much for him in his 80s living by himself. On his last stint at Puncheon Island, he was found with the dinghy painter tied around his waist, drowned. To this day we don’t know what really happened. Subsequently the island was given to RT Edgar (when Will Baillieu was there) and it was sold to a lady I’ve never met who became known as Princess Patty of Puncheon Head.

This is the view looking east from the house with the wreck of the Farsund(1912) in the distance. Johnny’s old shed had been replaced by quite a lovely cottage. Unfortunately, it looked as though it had not been lived in for some time. Apparently, Patty has relocated to Whitemark. It was extremely moving for both David and I to return to Puncheon Head and we both thought it was much more beautiful than we could recall.

For three days it was quite fresh, so we had a great poke around the island. This is Palana, the launching ramp, looking out towards Inner Sister Island. That little stretch of water, Little Sister Passage is highly treacherous in fresh conditions, wind on the tide. There are holes there that are 150m deep. This is the deepest section of Bass Strait, with a tide running through at 5 or 6 knots it can be super dangerous. One well known fisherman friend of mine shot all his pots here once and lost the lot!

So, here on a tiny, out-of-the-way settlement on Cape Barron Island, they’re leading the way in preserving the rich history of Australian maritime culture. Futuristic… This presentation was out on the street.

A cray dinghy approx. 18’ (these were used and launched from the bigger Bass Strait cray craft). To me a dying wooden boat is more interesting than living boats constructed of alternative materials… It’s still a thing of beauty. I love the unsanitised waterfront!

We lay between Cape Barron and Long Island in what is a very safe anchorage in most weather. So a visit to Long Island is very interesting, here is the new house built right in front of the old house.

The old house still has the original wooden pail roof underneath the iron updated iron roof.

The three-week cruise is coming to a conclusion, David, our trusty crew has an appointment with a winery in country Victoria, so we drop him off at Killiecrankie on the Thursday morning, so he can get back to Flinders for Saturday. Trouble is that lockdown looms! So, for all the trouble of getting home, David was grounded. As for Sally and myself, back to The Kent Group for the last few days.

This cottage is where Stephen Murray-Smith used to stay on Erith Island. The below image is the view from his window. Stephen has passed away, and now his son David has the lease, unfortunately for this return trip we just missed him by a couple of days.

Prior to Stephen, Jack Leurig lived in the cottage, he built the 36’ carvel planked cray fishing craft Mirrabooka on the banks.

Bass Strait, Flinders Island, wonderful cruising. This year the weather wasn’t great, but we work around it and try to make our travelling days only in good weather.

Tim and Sally Phillips are the owners of the Wooden Boat Shop in Sorrento, Victoria and bring a contingent of wooden couta boats to the AWBF each festival. They have been integral supporters of our event for many years now.

And in next month’s newsletter, we hope to share a story with you, direct from Flinders Island as Britannia owner’s, Anne Laughton and Andrew Clark re-trace the boat’s history and find the exact location it was built in 1898. Stay tuned!