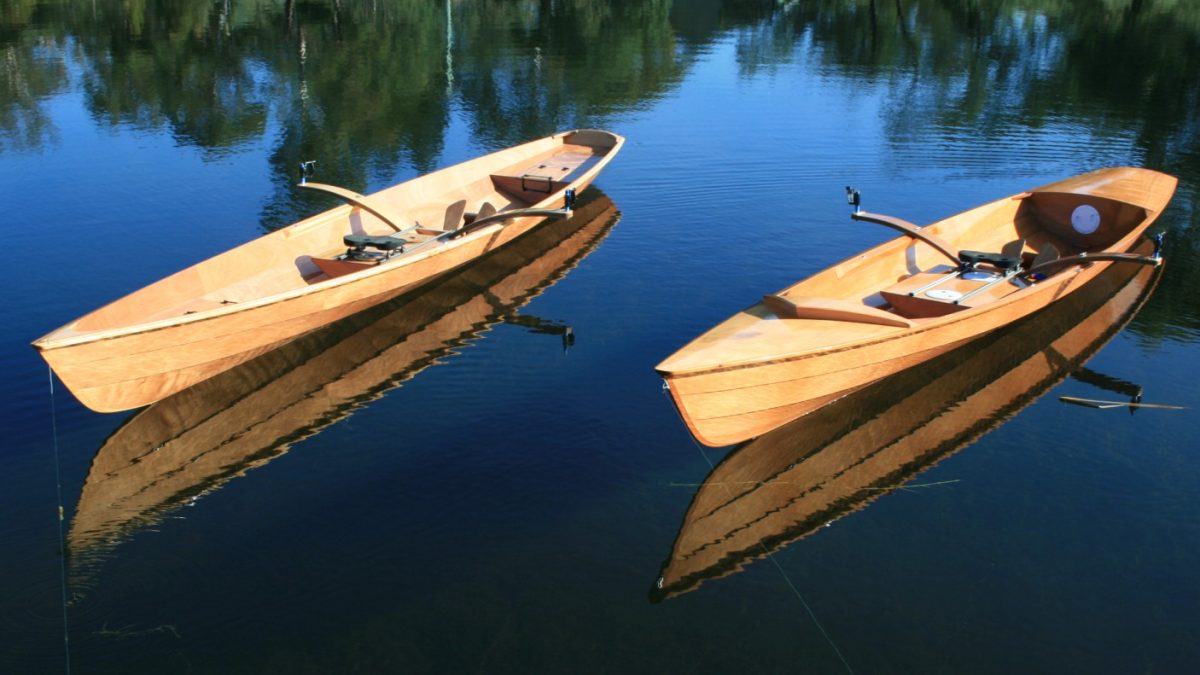 Allan Witt is an award-winning Tasmanian designer. His attention to detail and entrepreneurial drive has brought joy to many recreational rowers. Further, he has developed the boats and business plan for a recreational rowing movement. It is time to hand the baton on to those who can scale up to the next level. It’s an exciting story and opportunity.

Allan began as a social entrepreneur in 1984 by designing furniture and setting up a factory to create employment during that recession.

Roll on to 2007 and Allan got back to his roots in boats by winning the Australian Wooden Boat Festival’s (AWBF’s) design competition for a recreational rowing boat. He drafted his design in 1990 for Jackie, his wife. Jackie still hits the water each Saturday, weather permitting, with a group that sets out for one of the numerous harbour-side cafe’s on the Derwent. The Hobart group is a good example of how to foster a recreational rowing movement. Yes, you need the right boats for the pleasure in rowing, but the genuine and supportive conversations over coffee have ensured that this group has thrived since it began in 2014.

The AWBF named the design the Derwent Skiff and Allan made it available in kit form for home building. Part of its success was the clever building jig; supporting novice builders and assisting them to achieve excellent results. The clinker hull was beautifully resolved and the curved laminated riggers became a signature detail.

Then came the demand for lighter boats for easier car-topping. The result was the light-weight Derwent Skiff, fully decked and with cockpit drains. Designed and with a novel building method, the light-weight version has the same clean surfaces as the original (classic version), making maintenance easy as. One of Allan’s guiding design principle is: “If it is not easy to do, it’s unlikely to be done.”

Subsequent developments in the ‘skiff’ genre are the double Derwent Skiff (serious fun for two people and available in kit form) and the Derwent Super Skiff. This is a shorter boat that is designed for one person; women, children and lighter men. It is still in development but has a round-bilged hull and uses a glass/cork/class composite sandwich. The weight should be sub 20 kg. It will meet all the requirements for coastal rowing competition, although it will need to carry ballast to bring it up to weight. It has the higher stability of recreational boats compared with coastal boats; designed for competition. Derwent Super Skiffs will be a little slower than boats specified for competition except, maybe, for catching waves. If the fun is in participation, who cares! The advantage of higher stability is the lower risk of capsize and greater comfort when used recreationally, especially when solo.

Customers also sought recreational rowing boats with enough stability to comfortably take children fishing, to easily step onto a pontoon, and carry an efficient and uncluttered sail. The result was the highly successful Derwent Raider. It began as a plywood clinker hull but Allan has now made a round-bilged version with a production mould; making glass/cork/glass composite hulls. The next stage in this development is to make a deck mould too.

But Allan’s developments go further. Derwent Raiders have been scaled up as doubles (two rowers and greater sail carrying capacity) and stretched as Derwent Adventurers. They can take two sliding seat rowers or one person with a load of serious adventure/expedition gear.

Allan is keen to support a new operator to pick up from where he needs to leave off. Enquiries to allan@wittdesign.com.au. Read more at http://www.rowandsail.com.au/holding/wp-content/uploads/2020/03/Recreational-Rowing-A-Designers-Career.pdf