My First Boats are back! 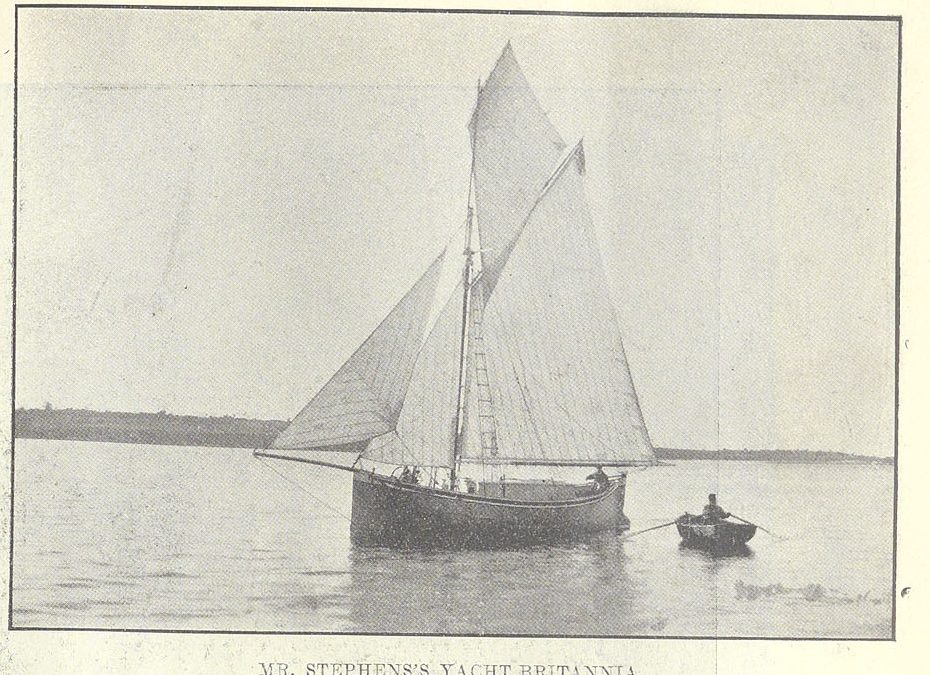 Off the back of releasing our latest Boat Folk film, featuring Britannia, it inspired her owner’s to look at where this story started?

Let’s go back in time on Flinders Island……

In 1897, Charles Stephens (born in SA, 1874) was preparing to become head teacher at Cape Barren Island, after his father, Edward Stephens retired earlier that year. As Charles took over the role, he soon realised he needed his own mode of transport. In 1898 Britannia was commissioned to be built by Richard Davey for Charles Stephens, to make life easier for him to travel around the Islands and to Launceston for supplies. Charles Stephens was a well liked man in the area, and had a great relationship with the Indigenous people, who were transported to the Islands prior to his existence. His wife, Margaret Emily (married in 1898) was a teacher also, and both were respected missionaries.

Charles tried his best with his teachings, but with sickness and the harshness of the Islands, he retired from teaching in 1905. This is when Britannia was sent south for sale. Charles was also in trouble for taking yachting trips (on Britannia) during school hours (Tasmanian Ancestry, 2006). Charles went bankrupt, devastated, he moved back in with his parents for a while. He eventually moved to Victoria and remarried. Charles and Margaret (Maggie)’s son, Edmund Stephens, went on to be Scoutmaster at Hutchins School.

Most evidence and references to Charles Stephens, come from the Tasmanian Aborigines and Muttonbirding document – an interesting read and a great insight into life in the Furneaux Group.

Richard Davey, the builder. Richard Davey resided at a place called the Apple Orchard, on Cape Barren Island. He was a sheep and cattle farmer, and a well respected boat builder in the Straits. He had previously built a vessel called Coogee, and one called Syren. Syren was a 33ft x 9ft smart looking trading cutter, built out of Hardwood and NZ Kauri. Richard’s In Laws, Mr John Lee and Mrs Bridget Lee were some of the first settlers in the Straits Islands and are believed to have resided on the islands (including CBI, Little Green and Great Dog) since 1826 (Tasmanian Aborigines and Muttonbirding document). It is believed NZ Kauri was often used for boat building at this time, as it was strong and hardy, and often came off shipwrecks and direct from NZ off ships making the journey to mainland Australia.

Below is an approximate timetable of movements, pulled from newspapers at the time.

A journey to Flinders Island….

Clearly, for a 32ft wooden vessel, Britannia was very active, constantly on the move around the Islands. From missionary sailings, to delivering cargo goods, Britannia was often seen in the Tamar and as far south as Hobart often with many people onboard. But there is a gap from Britannia being built, till early 1901 and there was always some confusion about exactly where she was built. So Anne and Andrew recently packed up their van and headed to Flinders Island, to attempt to find out any further information.

Flinders Island is just one of 52 islands in the Furneaux Group, at the top of Tasmania. It can only be accessed by boat, plane or freight barge. Many many ships have been wrecked off these islands and they are notorious for shallow waters and rough seas. Anne and Andrew caught the cargo barge over, which leaves Bridport once a week. An 8 hour journey. After arriving in Lady Barren, Anne and Andrew set up camp and started their research. After joining the local Facebook group, they started to get a rush of emails. Deb Robinson was one of those writing in, as she had direct descendants from the Stephens family (see her online blog here – which has many references to the Stephens family and early life in the Strait Islands). Deb was an invaluable contact on the Island. Although she lives in Launceston, she ironically was also flying in with her parents Peter and Joy, the day after Anne and Andrew arrived.

Anne and Andrew caught up with Deb and her parents a few times to share tales of the times, and Deb’s father even has a model of the boat Coogee which was built by Dick Davey Junior when he was a little boy, as Deb’s Grandfather owned the sister ship Coogee. Deb directed Anne and Andrew to Richard Davey’s property near a place called ‘The Apple Orchards’ on Cape Barren Island, so they hired a boat to take them to have a look from the boat. Local legend James Luddington was the skipper, and of course he too had plenty of history to share.

Anne was always told the ‘Brit’ was built at The Apple Orchards by her Grandfather, Alfred, but were also given information referring to her being built at Big/Great Dog Island, although there was never any written evidence. So after speaking with locals with direct family history, it was decided the build location had to be at The Apple Orchards as this was Richard Davey’s home, and where he built the sister ships, Coogee and Syren. Anne and Andrew also visited the Furneaux Museum, where volunteer Lois also shared local stories and tales.

A humbling experience to find the builder’s grave, the build location and to meet locals with strong family history to the owner, Stephens and the builder, Davey. A week spent exploring, researching and learning about life in 1898. All made possible and even better by the locals met during the journey, who were extremely welcoming, helpful and inviting. Anne and Andrew are committed to returning to Flinders and Cape Barren, so you could say, this story is to be continued….. Stay tuned!

All images supplied by Anne Laughton and Andrew Clark.

A huge thank you to Deb, Peter and Joy Robinson, James Luddington, Gerry and Joan Willis and Lois from the museum. Also to the community of Flinders Island who welcomed Anne and Andrew. Now, to book adventure number two.

Anne and Andrew completed a full restoration on Britannia in 2006, which took two years. See the album here on our Facebook.