A Boat By The River, The ‘Tarkine’ Story

We’re Back! Introducing the Parade Of Sail 2021! 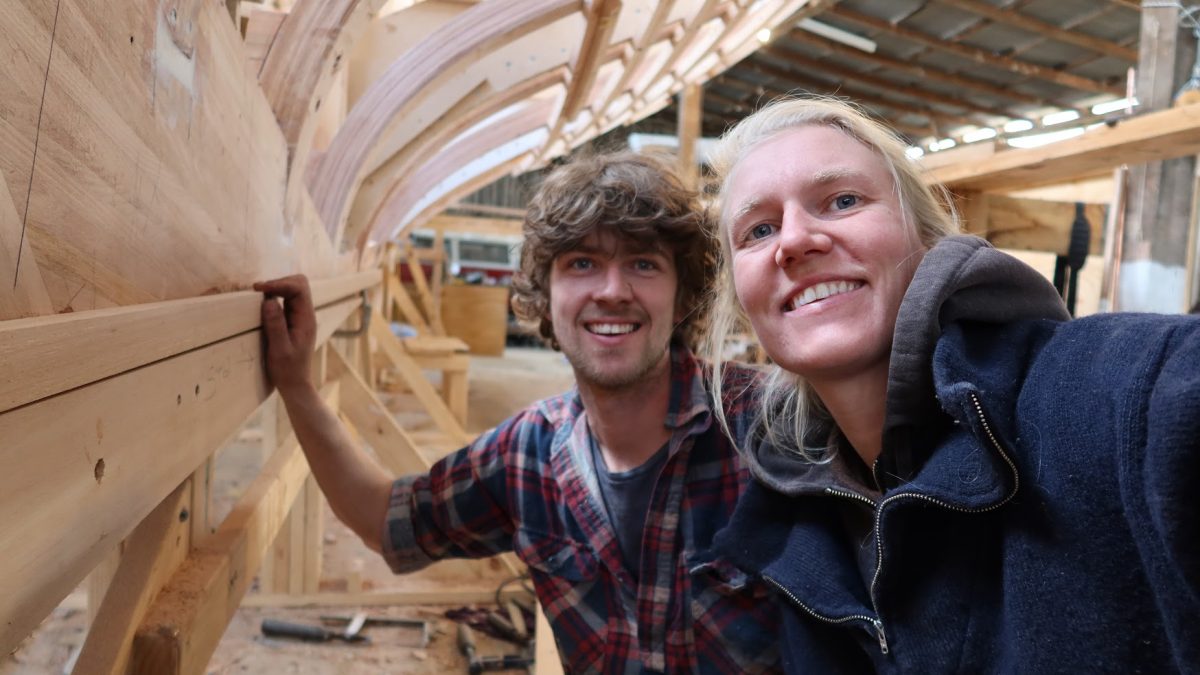 A Boat By The River project – Tarkine sails on

For many of us the COVID-19 pandemic saw us spending more time at home, baking banana bread and home schooling. For some of us, it provided a great opportunity to get stuck into some projects we’ve either been putting off or haven’t had the time to do. For Matt Morris and Iefke Van Gogh the pandemic was the perfect opportunity to get stuck into their wooden boat Tarkine and make some serious progress. You may remember our story on their project from back in April, look at them now!

A boat by the river.

Over the past couple of months we have been busy with the build of “Tarkine”.

By early September we had finished all the laminated frames and moved on to planking. The tasks so far in this build remain to be repetitive and labour intensive, from finishing our 18 frames to the countless planks we are laying. In a good day we can fix about 8 planks, which roughly equates to 240mm (the girth of Tarkine is over 3m).

All our planks are fastened to the frames with bronze screws and edge nailed with bronze nails, and also glued with compset epoxy from our local fibreglass shop Hobart. During planking we have used at least 90 litres of glue.

During the colder winter months we turned to rebuilding our fordson major. This engine is about 50hp and was built in 1961, but the age really does not show internally. After totally pulling the engine apart we concluded it did not actually need a rebuild but we could only have known that by doing what we had done!

We stuck to the plan and bought a full rebuild kit, the engine is not totally back together but it will run by the end of the year.

We hope to finish the planking soon, as all we see and find is sawdust or epoxy glue, for a day of planking we spend about an hour sawing and thicknessing the wood.

Our foot paths are saw dust, our laundry goes in with sawdust and often comes out with more , we light our fires with it and a good salad is generally defined by the lack of sawdust.

And epoxy, well we have had a few more hair cuts than usual..

We are not trying to scare any soon to be boat builders as we are also enjoying the adventure of boat building so far, the immense satisfaction of watching our boat properly take shape as we plank harder and faster each day just to watch her grow and transform.

Thankfully our employment with Cygnet Wooden Boats has continued these past months. This helps pay for the odd load of wood or a fresh batch of glue, and also obviously food to eat!

The upcoming Maritime Trail brings something to look forward to for many people including us. We have been discussing with the owner of our shed Dave Golding to open our large doors to the public for this event. We plan to have “Tarkine” on show, Dave’s spinning machine for caulking cotton running, numerous boats of different ages and types on show plus the machinery involved and some coffee, tea and nibbles available to encourage engaging conversations with the curious public, who rarely see inside a shed such as this.

We look forward to seeing you all there!